The Seahawk defense is allowing the 12th lowest 3rd-down conversion rate at 37%. Should it count as a weakness for an otherwise top-of-the-league unit?

Is getting off the field on third down important? After much study and analysis, I've reached a conclusion-- actually, it's more like a discovery-- hell, it's a freakin' revelation:

Teams just aren't punting on 1st and 2nd down.

Snark aside, the meaningful implication here is that preventing third down conversions is not the absolute measure of a defense's ability to get off the field. They can force a turnover on an earlier down and still be good; they can give up a string of conversions on earlier downs and still be bad. It's just that the treacherous valley of third down tends to lie astride the golden path leading to the promised land of fourth down, so it gets a lot of notice.

And subjectively, when a defense reaches that (allegedly) critical third down, we think "here's their chance!" It's like watching an offense reach the red zone with an opportunity to score a touchdown. C'mon guys, you've made it this far, punch it in / punch 'em out.

More objectively, if your opponent gets a first down, you've failed to stop him and he now has three more chances to move the ball downfield.

But let's try wrapping our minds around a warped and twisted perspective: When your opponent gets a first down, they failed to score points and you have 10 more yards of opportunity to force a punt.

Turning that perspective into a strategy requires that you force your opponent to slog along a few yards at a time, so that they rarely advance the ball into scoring range before you manage to force a punt or a turnover. And, wonder of wonders, getting off the field is nowhere to be found on Pete Carroll's list of defensive priorities. Bullet point #1 is "Eliminate giving up the big play". Bullet point #3 is "Get the ball".

Are the Seahawks actually playing like this? Is it working?

We'll begin by trying to measure what, for lack of a better term, I'll call get-off-the-fieldness. (Seriously, there is no better term. I like hyphens.) The total number of defensive plays per drive is meaningful, but the real crux of the matter is how many first downs you allow. So the index is weighted as follows:

And just to tighten things up:

"Adjusted 1st downs" adds all touchdowns allowed (by the defense) to the number of first downs allowed. Technically, allowing a touchdown brings the drive to a halt and gets you back the ball. But it's still a success in making the line-to-gain and will be predictive (and descriptive) of a team's ability to make or stop first downs.

"Adjusted plays" simply throws out the first play of the drive, because that one was guaranteed. Subsequent plays are likely, but can be denied if there is a turnover.

The Seahawks rank a below-average 20th in plays/drive. They're a respectable 9th in adjusted 1st downs/drive, but both numbers (and their OFI) are a far cry from the team's perceived defensive quality.

Next question, then: What have opposing offenses actually produced?

League-wide, defenses are giving up 16.635 yards for every point they allow. So to weight points and yards equally, we would add the total yards allowed and 16.635 x points allowed.

But we don't want exactly that. Ostensibly, we want to measure whether the Seahawks (as compared to other teams) are playing successful all-around defense by allowing small gains. We want to identify defenses which give their team the ball back with good field position. And most importantly, we don't want to over-measure red zone defense. There's already a "bendability" index floating around cyberspace for that.

So, arbitrarily, I've selected a ratio of 3:2 in favor of measuring yards. Which makes the base index:

Also, we want a number that we can directly compare to the OFI. Yardage is a bigger number than first downs. So, after a little math, it was determined that the indices differed by a factor of 5.27056. We simply redefine our value index, keeping yards and points in proportion thusly:

The Seahawks rank 5th in yards/drive and 3rd in adjusted points/drive.

Putting it Together: The "Slog Factor"

Note that the VIX is pretty unambiguous. It measures yards and points given up. Teams with a low VIX are playing good defense.

The OFI, on the other hand, is really just a hint. We can't be sure that giving up more plays and more first downs indicates poor defensive play, but we can expect a strong correlation.

So the "slog factor" (I'm assuming that inventing a statistic is like describing a new species, granting the discoverer/creator the privilege of naming it) is simply the VIX minus the OFI. Thanks to the normalized indices, an average slog factor should be around zero. Teams with a positive slog factor are allowing opposing offenses to gain more points and yards with fewer plays and first downs. Teams with a negative slog factor are making their opponents slog, producing fewer points and yards in relationship to the number of first downs gained and plays ran.

I suppose I could've just measured "yards per first down" or "points per play", but neither is quite as comprehensive. And it also wouldn't afford the same opportunity to compare where each team ranks in the league.

This is a fun stat. I mean, all stats are fun, but this is like that time when the square root of 2 and pi showed up to a party as part of the same complex number.

I say that because a high/low slog factor is not inherently good or bad. It's a measure of strategic emphasis, which has to be considered alongside other information.

For teams that rank poorly in both OFI and VIX, such as the Chargers, Jaguars, and Bears, there is probably a snowball effect. Forced to play a lot of snaps, these defenses get worn down and cannot stop their opponents from piling on the points. So it's no surprise that they have the highest slog factors, and the poor defensive performance shouldn't necessarily be blamed on over-aggressive play.

(Note that one could argue that the slog factor measures nothing more than the difference between quality of run defense and quality of pass defense. But I would call one wrong. The top 12 teams in offensive DVOA collectively run the ball 43.7% of the time, versus a league average of 42.2%. Ten of the top 11 in points per drive run the ball at least 39% of the time. The top 10 teams in pass percentage (ranging from 62%-68%) collectively have fewer points per drive and fewer yards per play than league average.
If your pass defense is significantly worse than your run defense, you're over-playing the run. And possibly the short pass.)

The Texans, Saints, Redskins and Lions are all giving up too many points and yards. Detroit has the league's 9th-best OFI (meaning they get off the field well) but the second-highest slog factor. They are clearly playing too aggressively.

The Ravens' slog factor is higher than average, suggesting that perhaps they are not exploiting their excellent OFI to full effect. But given that they have an excellent VIX, the strategy seems to be working. The numbers say that the defense is giving up some extra yards and points by playing aggressively, but they're keeping themselves fresh to stay effective throughout the game.

And what of Denver? The raw numbers say that their defense is putting way too much emphasis on getting off the field. On the other hand, the Broncos' opponents are probably playing aggressively themselves, often down by multiple touchdowns and heaving the ball deep.

The Eagles, Vikings and Raiders might benefit from playing more aggressively. Their low slog factor combined with a high VIX suggests that they may be giving up points because they can't get off the field.

Further up the list we find the Bengals, Panthers, Browns, Patriots and Jets among the lowest 8 in slog factor. These teams are clamping down on both yards and points, despite giving up first downs. It's possible that these teams could benefit from focusing more on the down marker, but each is in the top 11 VIX, so it's more likely that their strategy of stopping big plays is working.

For Seattle, the slog factor is nothing short of remarkable. The proof is in the pudding, namely, the league's 3rd-best VIX. More than any other defense, the Seahawks just aren't paying a lot of attention to that first down marker. They defend the whole field on every play, knowing that someone will make a drive-killing play on defense (or a mistake on offense) before much territory is surrendered.

(A note for the curious: If we plug in the numbers for Seattle's offense, they have 4.63 adjusted plays/drive, 1.99 adjusted 1st downs per drive, and an OFI of 9.633. Their adjusted points/drive is 1.93 and yards/drive is 31.08, equaling a VIX of 9.97 and a slog factor of 0.33. I don't have offensive figures for the whole league, but the positive slog factor indicates a good proportion of explosive plays for a team that runs the ball as frequently as Seattle.)

EDIT: Here's a scatter plot with OFI on the x-axis and VIX on the y-axis: 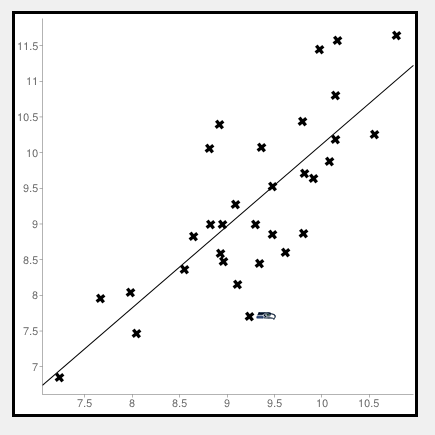