A few compelling thoughts about the Seahawks' season so far.

Ah the bye week. A glorious week in which I throw out the plastic container in the fridge containing all sorts of new and interesting fungi and bacteria. It's the week where I finally stop using paper towels instead of toilet paper. The week where I change out my razor blade after months of use.

I kid, obviously (or at least I hope it's obvious). But the bye week can really feel like hell. I mean, fans don't even get a sweet prediction post. What's up with that?

Well, to help get us all through the bye, I thought, "hey, I should write about some of the things I've been thinking of lately."

How ridiculous? Let me show you! To start, I'm going to back up a bit and talk about probability.

Let's imagine we have a coin toss to decide who receives the ball first in overtime. If you wanted the ball, and you were going to score, which side would you choose? If you were smart, you would choose tails, clearly. After all, tails never fails.

However, if you've taken probability courses, you would also know that if you don't choose head, you'll drop dead. Therefore, the Eigen-Probability-Matrix prescribes a 50/50 split between heads and tails.

Given that 50/50 split, what's the probability that you'll have a head in one flip? Well ½, or 50%, or 0.5. Whatever you want to call it, the probability is equal between the heads and tails.

Given those assumptions, we have four outcomes Heads (H)-Tails (T), HH, TT, or TH. To find probabilities, you simply take the number of occurrences of an outcome and divide by the number of outcomes. If you combine the first and last outcome from above, you end up with the following probabilities: 1/4 for no heads (or two tails), ½ for one head, and 1/4 for two heads. We had one outcomes in which we flipped heads twice and four outcomes total - 1/4 probability.

Why are coins relevant to the Seahawks? Because you can use these same principles to talk about how awesome the home field advantage is!

The next part of the formula - nCr - is a little bit trickier. It's a snappy little formula that computes how many times an outcome will occur. For example, if you use nCr, you could find the number of different ways you could achieve 3 heads in 10 flips - 120 different ways.

nCr assumes that each flip, or each trial is independent. Basically, that means that my heads can appear in any order, or the heads are interchangeable. Put another way, the first flip doesn't affect the second flip, nor does the second flip affect the third, and so on.

If we were to try and map this formula onto wins and losses, then we would have to assume that each Seahawk home game would not affect the others. Essentially, a loss against the Vikings wouldn't affect the game against the Saints.

That can be a difficult assumption for people to make, and I understand that. Games aren't played in vacuum. The players are mostly staying the same from week to week, injuries most certainly affect week-to-week performance, and I think that many would argue that games can feed into momentum - positive or negative.

I think I understand those arguments, and at one time or another, agreed with them. To start, yes, players generally stay the same from game to game. That might demonstrate some dependence and be useful for predicting outcomes. However, if we return to another gaming analogy, the players staying the same is like having 15 sides of a 20 sided die colored red and the remaining 5 colored blue.

Next, I think momentum from game to game is hard to define and even harder to measure. After all, the Colts defeated the Seahawks and 49ers in the span of three weeks, only to lose to the Chargers. Where did their momentum go? Shouldn't Kansas City have built up enough momentum to defeat the Broncos last Sunday?

Between stretches of home games, a sequence of poor competition, injuries, and other variables, momentum can be accounted for by a number alternative explanations. Does a team that wins four in a row, all at home, qualify as having momentum? What if that team has faced a number of different back-up quarter backs. Does the benefiting team deserve to be feared for their sudden competence? (That QB sequence describes the Giants' resurgence, by the way).

Simply put, I just don't think there's enough evidence to suggest that momentum exists between games. (That of course doesn't include momentum within games, which seems even more unlikely to me.)

Lastly, I'll admit that injuries most certainly are dependent from one game to the next. However, given the random nature of injuries, both in severity and identity, I think we can suspend this dependence for now. In all, I think assuming independence between games is a fair assumption.

Now finally, with that in mind, we can take a look at that crazy home record.

If we extend that formula to the entire season (8 games) we come up with these probabilities. 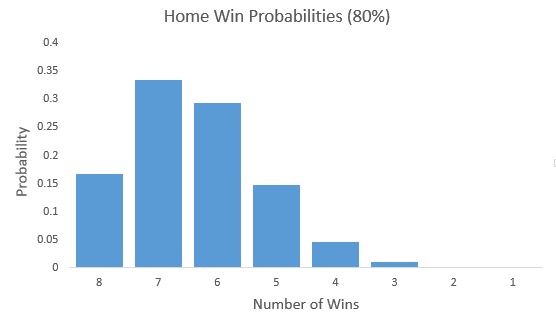 There remains an even more impressive number though. 0.943. Why is it impressive? Because that's the home game winning percentage of Seattle teams with 10 or more wins. Here's the table if you don't believe me:

Yeah, that home record is 50-3. In fact, it's so amazing that I don't blame media members who are skeptical of the Seahawks' road woes. Think about it this way - when a team wins 10 games and they're sort of automatically gifted 7-8 wins, how good is that team really? I still think people shouldn't discount the Seahawks on the road too much, but I can at least see where they're coming from.

Considering how effective the Seahawks are at home, is that 80% figure still accurate? Perhaps. It certainly looks more realistic than when I first thought it up. However, I think we can use that 0.94 as the new benchmark. (Yes, not every game has a 94% chance of victory, but again, this is just a base rate guess. An informed prediction that we likely can't do better than.)

Let's repeat that same process of tallying wins at home with our new benchmark: 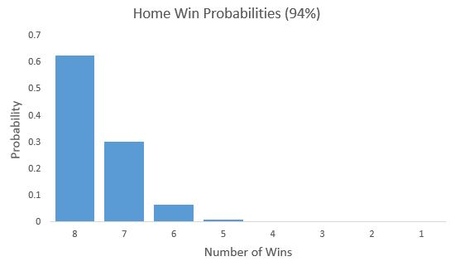 In this chart you should notice that 8 wins is now above 50% probability. Amazingly, the chances of winning 7 or 8 games is around 90%. Let me repeat that. If a Seahawks team is good enough to win 10 games, then they will have around a 90% chance to win 7 or more games at home. (!!!)

That percentage is borderline Alice in Wonderland absurd, and we get to root for the Hawks'. Celebrate life friends, because it's good to be a Hawks' fan.

Too Close to Call

Now for the not-so-cool part. The Seahawks are 5-1 this season in games decided by a touchdown or less. Historical precedence sets the winning percentage of close games at around 50%. John Clayton often speaks to this trend like this (or something close to), "The outcome of the game comes down to whichever team has the ball last."

I'm not huge fan of Clayton when he tries to analyze as opposed to report, but I think he's right on the money here. There are simply too many variables swirling around in any given football game for any trend beyond 50% to form.

While the Seahawks' winning percentage may have been over 50% when the beat teams like the Rams, the Bucs, and the Titans. It probably wasn't over 50% when they faced the Colts and Panthers. The Seahawks have benefited from some luck so far this season, but they may not be quite so lucky if they keep playing in close games.

Unfortunately for the Hawks', their next two games are against the 49ers and Saints. If those games are close, we may see the Hawks' record in close games inch closer to that 50% mark. Thing is, even if the Hawk's do regress towards the mean there, home field advantage is still probable because the Saints still have to play the Panthers twice. Further, I don't think the Hawks' will play more than a game or two that's decided by a touchdown or less. The Seahawks are firmly in control.

Pythagorean winning percentage is a neat little instrument. It was originally designed by Bill James to help measure a baseball team's success divorced from its win/loss record. Originally, it was (Runs Scored)2/ [ (Runs Scored)2 + (Runs Allowed)2 ]. It's an elegant formula and while it's been modified slightly (I believe the power is around 1.83 or some such), it has stood the test of time.

The advantage of the Pythagorean winning percentage is that it avoids the sloppiness of wins and losses. If a team scores plenty and their opposition doesn't, then they're generally a good team, regardless of the win/loss record. Wins and losses are still important. After all, no team ever made the playoffs because of their Pythagorean winning percentage, but they can help us gauge a team's true quality.

For your reading pleasure, I've noted all the Pythagorean win percentages of the division leaders thus far. I've also included a few teams I found interesting - Carolina and Kansas City. The list is sorted by highest Pythagorean winning percentage.

*Note: In football the power is adjusted to 2.37 as opposed to 2, but everything else remains the same. Philadelphia, Cincinnati, and Seattle are on bye this week, so they'll have played one more game.

This list aligns with perception pretty well this year. There are no major standouts in terms of discrepancies and I'm not hiding any teams with a large point differential. Not surprisingly, Seattle ranks second by Pythagorean win percentage.

That's all of my musings for today, folks. I hope your bye week treats you well. If I may offer a suggestion to any worried fans out there - don't. This team is very good, and they're still improving. All kinds of measures show that the Hawks' are among the best teams in the NFL and the best argument against the Hawks' is the record in close games. Lastly, if Seattle isn't represented in the Superb Owl, we shouldn't feel too bad. In my opinion, the top six teams or so all have a viable shot at the title. So sit back, watch the game, and enjoy. This is one hell of a team.