The pundits are cringing at the likelihood the Seahawks winning the top seed in the NFC. Desperately looking for any rationale to dismiss Seattle's chances (or build optimism for their own team), some claim that lower seeds have a Championship advantage. Do they?

Share All sharing options for: Playoff Seeds and Championships

A good record and a bye are bad, according to The Lepo Report:

So if your favourite team is having an incredible season, don't get too excited... You should, in actuality, be praying that they don't finish with the best record in the league.
Oh... And if your favourite team is not quite meeting their potential, don't fret. They may be fortunate enough to sneak in to the play-offs, and be forced to win three straight road games, before playing a division-winning team in the Super Bowl.

So fight the urge to focus on the upper crust of the league and keep an eye on that fascinating six-deep clot of 5-6 teams that currently pass as fringe playoff contenders in the AFC. That's because the final five weeks of the NFL season are all about building mojo, and somebody's going to come out of that sloppy bunch with a healthy head of momentum and new life in January.

An extra playoff game is vital to build momentum, per BBTSD_Sports:

I want the Patriots to earn the #3 seed in this year’s playoffs. Brady and the rest of the Pats have been unable to build momentum in recent postseasons, and it’s all about timing in the NFL.
Around the league, the bye week has not proven to be that valuable. The Super Bowl champion has not had a first round bye since the ’09 New Orleans Saints.

Especially to win the Super Bowl, according to RrustyDawg of Arrowhead Pride

Home field advantage throughout the playoffs is highly over-valued by fans and commentators if the goal is actually winning the Super Bowl.
An opening round bye weekend slightly helps getting you into the Super Bowl but definitely puts you at a disadvantage if facing a team that played a game on wildcard weekend.

Wow. It would appear that the top seeds in each conference should abandon all hope, throw in their backups for the playoffs, and hope to lose quickly for a slightly better draft position and a chance to earn the coveted six seed next year.

Eh, no. Let's address this nonsense one thing at a time:

is a complete and fallacious myth. Winning a previous game does not, in itself, improve a team's ability to win the next game. Team's do, however, change in quality throughout the course of the season and going into the playoffs. Scheme changes, player development, and injuries (or the lack thereof compared to one's opponents) make the NFL more volatile than, say, the NBA or Major League Baseball.

So when a team improves its quality around the start of playoff time, they can indeed win several straight games and even a Championship. But playing in the first round doesn't enhance the improvement, it only gives them an extra opportunity to display the improvement-- along with an extra opportunity to lose a game and/or suffer injuries. It's better for a team which is peaking to have a first round bye: Their chance of winning the Super Bowl increases; their chance of being described as "building momentum" via an external narrative decreases. Which is more important?

Top seeds in the Super Bowl,

as described by Rrusty Dawg, seem to have a disadvantage. His is the most honest and accurate evaluation from the above quotes. But the perspective is seriously flawed. Based on a very limited (and therefore inconclusive) sample size, it may indeed be true that a top seed should be the underdog when playing the Super Bowl against a Wild Card team.

In that case, if you are some alternate universe fan who doesn't care about individual teams but only cheers for a certain conference to win the Super Bowl, then, yes, you would root for a lower seed to represent your conference. That's because a lower seed who does win the Conference Championship is more likely to do so by virtue of being a better team (in the post-season) operating without the benefit of home field or a bye week. But if you are a fan of a team, then you'd best hope for a higher seed.

What we have here, folks, is not a strategic consideration, but an epistemology problem. The best team doesn't always win, and home field advantage can make the difference if its close. So each conference bracket looks something like this: 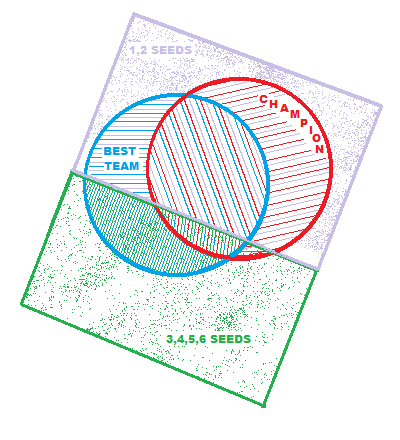 The big arc of red-and-purple in the upper right quadrant shows the case where a top seed wins through to the Super Bowl without being the best team, thanks in part to their bye and home field. The red-and-green sliver below-- the tiniest region on the map-- shows the most unlikely occurrence where a low-seed takes the Conference Championship without being the best team.

* Given that the playoffs do feature a bye week and home field advantage, then any particular low seed which has already won the Conference Championship is a better bet to win the Super Bowl (more likely to be the best team) than a top seed.

Getting there and winning it

is best accomplished by having an excellent regular season and a first-round bye. While six of the last eleven Super Bowl champions did not have a bye, keep in mind that there are twice as many non-bye teams. Since realignment, 5/44 teams with a first-round bye (11%) have won the Super Bowl, and 6/88 teams without a bye (7%) have won it.

Expanding the sample size to 20 years produces logical and expected trends. Once a team makes it to the Super Bowl, they are more likely to win if they did not have a bye because they are more likely to be playing very, very well (as opposed to winning with homefield advantage). But at the start of the playoffs, a 1 or 2 seed is five times as likely to make it to the Super Bowl and three times as likely to win.