Seahawks' 3rd down conversions in the Russell Wilson era

Share All sharing options for: Seahawks' 3rd down conversions in the Russell Wilson era

Some 3rd Down Thoughts:

- Seattle needed every one of their eight (8-for-12, 67%) third down conversions when coming back from the dead to beat Tampa last weekend. When you turn the ball over three times, fail to earn a takeaway, and give up 200 yards rushing - you're going to have to really excel in another key area. This week, their 3rd down work, which was their best of the season, helped pull out the win.

- In 2012, Russell Wilson and the Seahawks (see chart) steadily improved on third down if you break up the season into "4 game quarters" - in pretty amazing fashion: 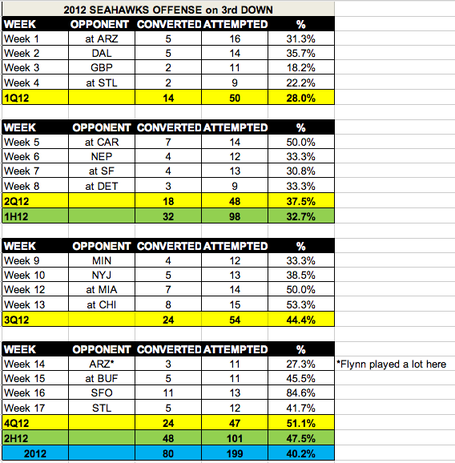 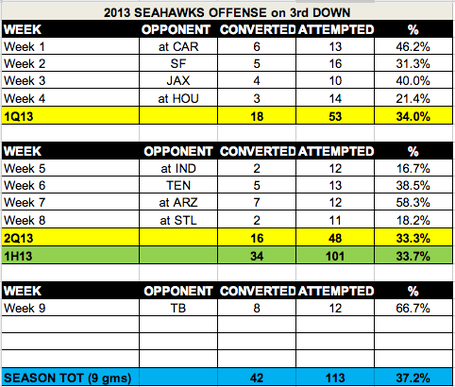 - The Seahawks face a remarkably similar number of 3rd downs per game (about 12 to 13 per game), look at these breakdowns in four game clumps

....and against Tampa they faced 12 third downs.

- One game can really bring your average up, so I wanted to break down the Seahawks' third down performance over the last 25 regular season games (the Russell Wilson era) into five buckets

- The Seahawks have one "Not Good" performance (SF), and they have three of the devastating "Very Bad" variety - at HOU, at IND and at STL.

- Interestingly, four of the five "Very Bad" third down performances happened on the road in the Russell Wilson era: At HOU, at IND, at STL 2013, at STL 2012, with the only home performance of that variety was the 2/11 performance on Monday Night vs the Packers.

- Also, interestingly, four of the six "Very Good" third down performances of the Russell Wilson era (over 50% conversion) happened on the road (at AZ 2013, at MIA, at CHI, at CAR 2012). The two amazing home performances was SF 2012 and the Tampa game on Sunday.

Could Seattle be poised for a similar uptick on third down in 2013, as witnessed in 2012? With offensive line help and a favorable home schedule, let's hope so! The Tampa Bay game was a good start to the 2nd half of the year on third downs.

I will post my thoughts on a few third down plays later in the week with Danny....