The Seahawks' roster by NFL Draft round

Seattle has 14 players on their roster that were chosen in the first three rounds of the NFL Draft. By comparison, last season's NFC Champion San Francisco 49ers roster had 14 players from the first round alone.

Share All sharing options for: The Seahawks' roster by NFL Draft round

In putting it together, I have found that I am still amazed that the Seahawks only have 14 players on the roster right now that were drafted in the first three rounds. That number will obviously change after the draft and free agency, but is still shockingly low to me. For comparison, as said above, last season's San Francisco 49ers roster had 14 first round players - Vernon Davis, Michael Crabtree, Alex Smith, Justin Smith, Aldon Smith, Donte Whitner, Carlos Rogers, Patrick Willis, Ted Ginn, Randy Moss, Mike Iupati, Joe Staley, A.J. Jenkins, Anthony Davis, - am I forgetting anyone? Amazing.

The orange boxes indicate that a player first originated with another NFL team, even if it was only a practice squad appearance. The players without a surrounding box are 'internal' guys - Pete and John's guys.

This chart is also a reminder of how young the team is, and how Pete and John added to the roster, especially from the class of 2007, via trades and free agency (namely Zach Miller, Marshawn Lynch and Sidney Rice).

It is also interesting that Pete and John may have had a hard time convincing undrafted rookies to come to Seattle in 2010, as they never kept a player from that era, and ended up signing guys that were cut from other teams. They began to have better luck luring undrafted rookies in 2011 and 2012 it appears. 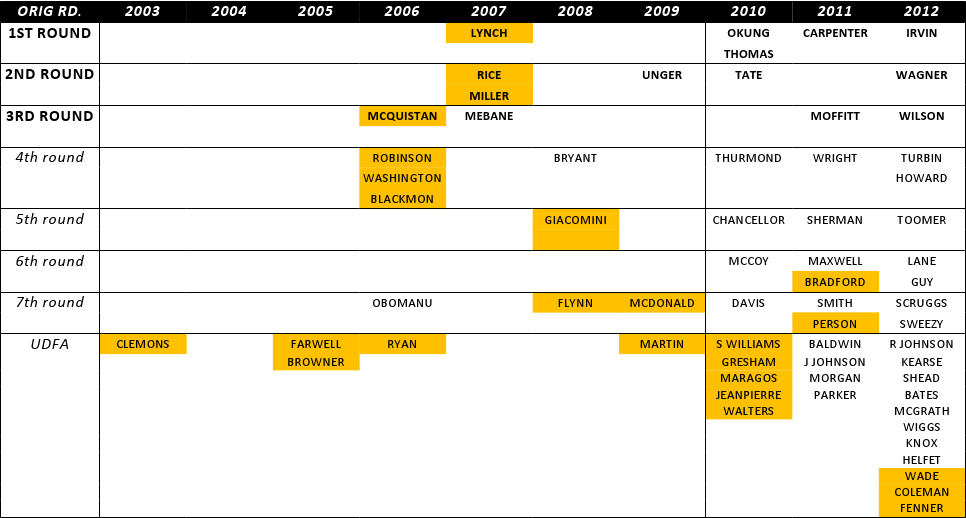