The Seahawks signed Percy Harvin to big money and aren't likely done in free agency. Where does that leave them in terms of the salary cap?

-- DK note: Davis sent me this article just before the news that Cliff Avril was signed. Below, you'll see that he predicts a 'John Abraham' style of signing for defensive end. Obviously, Avril is a younger version of that but essentially in the same range - 2 years $15M - that Abraham is likely looking for (but probably won't get). Regardless -- Davis was all over it, I was just too slow to post this piece, so with my apologies, here's where Seattle stands with regards to their salary cap and balance between offense and defense.

There are some really good articles recently posted by Danny O'Neil, Jerry Brewer, and Kenneth Arthur over the last few days about how heavily the Seahawks are now spending on the offensive side of the ball, post-Percy Harvin. Kenneth used OverTheCap.com and they have estimated Seattle's spending on that side of the ball at north of $80M, which is basically two-times the amount committed to defense (this before the Seahawks now begin to sign free agents like Cliff Avril and hand out extensions to players like Kam Chancellor, for instance).

In plain terms, I think their final spend on the offensive side of the ball, including dead money after cuts, will be about $70-75M.

Attached is a spreadsheet (<----download, or view below) with my estimates of what the offensive side of the Seahawks' roster may look like once the season opens. 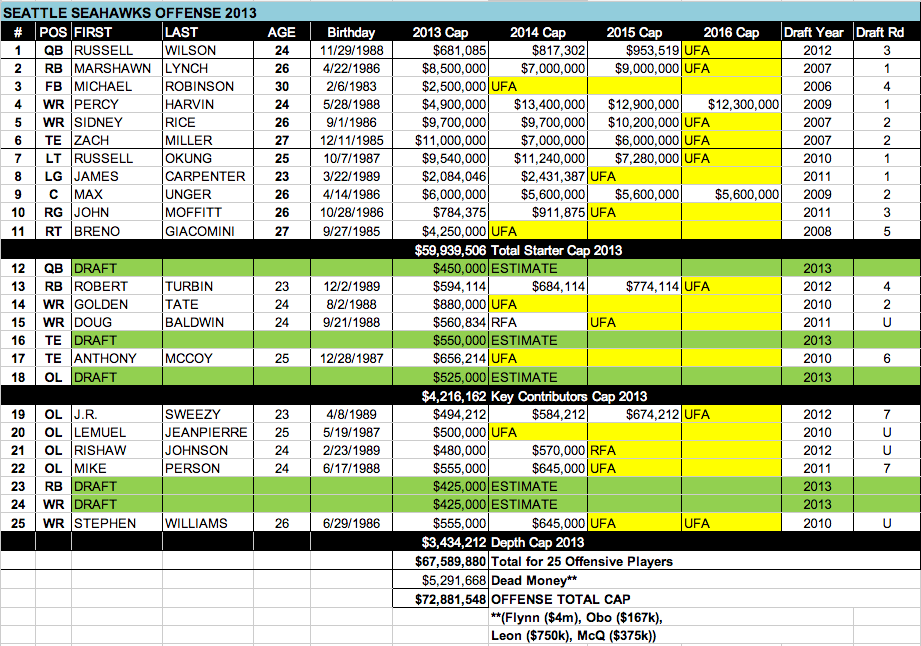 I had believed Leon Washington would become a cap casualty for quite some time now, and indeed he was ($2.125M net cap savings with a $750k dead money charge).

I also believe Ben Obomanu will be a cap casualty with a $2.3M net cap savings and a $167k dead money charge.

Some fans will get touchy with me thinking Matt Flynn gets traded or cut. No worries - for this exercise, just print the spreadsheet I've put together and add him back in at a figure of $7.25M (and deduct the $4.0M in dead money I included) for a net add of about $2.75M ($3.25M net add less the $500k cap hit for a rookie backup).

Same goes for Paul McQuistan. If you believe that there is no way he gets cut, just add about $2.5M to the cap and you can keep him ($3.375M cap hit less $375k dead money charge less the $500k you would pay to his rookie replacement).

As for the rest of the Seahawks' $130M cap: I believe the Seahawks will commit to somewhere in the low $50M range (say $52M) to the defensive side of the ball this year.

They are currently at only $40M right now. With the way the free agent market is going - I predict a "John Abraham" type defensive end, (DK Note: Cliff Avril, y'all) a Defensive Tackle, and perhaps a nickel corner will be signed (modest money) in free agency. Once these chips have fallen, I will do a similar post to this which breaks down the salaries and cap hits on defense.

I would usually not predict Carroll spending money on a corner - but I think the cornerback free agent market is getting pushed down a bit right now, and I could see a nickel corner type play. The next thing I see after that is done, and this was plainly stated by John Schneider on national radio (March 13th, 2013), that he was going to start trying to extend players.

Since Schneider can't extend Richard Sherman this year due to the new CBA, I believe he will begin by going after his safeties, Kam Chancellor and Earl Thomas. We'll see what happens. Kam should get $4M-6M per year as strong safety and I believe Earl will get $9M+ per year as a free safety. I had previously thought they would extend Golden Tate this summer, but after the Harvin signing I am not so sure.

If they do extend Golden, then I think it may be a sign that other offensive weapons may be cut (not necessarily in 2013) but maybe 2014.