Seahawks offensive salary cap through 2015: Stop worrying about keeping the band together

I see fans worrying about 2015 because of the recent amazing acquisitions of Percy Harvin, Cliff Avril and Michael Bennett. Stop worrying.

Share All sharing options for: Seahawks offensive salary cap through 2015: Stop worrying about keeping the band together

When John Idzik left for the New York Jets, the first thing John Schneider did with newly hired Cap Specialist Matt Thomas was hammer out a 3-year plan (2013-2015).

This '3-Year Plan' allowed them flexibility to take advantage of possible deals that may appear - i.e., Harvin, Avril, and Bennett - as well as lock up the best players on the Seahawks roster that are 24 years old or younger - namely Russell Wilson, Russell Okung, Earl Thomas, & Richard Sherman. There are many other good young Seahawks, but in my opinion, those are the top-4 that should take priority. Players like Lynch, Harvin and Unger are already locked up long-term.

Right now, the Seahawks have a rather bloated offensive cap. My calculations have their highest-paid 25 offensive players hovering around $79M, and this is after cutting Ben Obomanu and Leon Washington. I have the defense currently around $49M, and this is after the signing of Cliff Avril and Michael Bennett. For the charts included here, I gave Avril a $5M cap charge for 2013 and a $10M cap charge for 2014, though this morning, we found out that Avril only counts $3.75M against the cap in 2013 and $9.25M in 2014 per B-Mac & Sando. So, I actually overestimated a bit. Which is nice.

Right now the Seahawks are spending 62% on offense and only 38% on defense if you remove the specialists from this analysis. All this with a starting QB that makes less than $1M per year. How is this possible? This is possible because the entire "Back 16" of the Defense - every Seahawk defender not playing on the defensive line, costs only $13M as a group!

$13M for 16 players, this includes all your starters and all your depth. Unbelievable. I am counting Cliff Avril as DL for this analysis. That means the defensive line costs $36M, or almost 3x the amount of the entire "Back 16".

Defensive line is expensive. That is just a fact of life on every team. But if the Seahawks want to keep Sherman, Earl and Bobby Wagner long term, and do their best to also find a way for Kam Chancellor and KJ Wright, if possible, the offense is going to have to move closer to the 50% of the cap mark. Also, the defensive line will have become a bit cheaper as 2015 approaches.

Could offense be more important than defense in the NFL and warrant higher spending? Quite possibly. Should Seattle spend more on offense than defense? Quite possibly. Could Seattle stay in a perpetual state of spending money on the offense while "drafting then discarding" on defense? It is possible, but I really think Pete Carroll wants to keep his defensive "band" together over the long-term and reward organic Seahawks. If you have a fundamental problem with trending toward balance, I understand that - but just follow with me on this article and analysis, because I think there are things to be gleaned here. You can obviously form your own conclusions on where the Seahawks are trending in the next 3 years in terms of balance or lack thereof.

Today, the Seahawks have about $79M committed to its 25 most expensive offensive players. I believe that by the time the season kicks off in September 2013, the 25 Seahawks on offense will cost closer to $73.5M. I believe the defense will then cost about $53.5M, the total Cap Spend will be $130M when you factor in specialists. Because the Seahawks Adjusted Cap is $136M, due to the benefit of rollover, they should be able to roll $6M into 2014. This should allow the Seahawks to spend $131M in 2014 while many teams in the league will capped around $125M (my estimate for the NFL cap in 2014). 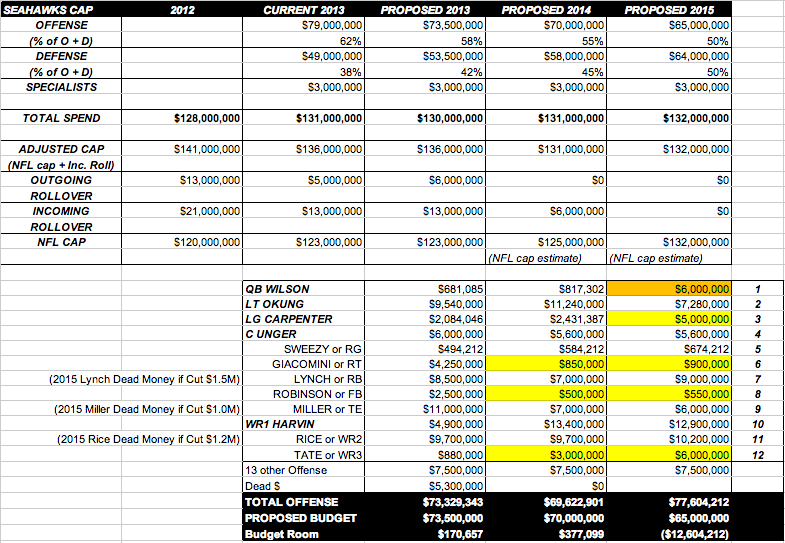 If you look at the chart:

I think the two "low hanging fruit" to cut would be Paul McQuistan and Matt Flynn (hopefully a trade). If you could trade Flynn and cut McQuistan, that would cut your cap down to $73.5M on offense and that $73.5M figure would include the dead money charge for Flynn, McQuistan, Obomanu and Washington.

It is not ideal to trade Flynn or cut McQuistan, as both players have value. If you were to find a solid backup in the draft (the next Kirk Cousins if you will) and a solid Swing Tackle/Guard - you may be able to pull it off unscathed.

(The other possibility, and this would have a similar cap-effect when analyzed over a two-year period, would be to cut Sidney Rice in 2014. You would save a little over $7M in that scenario. Personally, I would prefer 2 years of Sidney Rice (2013 and 2014) than 1 year of Flynn and McQuistan if I had the choice. Obviously, many fans would not agree and that is totally understandable. One other possibility is drafting a FB/H-back type in Round 7 in 2013 and that could save $2M and you may be able to keep Flynn around one more year).

The starting 11 on offense (see above chart) should cost around $59M in 2013. Michael Robinson and Breno Giacomini are UFA in 2014. It would be ideal if the Seahawks were able to find a replacement for Robinson and Giacomini in either the 2013 or 2014 Draft. If they were able to nail a Right Tackle and Fullback, they could keep the starting 11 in the $59M range for 2014.

Amazingly, you could even re-sign or extend Golden Tate. I was in favor of extending him before the Harvin trade. Now that Harvin is here, I think it would be more prudent to see how this year plays out in terms of Wilson, Harvin, Sidney Rice, Tate and Doug Baldwin. Throw in Zach Miller and a possible drafted TE and see who has chemistry and who is disappearing. If Tate is still shining, and the Seahawks want to re-sign him in 2014, they could do so in theory without cutting anyone. Where would you get the money to pay him? One way to look at it would be - Tate would essentially be taking "Flynn's money". Whether traded or kept - Flynn will incur a $7.25M to $4.0M cap charge. Since year-1 of any Free Agent deal usually has a low cap number, the "Flynn money" should be plenty to pay for Tate.

2015 will mark a transition in this Seahawks team. At this point, you are going to want to give Russell Wilson an extension. Even if he makes over $10M per year, his "Year-1" cap hit could easily be $6M (Percy Harvin is only $4.9M in 2013 on an $11M+ per year average). Wilson's 2015 charge is highlighted in orange above. At that point, you may also want to re-sign James Carpenter or another LG - I estimated $5M for that (should be plenty in Year-1 of a deal). Okung may have been extended by then, but either way, I can see his cap charge be close to the $7.3M he is scheduled to earn in 2015.

Because the of the looming Richard Sherman contract, I believe the Seattle offense has to be closer to $65M in 2015, with the defense close to $64M. I "hope" the television money has kicked into the NFL system, and am estimating a $132M league wide salary cap in 2015 (obviously, there's a small amount of educated guesswork that goes into these models, but I've been very thorough in my research).

If you look at the chart, as you can see, the Seahawks are now $12.6M over their "offensive budget" for 2015. What this tells me is that something will have to give from Zach Miller, Marshawn Lynch or Sidney Rice by 2015. They could all be long gone by then, but any way you slice it - I believe at least two of those three will either be gone or not playing on their existing agreed upon contract for 2015. Cap charges for dead money for all three are modest in 2015.

I tried very hard to take into account many factors for this analysis. I tried to pay attention to the growth of the cap, the effect of rollover, the ideal amount of rollover, the increasing cap demands of the defense, and the tough decisions that will have to be made in 2013, 2014 and 2015 to keep the band together on offense.

I think the future looks very promising in 2014. I do think the Seahawks can nail an OT and a FB sometime in the 2013 and 2014 Drafts. 2015 will bring its own challenges. By 2015 the Seahawks will have to raise up an existing player, or draft a RB, TE and outside WR suitable to start on a high caliber team.

The good thing is that the Seahawks have three drafts to acquire the next batch of weapons for Russell Wilson (2013-2015). I think they can do it.

Lastly, the Seahawks are spending $48M-$49M on defense at the time of writing, and I believe they will be at $53.5M when the 2013 season kicks off. What happens in the meantime? I think a couple of extensions are coming, to one, or possibly both safeties.

Earl is currently at $3.5M and Kam at $1.4M. If you gave them big signing bonuses you could extend both and have modest cap figures for 2013. If you are really got aggressive, you may be able to pull them both off AND sign Alan Branch to an affordable deal. How nasty would that be? Find out how nasty the Seahawks defense could be through 2014 in my next post.

Till then, you know where to find me.