As Free Agency begins, Seahawks have 5th most cap room in the NFC at $17.1M

Share All sharing options for: As Free Agency begins, Seahawks have 5th most cap room in the NFC at $17.1M

The following chart is a quick snippet taken from OverTheCap.com, which is a really great resource for NFL fans. It has sortable tables showing the Seahawks' (and every team's) player salaries, broken down with bonuses, potential dead money, cap savings for cutting that player, etc. It's super informative, and though it's a constant work in progress to keep salary cap numbers updated, it's the most in-depth resource I've found. Now, as you can see, the Seahawks come in 13th in the NFL in total cap space. However, the majority of the teams with the most cap space (and often-times big holes in roster) are in the AFC. 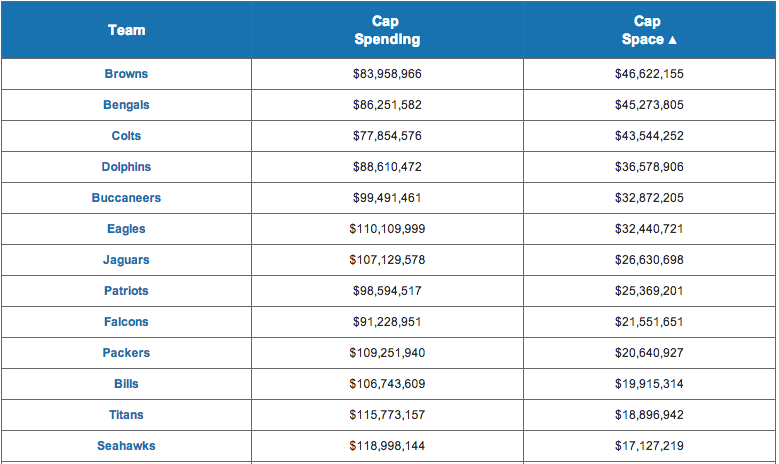 Eight of the twelve teams that have more cap space than the Seahawks are in the AFC.

On average, it is my opinion that the NFC has better teams and better players as a whole. With a possible influx of NFC talent into the AFC this offseason in free agency and via trades, that may change over time. A big part of this is the cap space available to those teams. The salary cap exists to create parity.

The four teams that have more cap space than the Seahawks in the NFC are the Buccaneers, Eagles, Falcons and Packers. When you consider the fact that Green Bay, Philadelphia, and the Seahawks had the three fewest number of outgoing unrestricted free agents in the NFL, it shows that Seattle is in a very strong position this offseason in terms of both 'coming and going'.

Notice that seven of the twelve teams with big cap space did not have winning records (and include the Browns, Eagles, Jaguars, Bills, and Titans) .

On the NFC side, I would not be surprised to see the Eagles and Buccaneers being extremely active in free agency.

Go over and check out OverTheCap. Check me out on Twitter.