An analysis of NFL injury reports suggesting that there is no durability skill for Percy Harvin to lack.

Share All sharing options for: Percy Harvin will live forever, or die trying

In my heady youth I broke my wrist on a toilet. I was trying to break into my house and, you know what, it's not really all that important why I was doing it. The point is that, as I was falling, time seemed to slow down. I thought to myself, very clearly, "now who will feed the dog?" It seemed perfectly natural to worry about that at the moment. And afterwards bemusement at having had such an inane thought distracted a little from the pain.

I like to imagine that NFL players have similarly ridiculous thoughts when they notice a particularly hard tackle coming.

Of course, there was that time I was hit/ran into a car while biking. I had no sense that it was happening. My first memory is the asphalt.

I imagine most NFL injuries are of the run into by a car type.

But even if the players can't see their injuries coming there is a large set of fans who are convinced they can. And since the Percy Harvin trade I've been seeing a vocal few convinced that Harvin is going to suffer an injury mired career that will only manage to leave fans wishing after what could have been.

They're wrong. Or rather, they don't know what they're talking about.

To be clear, some players have injury-plagued careers. Many players are forced to retire due to injuries. If a player is injured it is reasonable to worry that the injury may jeopardize the player's future performance. Some injuries are lingering. Some have incurable causes. But there is not some intangible fragility skill. There are not some players who are predisposed to suffering a string of unrelated injuries. There are players who have been unlucky, but luck, or it's absence, is never sustainable. 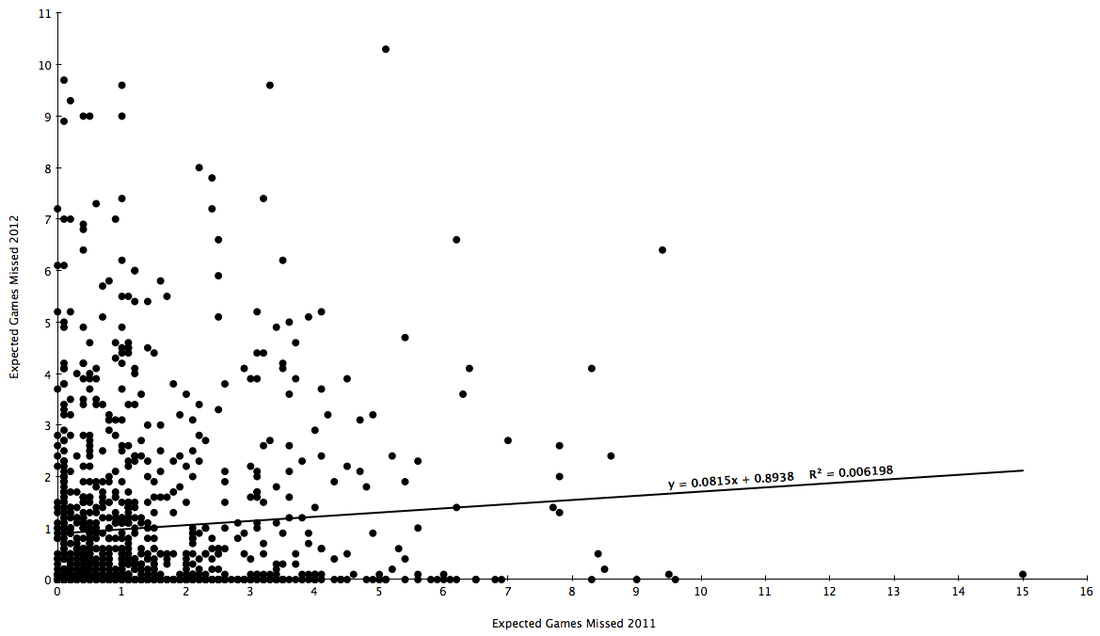 Of course now you'll be grousing that sprained thumbs aren't like the knee and shoulder problems that seem to follow injury prone players around. So here's the same graph but with a cutoff of 2 expected games missed in 2011. I'm not even going to bother labeling the axes, this graph bores me so much. You could have just used a piece of paper. Or tape. 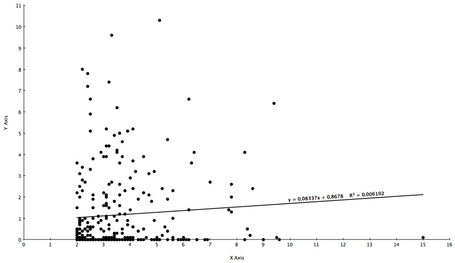 Here's a fun game! Can you find Peyton Manning?

Okay, so that still shows no correlation, but what if there is a small and identifiable group of people for whom injuries are more likely than others? They might get hidden in the full population. This one is actually a little easier to answer with some out and out math. So, if you want sweet conclusions without the bitter math feel free to skip ahead.

I've included the process used so that it can be examined. No black boxes here.

Note that in the following all uses of injury mean a listing on an injury report with a declared injury. Also, yes, I made some simplifying assumptions.

Here are the relevant probabilities and populations (1696=32*53, the number of players capable of landing on an injury report any given week):

Again, however, that's not quite okay since I have no right whatsoever to assume that retirement is independent of injury (it makes intuitive sense that they're related). So let's assume that every single retiree in 2011 was injured. That means that we arrive at .779*.747*1160 for an expected value of >675.

What was the actual value?

That means that, assuming all retired players were on the injury list last year, the probability of being injured in 2012 given being injured in 2011 was .789. That's a whooping 4% greater chance of being injured than in the full population and about 9% greater than non injured players! The difference is significant at the 95% level so we can just stop there and say "well, we can't reject the common wisdom that there are injury prone players."

But I'm nothing if not studious so let's not stop. Let's apply the same math to being injured in 2010. Obviously retirement is squared. Funnily it works out at a 10% greater chance than population and 23% greater than those not injured in 2010. Rather than assuming there is some sort of weird removed effect, note that if the retirement probability is assumed to be higher than it actually is then we'd expect the re-injury probability to go up the farther back the initial data goes. This is because the projected remaining pool of players is progressively smaller than actual - artificially increasing the injury rate.

I don't believe that a player who was on the 2010 injury report being 23% more likely to be injured in 2012 than a player who wasn't versus 10% for 2011 can be real. I don't think aging can explain that. I think a too high retirement rate does.

So, let's try to nail down the retirement rate by assuming that the odds of getting injured in 2012 are affected by 2010 at a level at least not greater than 2011.

In fact what we get is an expected value of >743 versus and actual of 713. A significant difference at the 95% confidence level.

I propose that some of the difference is accounted for by an increased likelihood of staying in the league after making the injury report two years in a row. Unfortunately I don't have numbers to support my intuition. But it seems reasonable to expect that many more players drop out of the league after appearing in a single season than after two. If that's the case then we'd run into the same problem experienced earlier with the single season numbers.

Second, I'd expect to start seeing a higher proportion of players with known recurring injuries such as migraines or being on the Patriots in a multiple year sample.

Considering those two together a difference of 24 players and .05 jump in probability of injury seems easily explainable without resorting to belief in a durability skill.

Here is a table of expected numbers of players on 2011 and 2012 injury reports given appearance on past reports and the actual numbers. Where actual is lower than expected (or equal) it lends credence to injuries being basically random. Where actual is higher, it doesn't.

If a set of players predisposed to injury played in the NFL, whether because they're small, wear their weight wrong, or run the wrong way I would have expected them to show up at a higher rate in injury reports between years. They don't.

A small jump in rate of listing after two years with appearances on the injury list is, in my opinion, better explained by changes in retirement rates after two season in the league versus league average than it is by a durability skill. Any remaining difference is likely explained by chronic injuries like migraines or being on the Patriots.

If a durability skill exists in the population at large then NFL players have already been selected for possessing it. In the 8+ years of football many NFL players have played before turning pro the injury prone ones - if there are any - will have been weeded out.

Percy Harvin had an injury plagued college career but it wasn't bad luck, it was a chronic ankle problem which was fixed, presumably effectively. As far as I know the right ankle bone (college) is not connected to the left ankle bone (last year). Percy Harvin has had migraines but those haven't increased his expected games missed to above average (three in three years - less than the NFL average).

There is no reason to believe that Percy Harvin is more likely to spend time on the injury list than an average player in the NFL. If GMs believed there was, that's great, it meant he was undervalued.

We're odds on to get this for more than 14 games next year.