Marshawn Lynch is a hot geyser of reliability

An analysis of what makes a back reliable and whether there is a reliable way to measure it.

Share All sharing options for: Marshawn Lynch is a hot geyser of reliability

Do you guys know how geysers work?

It's pretty amazing. I'm not a geyserologist so I assume that one will pop up in the comments and tell me how wrong I am and I defer to her knowledge in advance. That being said let me tell you what I think I know.

Underground there is a large body of superheated water in porous rocks and fissures. Mostly it is capped off from the surface by an impermeable layer of rock. Except there's a crack, with narrow tubes leading up to the surface. The hot pressurized water below rises up through the tubes and cools. The column of cooled water's weight forms a lid on top of the very hot water below. Eventually water somewhere in the column reaches the boiling point at its pressure and steam bubbles up through the column. The bubbles cause some of the cold water cap to spill out and the water begins to rise - as the pressure drops the superheated water flash boils and shoots out of the tube as super hot water and steam.

In many geysers the process occurs so similarly for each eruption that you can predict the 20 minute interval in which the geyser will explode with impressive accuracy.

In Yellowstone the largest geyser is Steamboat but, by far and away, the most popular is Old Faithful. It's probably the most popular because, while not being small in it's own right, it has very frequent and reliable eruptions.

I firmly believe that there is value in reliability. I ate bran muffins for breakfast!

I believe that Marshawn Lynch has what I have when I eat my bran muffins. And that belief is absolutely one hundred percent emotional. I'm not a good scout so even though I can tell you that I see Lynch fighting through bodies to turn small losses into gains it really doesn't mean anything when I do. In fact, why should there be such a thing as a reliable running back in the NFL? What do we even mean when we say that a back is reliable?

A reliable back is one who gets stopped short of a successful run relatively less than others. But it's not just that. Obviously Adrian Peterson gets stopped short of success less than Justin Forsett but that's because Peterson is better than Forsett at, um, everything. In an absolute sense AD is more reliable than Forsett. But that's not interesting. In that context saying a back is reliable is just saying he's good. We know that the skill level of backs vary. But is reliability a skill?

In other words, holding YPC as equal, a reliable back is one who manages to have less bad runs.

Are there such backs? Let's try and get an answer!

This is Marshawn Lynch: 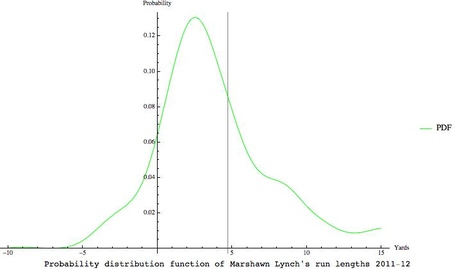 The eagle eyed reader will notice that given such a curve one could create an equation describing the probability that a running back is still chugging along after a certain number of yards. Here is a plot of those survival functions for the four running backs with the greatest number of attempts over the past two years: 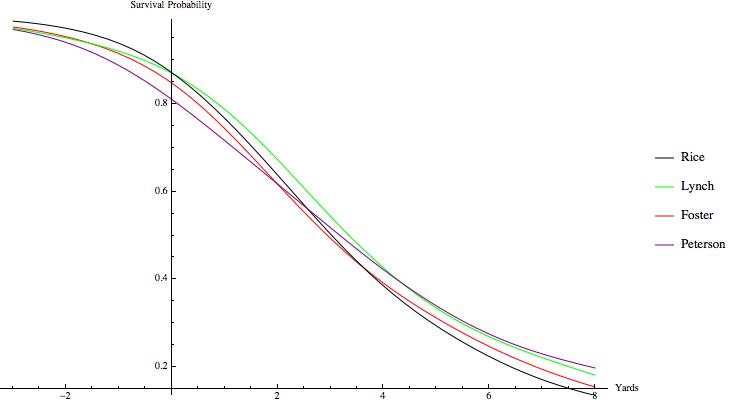 Looking at this data we can say that, relative to the others, Rice has been best at not getting stopped for a loss, Peterson gets his value from the big play more than the small gain, and that Lynch is best back at getting to 4 yards past the LOS. That 4 yard marker is around the average distance to success (as determined using the Football Outsiders method) and is therefore what I'm using as the yardstick for reliability. 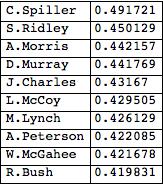 Have these guys been the most reliable backs? Sure. This is definitely enough to refute the occasional "CJ Spiller is too boom-bust to be truly great" guy you'll meet. In fact, Spiller leads the league in survival at 1, 2, and 3 yards past the line of scrimmage as well (Lynch is second in 1 and 2 yards and fifth at 3 - if you just do 2012 Lynch is second in all 4 categories).

But we wanted to look at relative reliability. Looking at the list above you can already get the sense that reliability is probably a skill partially independent of YPC. Willis McGahee and Stevan Ridley haven't exactly torn up leader boards in other rushing categories. We'd expect YPC and reliability to be correlated since there is no way for them to be totally independent - high reliability backs will have naturally higher YPCs. In fact the correlation is .89 for the top 100 backs in attempts in 2011-12. Here's the chart: 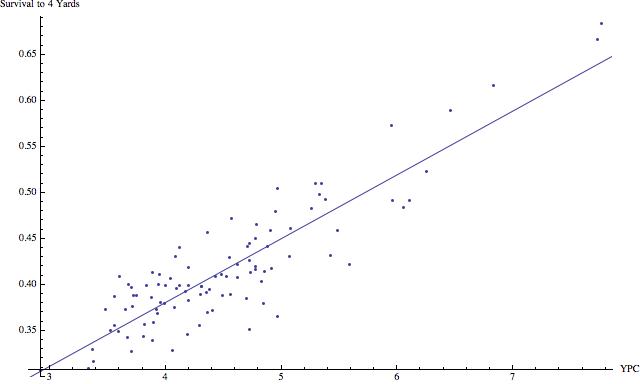 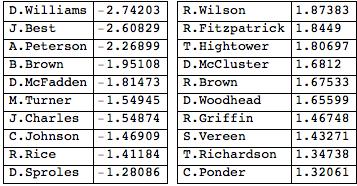 Nothing to see there!

Actually I should mention that so far I've been excluding QBs where they might make any impact on the numbers because obviously many of their rushes are very different. If anything, this supports that thesis (Ponder? Reliable at anything?) but I just can't pass an opportunity to put Wilson on top of a leader-board.

So now I (or rather my computer - I actually do very little of the math you see in these. Soon we'll all just be glorified programmers) run some equations like I did in this post to see if relative reliability can stabilize away from YPC projected reliability (the regression line you saw above).

Here is what the splits looks like at a sample of 35 attempts each (sampling 100 backs) for a correlation of .11 (I actually averaged correlation across 500 iterations [25 minutes it took!], this is just a representative sample): 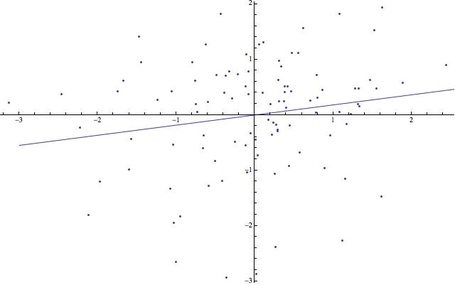 You can immediately tell there is no finding a skill at such a low attempt number. But I can keep on chugging!

If anyone is genuinely curious about the exact value of r=.5 I can run the 2010 and 2009 data through the wringer as well, but I'm satisfied enough that it is somewhere in the range of 380-420 to go on with it. Note also that the regression did get closer and closer to y=x as the sample size went up.

First, the normal caveat about football being a team sport. Each and every time I referenced a running back stat I was really measuring a team stat focused on RB performance. Will YPC change behind a different line? Yes. Will reliability? Yes. Is it still worth looking at? Yes.

Let's all take a second to reflect on Max Unger who I haven't even mentioned in this article.

To be honest I went into this thinking that I wouldn't be able to find a relative reliability skill. I figured that YPC would tell us too much about survival through four yards to find it. Statistically I thought we'd have to settle for better backs being better backs at 1,4, and 25 yards past the line of scrimmage.

I mean, don't get me wrong, I thought there were reliable backs in practice - just that the noise would overwhelm the signal and scouting would reign supreme.

Now I'm convinced that reliability is a measurable skill independent of YPC.

It's not huge. I wouldn't judge a back one way or the other (just using stats) until he's had two or three seasons as a starting back to get up to the 400-500 attempts needed to suss it out.

And what does it mean for you?

Well, given an appropriate sample size and two running backs with the same YPC the one with the greater reliability should be more valuable from a rushing perspective. Big plays are good and all, but consistency is the name of the game for backs.

Conversely at a small sample size a wildly inappropriate reliability relative to YPC means it is time to watch some tape and ask if a back is getting one too many lucky/unlucky breaks in the open field or the opposite at the LOS.

From the Seahawks perspective this is all good news. Marshawn Lynch is a reliable back. When you see him crushing bodies to get an extra yard you're seeing the reason he's better between the LOS and 4 yards than Adrian Peterson. And you're seeing a real, sustainable skill.

Marshawn Lynch is Old Faithful and Peterson is Steamboat. I'd like to see Steamboat go off more but if I've gotta pick one to watch I'm going with the one I know is erupting.

As post script for those of you interested in projecting what the FO values in players it's worth noting that Reggie Bush was also in the top ten for absolute reliability.