Mom? Dad? I think there's a veteran presence underneath my bed.

A not so comprehensive look at the relative value of veterans and cost controlled players that comes to the unsurprising conclusion that cheap players are good.

Share All sharing options for: Mom? Dad? I think there's a veteran presence underneath my bed.

I've never been a profesional athlete so I don't know what their locker rooms are like. I did see Any Given Sunday but that doesn't really qualify me to talk about lockers rooms and I definitely can't assess their health with any authority.

Still, I doubt there is such a thing as locker room cancer. They're rooms. What would it even look like? A growth on a wall? That's probably just water damage. Honestly, I don't think Albert Haynesworth was slinking around his teams' facilities like Cat Woman tearing up roofing tiles. Would have been good footwork and stability training though.

Coworkers can be dicks, sure. They can be awful to work with, or great, or just someone you'd rather not introduce your girlfriend to. And the NFL is a business, even for the rostered players. Their teammates are their coworkers and maybe if you can't stand that Terrell guy up on the third floor your productivity will suffer when you're asked to work with him.

That's fine. The England national football team lost a good player because another, better, player had slept with the poor guy's fiancee or girlfriend or something. It makes sense that even after years of selecting for athletes who can work well with others, and even after considering that all of these guys are going to have basically the same interests, that some are going to find ways not to get along. I'm not sure it makes sense that Doug Baldwin would suddenly catch less balls if Golden Tate skipped his birthday BBQ, but I guess it would make the film study slumber parties at Russell's super awk awk. But, whatever, sure. It's plausible.

Plausible enough that player personality is probably something good coaches and GMs think about!

I'm not worried that the Seahawks front office cares too much about personality. They sign guys with character issues, they cut glue guys, and Jon Ryan's actually Canadian.

In fact I'm absolutely convinced that this front office does not suffer from the most persistent decision making blind spot in sports: The veteran presence.

The idea of intrinsic veteran value is convenient to fans. Players get worse with age. Don't believe me? Look at this probability density contour map of RB yards per season versus age: 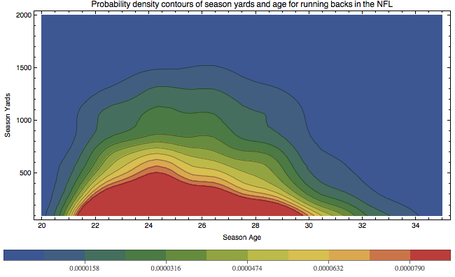 And it's actually even worse than that. What you see above is rife with survivor bias because after their age 29 season running backs get cut faster than someone fronting on 50 Cent. Which is to say, they are actually cut.

Can sports blogs get in rap feuds? I really hope so.

At any rate that decline is how Donovan McNabb went from exciting QB to unnerving grumpy old man, albeit with a great smile. But the players we like, when they age they get some veteran presence skill. And, you know what? The team should totally keep them around for their deep well of knowledge and positive influence in the locker room.

Guys. Sit down for a second. That's why you hire a coach.

Okay, maybe it's weird when a coach wanders around the locker room naked as adam slapping players with a towel. That's something veterans bring to the table that coaches can't. I guess it really could be one of those things that has tradeoffs. I mean, the coach could get fat and he wouldn't know where the commissary is on his first day. And the player would be super swarthy and he would sure as all-get-out know the important team handshakes.

I gotta say though, I think that the cap and roster space considerations may be an incy-wincy bit more important.

I choose to believe that part of Pete Carroll's never-ending competition is recognizing that football rosters can't be backwards looking.

At this point I should do a comprehensive takedown of veteran presence as a football skill. The thing is, you can't. I can't measure veteran presence. I considered using Google to see hits for "Player Name" + "Veteran Presence" to detect whether a guy 'had it.' Not only was that silly idea to begin with but when the results came back Plaxico Burress got 9000 hits and Matt Hasselbeck only had 5000 more. Albert Haynseworth and Kellen Winslow were both above 10k hits. It turns out if you're an old free agent reporters will write your name next to "veteran presence."

But that's exactly my point. Useful veteran presences are only that in retrospect. Every time someone talks about a steadying veteran presence having an effect it's a just-so story.

I can't refute a just-so story. That's why people love them. What I can do is provide a better framework for evaluating when it might be time to let your favorite player go for the sake of the team. I don't even have to invent it. It already exists.

Veterans cost more than rookies - and that's never been truer than now with the new CBA. Maintaining a roster with a large number of players under their first contract means a team can make big splashes on second or third contract players at premier positions - whether those players are in house or from other teams. (See: Seahawks relationship with Minnesota Vikings).

To illustrate, the following is a chart of pre-lockout yearly cap hits for RBs and the Y/A that went along with them. The Whippersnappers are in their age 21-25 seasons while the Old Men are 25-29. 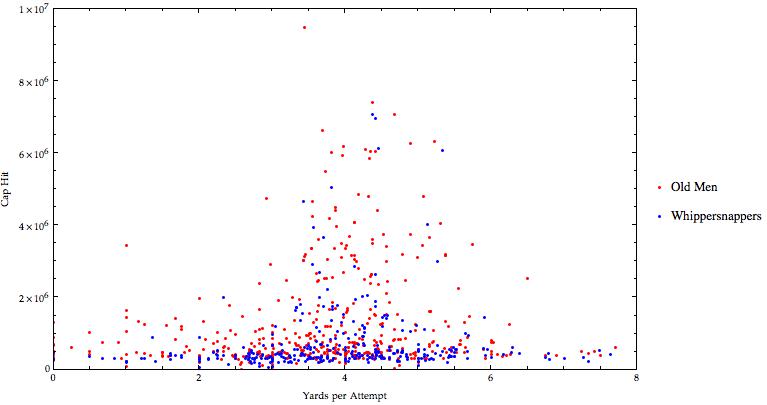 This looks like noise. And a lot of it is. There aren't any real 8 yard per attempt guys but this has a lot of small sample size theatre going on. I didn't select for a certain attempts cutoff because the chart already tells the story with the full sample.

Cutoffs at 100 and 150 attempts look roughly the same but without the sense of pantomime that a lot of points gives.

Even in the heady days before the lockout you could draft a cost-controlled RB who would save millions over a free agent at similar production. If you don't see it well through all that noise here are some absurdly smoothed density plots: 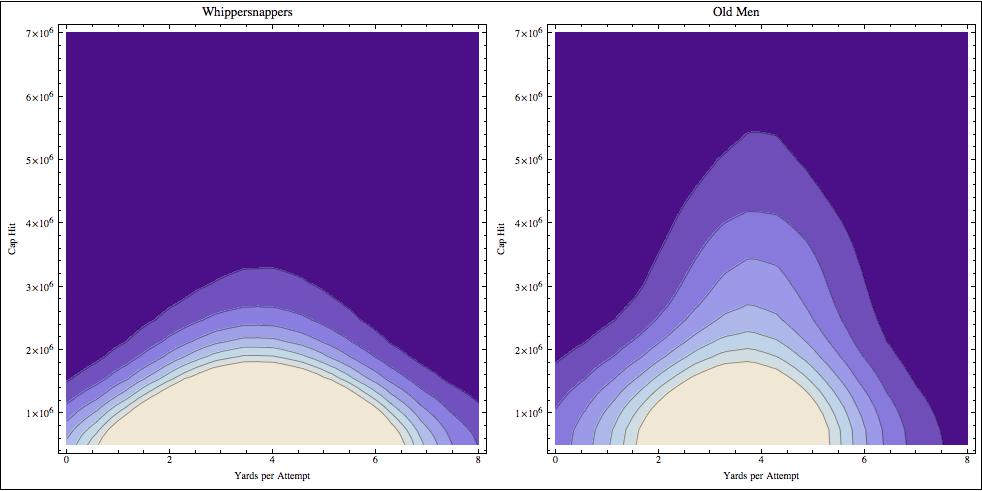 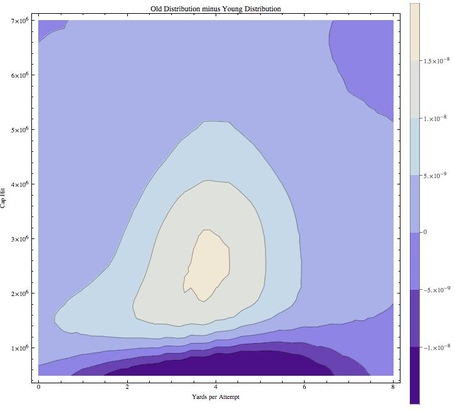 Running back is the premiere fungible position. In my opinion, if you ignore dead money, there are two or three running backs in the league who approach having irreplaceable talent in the coming year. Other than that a good front office with a non-cost controlled RB at 1 should have a cost controlled 2 or 3 with a high upside - and a finger on the trigger or lever if you prefer older metaphors.

The formula is simple to grasp. Finding the production values is hard. That's why you have coaches and managers who have spent decades around the game. But if they ignore the formula then all of that knowledge goes to waste.

I illustrated this with running back because it's a high profile position where production is graded realtively easily. Y/A for running backs stabilizes quickly and, although blocking matters a lot, that's really what you pay them for.

Also it's pertinent to the Seahawks. Marshawn Lynch is highly paid and in the average prime year for RBs. The FO took more backs in the draft then the people whose comments I read on this blog expected. If Christine Michael is everything the actual scouting minds at this site and elsewhere have promised me then he could be a feature back sooner rather than later.

But what's true for Lynch is true of any position player out of his cost controlled years.

A common argument against the idea of cutting veterans, especially for QBs, is that sitting behind a veteran will somehow increase the rookies future prospects. As a lark here is a non-rigorous takedown of that idea.

First the performance of QB cohorts who started playing in various years:

The dashed lines show an interpretation of QB performance that I think is why this idea perpetuates - those lines capture the performance of QBs by averaging each as a single data point. The solid lines, which i think give a more accurate picture, average over attempts for the entire cohort so small sample size spot starters are effectively down weighted.

The year three, four, and five starters have a small enough sample size that their average Y/A aren't significantly different from the years one and two cohorts. Additionally, the number of starters still getting games two years after their first start was close enough to 50% for each cohort as makes no difference. See the following:

None of that is enough to draw comfortable conclusions. Like I said, it's a lark. The first year cohort had an average draft position about a round higher than the third year cohort. The third year cohort and beyond suffer from massive survivor bias. But it does tell us that there isn't blatantly obvious cause to believe that veterans infect rookies with awesomeness by starting in front of them.

And we absolutely 100% know that rookies cost less than veterans of the same skill level.

Maybe we should look at all the veterans as the locker room cancers. They take more resources than rookies of similar skill, somehow cost-controlled players mutate into them every year, and they're impossible to really get rid of. As fans we should be ecstatic every time a veteran is cut and so much the better if we get a draft pick for them. It's like they've metastasized to someone we really hate. And that person paid us!

Okay, so that's not fair. I have feelings and I get attached to players and I get sad when they're given their marching orders pink slip. Part of being a fan is being sad. But be happy when a veteran gets cut in favor a cost controlled player. If you trust your front office to scout then it means your team just got better.

It's okay to like your veterans. But remember, they suck.