To recap, in case you missed some of the early posts on the Nike SPARQ rating we've adjusted for use with Seattle's player prosects, here's some background:

The Nike SPARQ Rating has been tweaked over the last ten years, and was developed inside Nike. Both Davis and I have speculated that Pete Carroll was involved in the development of the system. As Davis put it, "In the early days of SPARQ, Carroll was the highest profile coach in college football. Carroll was consumed with recruiting the best athletes and football players in America to USC, and he was very successful in that endevour. The SPARQ team included Andy Bark, Peter Ruppe and Matt James. Per Scott Enyeart, Andy Bark developed the Elite 11 High School QB Camps, of which Carroll is highly involved. Peter Ruppe is a famous Nike sneaker marketer (including Brand Jordan), and Matt James is an athletic trainer, and all three of these men have ties to Pete Carroll and WinForever. I have seen Ruppe and James speak, in-person, at Carroll's WinForever events."

Further, Seahawks Strength and Conditioning Coach Chris Carlisle has had a big part in the development of the SPARQ program, - as Scott Enyeart put it - 'Carlisle is the "Master Trainer" for SPARQ,' and likely works in conjunction with Nike to design Seattle's offseason program.

According to this Nike SPARQ Offseason Training Program Manual:

The Nike Football SPARQ Training Pre-Season Program was developed in conjunction with Chris Carlisle, the current Strength and Conditioning Coach of the Seattle Seahawks. Prior to coming to the Seahawks, Carlisle was an integral part of Pete Carroll's staff at USC and is credited with developing the explosive style of play that enabled the Trojans to become the most dominate program in college football over the past decade.

So, while we're simply dot-connecting, it seems very likely that the Seahawks use some variation of the SPARQ system, not only for their 'testing' numbers, but also for their offseason training. It's a big part of their program, and likely a big reason they've seemed to focus so closely on the 'rare' types of athletes in the Draft.

This leads to the question. How does a team create explosive plays? Perhaps, by finding explosive players. That's where this SPARQ series comes in.

Luke Willson was the 9th tight end selected in the 2013 NFL Draft. He went a full three rounds later than his college teammate Vance McDonald, whom the Niners chose in the 2nd round. John Schneider, after selecting Willson, made it a point to say that the 6'5, 251 pounder was the 'second-best tester' at the tight end position this year. It's worth noting that our numbers say that he was the best tester, and while it's certainly likely our metrics are slightly different than the Seahawks' front office, it's also possible the first-best tester was some guy we didn't plug in to the equation.

For reference on that, you'll also possibly remember that Schneider also said at one point that Ricardo Lockette was the 2nd rated receiver overall at the Combine, athletically, so it would seem they do evaluate a lot of guys at every position. I didn't rate most small-schoolers or unknowns, but for all we know the Seahawks use different metrics (though I think it's similar to SPARQ, based on the fact Pete Carroll and Chris Carlisle were integral in the development of the system).

Regardless, according to our Adjusted SPARQ metrics, Luke Willson was the top-ranked athlete drafted at the TE position in the 2013 Draft (among all players that had requisite testing done). Considering he caught only a handful of passes in his senior year, I think it's safe to say the Seahawks were primarily interested in his physical upside.

Below are some of the top tight ends in this year's Draft, per our Adjusted SPARQ metrics. It's worth noting here too that Ohio State TE Jake Stoneburner said after the Draft that Seattle had told him at some point that they were going to be drafting him in the seventh round. Stoneburner's Adjusted SPARQ was 125.38, good for third in the class. It's rumored Seattle was also interested in Vance McDonald, and were sad when the Niners jumped Seattle to take him the 2nd, but that's unconfirmed rumor. It seems plausible. McDonald's 124.11 SPARQ score was good for 4th in the class. 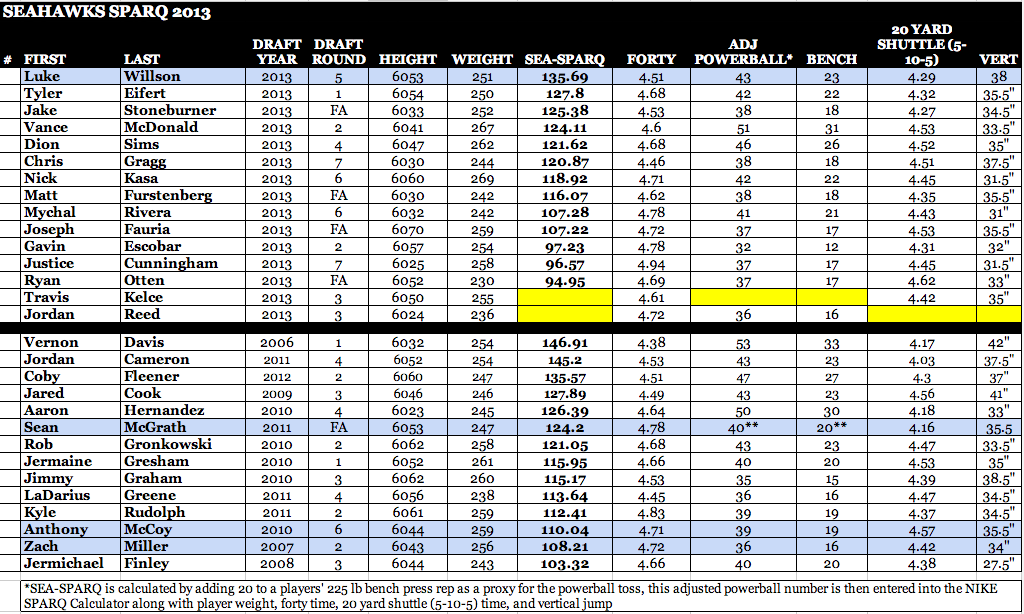 The 2nd half of the table above is populated with current Seahawks and some of the top tight ends in the NFL at the moment, athletically-speaking. Vernon Davis, completely unsurprisingly, takes the cake in SPARQ - he ran a 4.38 40 with a 42" vert at 254 pounds. Cripes!

Following him is former Pete Carroll tight end, Jordan Cameron, whose 4.53 40, 4.03 short shuttle, and 37.5" vert at 254 pounds puts him amongst the elite athletes at the position. For our exercise here, it wouldn't surprise me greatly if Carroll tested Cameron with the SPARQ system when he was recruiting him out of high school.

St. Louis' shiny new weapon in Jared Cook obviously impresses in the SPARQ rating - he ran a 4.49 40 with a 41" vert at 246 pounds, coming out of South Carolina, and should provide a great seam-stretching threat for Sam Bradford going forward.

One interesting player of note on this list is former Henderson State longsnapper turned Seahawks' backup tight end Sean McGrath. I had this picture in my head of McGrath as a lumbering, fundamentally sound and thoroughly unexciting athlete but his numbers are actually really, really good. I had to speculate on his bench press numbers so I pulled 20 reps out from nowhere. He was suffering from a pec injury during his pro day so he didn't bench, but in a totally unscientific method of 'look at him, he looks kind of country strong', I came up with 20 reps. Regardless of that, his agility numbers are actually pretty off the charts despite his rather pedestrian 4.78 40 (slightly slower than Anthony McCoy and Zach Miller).

McGrath ran the short shuttle in 4.16 seconds, an elite number for a tight end of 250+ pounds (would have been first among all tight ends in 2013 and 3rd in 2012), which shows a nice lateral explosiveness factor, and he registered a 35.5" vert, another good number. His three-cone time, which isn't included in the SPARQ, was an impressive 6.99 seconds. A sub-7.0 3-cone would have been 2nd best in 2013 at the Combine, among TEs, and would have been top-4 in 2012, his draft year. It would seem I wholly underestimated McGrath's physical-freak-of-nature factor. Intriguing, especially considering he's been getting a lot of buzz in OTAs and Mini-Camps.

Anyway, if you imagine that McGrath could have benched 225 20 times, his SPARQ would have been right around 124. If you lower it to 15 reps on bench, his score drops a bit to 113 or so. Both are very respectable. The 113 number would have put him right in the range of San Diego's LaDarius Greene, who blew some people away with his 4.45 40 in 2012. Rumor has it that he was highly rated on Seattle's board and they were prepped to snag him right after San Diego made their selection. Either way, Greene's numbers were hurt by the fact he was a relatively light 238 pounds.

Seattle has chosen one other tight end in the Pete Carroll/John Schneider Era, and he went by the name of Jameson Konz. I believe that Konzy is with the Jags nowadays after failing to stay heathy with Seattle, but holy crap his SPARQ numbers are off the charts as well.

Also of note is current Seahawk TE Cooper Helfet, a move-type tight end out of Duke. Helfet has been on and off the practice squad the last year and will look to push Darren Fells and Sean McGrath for a roster spot, presumably. Helfet's athleticism numbers are also very good (see a pattern yet? You should be) - he ran the 40 in 4.71 seconds and the short shuttle in 4.22 seconds at 6'3, 240 pounds. His 6.84 3-cone is absurdly fast, and is buoyed by his very respectable 24 reps on bench. The dude is an athlete. Seattle likes this.

There were no testing numbers for Darren Fells or Victor Marshall, but I suspect both would score well in SPARQ; Fells is 280 and moves well, and Marshall is a former champion sprinter.

The Numbers Game - Analysis of Statistics & the Salary Cap

The Offseason: News & Notes on the Seahawks' offseason