Share All sharing options for: The contract strategy for sub-elite free agents

The new CBA places strict limits on rookie salaries, giving NFL GMs a good motive to pack their roster with young, cheap players. But the CBA didn't lower the cap or remove the inherent competitiveness in the league, so all the money saved in one place ends out driving up the price of veteran talent.

You can only have eleven guys on the field at a time, and only one at each (distinct) position. This means that a marginal difference in ability translates into a big difference in utility-- and therefore value. A running back who gets 5.0 yards per carry cannot be replaced by two running backs who average 2.5 yards per carry. In fact, a 5.0 ypc back could easily be worth twice as much money as a 4.8 ypc back. Brian Burke describes the phenomenon as a comparison between Bricklayers and Gladiators.

Working primarily from market principles (without empirical data), I imagine it breaks down like this: 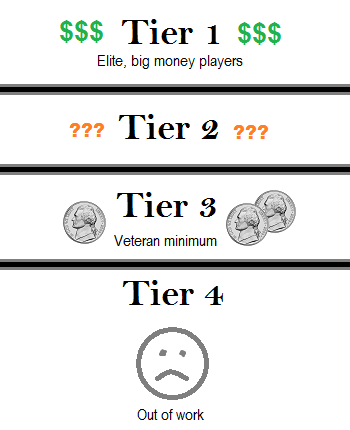 So the top-tier free agents rake in big contracts as teams bid aggressively for their services. A player like Percy Harvin, for example, is desirable even to teams that already have good receivers.

A bottom, or fourth tier of free agents are not significantly better than players under rookie contracts. But where 4th-7th round picks and UDFA's might have once been cut and/or sent to the practice squad, their cheap contracts now make them a more valuable commodity worthy of a roster spot (even while waiting for them to develop), and so those fourth tier free agents are left without a position.

A third tier of free agents are better than the lower draft picks, and worth a slightly higher salary. But they are only valuable to teams with needs at a specific position, and cannot price themselves above the unemployed fourth-tier free agents who would gladly replace them. So they must play for a veteran minimum.

Which leaves a vague second tier. These are players who are significantly better than what's available at veteran minimum, and players who would be useful to several different competing teams, but not a definite upgrade for every team.

And today's question is: How should a frugal franchise funnel funds for fielding fantastically fickle free agents?

I took a quick-and-dirty look at top salaries for valued positions on overthecap.com and made the following observations:

I did not include quarterbacks because starting QB's don't really hit the free agent market. I think that may be true for left tackles also, but the data is already there. "Pass Rushers" includes 4-3 defensive ends and 3-4 outside linebackers. There were a few well-paid 3-4 defensive ends, but that market dropped off quickly (and I expect the market looks similar for middle linebackers and safeties).

Now, it doesn't take a rocket scientist to look at those top salaries and ask himself, "What else could I buy for $13 million a year?" Thirteen free agents at veteran minimum would sure be a good value, but those players might not fill any needs. And you don't have the roster spots. But you can hire two to four guys in the next tier.

By and large, the $3M-$6M per year players are getting multi-year contracts, typically from 3 to 5 years. Is this wise?

It's no secret that players want long-term contracts, because they come with more security in the form of guaranteed money. It's a dangerous sport and careers can end suddenly. On the other hand, franchises want to minimize risk in terms of salary cap commitment. But if they want a player on a one- or two-year deal they have to increase the salary amount.

For example, let's say you have a player who can be hired for $4.5M/year on a 3-year deal with $8M guaranteed. But that same player could be had for $6M on a one-year deal.

A "miss" on a one-year deal costs the franchise $6M, whereas a "miss" on a 3-year deal costs $8M -- an additional hit of $2M. But each "hit" on a 3-year deal saves $4.5M (versus three consecutive 1-year deals). Of course there are intermediate levels beyond hit and miss, but the particulars aren't important. I believe the NFL cap managers have done the math correctly. I believe they have more player value per dollar by giving the players the security they desire.

But I still think they're doing it wrong.

One effect of the new CBA not being accounted for is the increased number of developing players on rookie contracts, who constrain roster limits and provide more possibilities as the proverbial "jar on a shelf". 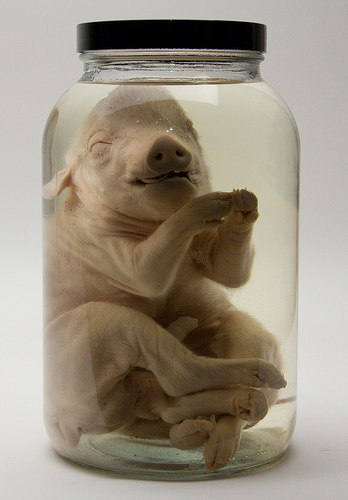 Let's say you pick up a serviceable, tier-two free agent right guard for 3 years, $12.5M total, $8M guaranteed. And he works! Not spectacularly, but adequately. Then at the end of one year, your 6th-round pick from last year's draft has made remarkable progress and is ready to replace the veteran at a fifth the cost. Now you're wasting resources. They can't both play right guard. You're lucky if you can trade the veteran for a 7th-round draft pick, but even that won't save you any cap room because you're still on the hook for his pro-rated signing bonus.

And of course, you can't simply tailor the length of each contract to expire when your young players are ready to take over. The development of mid- to low-round draft picks is even more unpredictable. Worse, if you try to draft away from positions that are already filled "adequately", you lose the ability to take the best player available.

If my speculative analysis is correct, it appears that the John Schneider is several steps ahead of me. Remember Barrett Ruud? The Seahawks signed him as a free agent to play middle linebacker in early April 2012. I couldn't find the specific details of his contract, but the Seahawks had no trouble dumping him four months later-- before the season even started-- to be replaced by rookie Bobby Wagner.

Seattle is giving up more than the veteran minimum for these players (still much less than "tier one" money), but they're getting better players. Most importantly, they are keeping future resources free so they can bid on elite players, re-sign cornerstone players, and continue to cast a wide net in the draft where they choose the best player available and see what cheap, quality talent develops.