Reassessing what we prematurely thought we knew about Seahawk roster philosophy.

Share All sharing options for: Roster Bait and Switch

2012 was the first year I began going hard into NFL draft scouting specific to the Seahawks. As Danny Kelly can attest, I kind of crushed it, picking 5 of Seattle’s 10 picks that year (which is even more interesting when you factor that they only had 7 picks at the onset of day one), including 3 of the first 4 picks. The one guy I missed on, the one guy I ruled out for non-football player reasons, was Russell Wilson.

Everything I knew, or thought I knew, of John Schneider and Pete Carroll’s personnel tendencies basically kept me from even studying up on RW. Instead, I had grown infatuated with Kirk Cousins; a QB with lesser numbers, close to equal leadership skills, and greater, more prototypical quarterback size (6’2"). I still have faith in Cousins, but I am less and less sure of the importance of Seahawk draftpicks (and let’s include UDFA from here on out when I reference draftpicks) being players of unusual size.

The infatuation, or projected infatuation, in the POUS began in PCJS’ first couple years here, with picks like Kam Chancellor, K.J. Wright, Richard Sherman, and free agent signings like BMW, Sidney Rice, Brandon Browner, Alan Branch; each of these players living at the upper end of height/reach of all NFL players for their respective positions. It sure looked and felt like a pattern, like a preference. 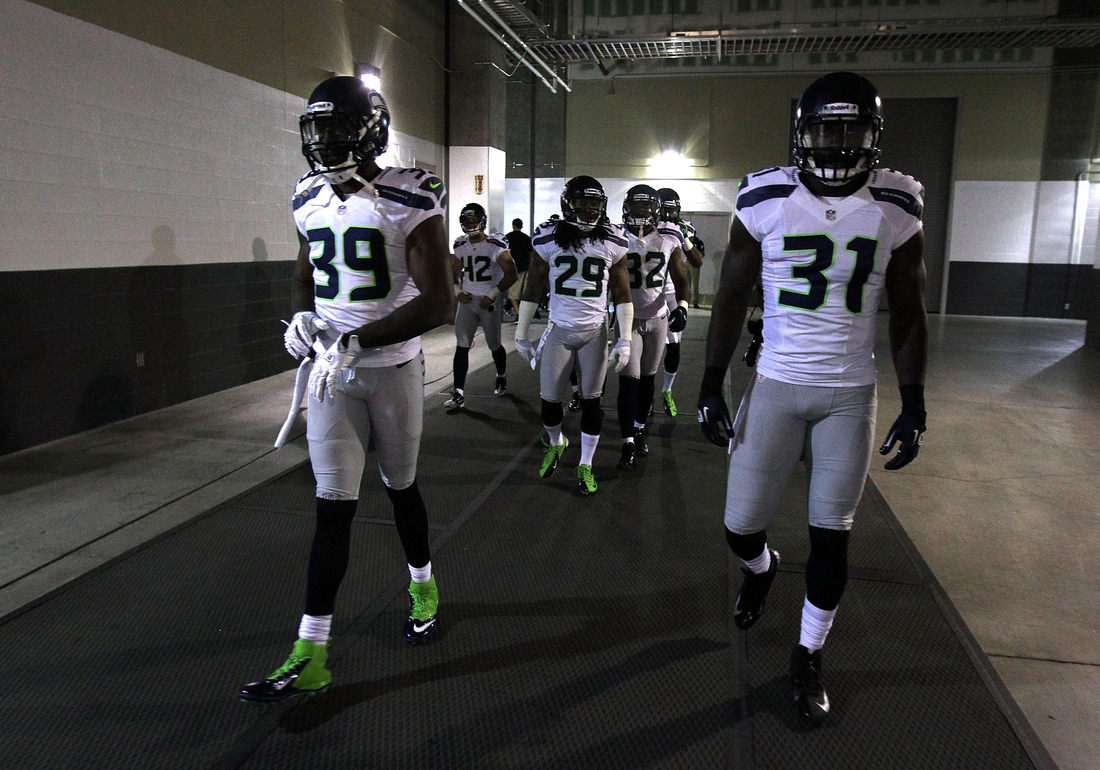 Then that 2012 draft. Bruce Irvin feels about average size for a Leo at 6’3"…Bobby Wagner isn’t KJ-sized at 6’0", but that size is more common for a MLB than a Brian Urlacher…Turbin; pretty normal 5’10" RB… Jaye Howard (6’3"), Korey Toomer (6’2"), Winston Guy (6’1"), Jeremy Lane (6’0"), Jr Sweezy (6’5"), Greg Scruggs (6’3"); all on the upper end of average. Nothing to really draw any conclusions from. The only outlier (oversized or undersized) was that meddlesome 5’11" QB. But we came to terms with it because QB is such a specialized position; where brain and intangibles can mean more than at many positions.

When 2013 rolls around I’m still living high on my horse after my overall success the year before. I really think I’ve got a handle on this Seahawk draft game. I’m gonna lock in on the positions of need, positions where "big" is still "in", and I’m gonna track down the biggest SOB’s at those positions. I want an offensive tackle that’s at least 6’5", I want a 3-tech DT that’s pushing 6’6", I want a weakside LB looking 6’2"ish, etc, etc.  And I really understudied players that didn’t meet, or at least touch, those specs. But I was premature in baiting my roster line.

Know what the Hawks did? They went: DT 6’1" and 6’3", OT 6’4" and 6’3", LB 5’11" and 6’1". Damnit. In fact, the one spot where I actually liked an undersized player for the Hawks (5’11" CB Leon McFadden) is the one spot where Seattle went big (6’2" Tharold Simon). Counter-programming like huh? Had I simply predicted the Hawks’ draft based on player evals and not on "player evals by type", I likely would have kept the Hawks taking Jordan Hill in the 3rd. I loved Hill’s game while at Penn State; incredibly active hands, surprising quicks, and underrated performer against the run. I simply crossed him off my list after sensing the Hawks were targeting bigger bigs. Here is my tweet from March 2nd, almost 2 months before the draft:

Other DT that I'd see as a 3rd rnd possibility is Jordan Hill: http://t.co/cvbA9LQG8K

On draft weekend Jordan Hill was (and still is) my favorite pick from this class. At one point I tweeted that, even though PC had described after rookie camp that Jesse Williams would get looks with the 1's and Jordan getting 3rd downs only, I predicted eventually Jordan would supplant Jesse on the depth chart (couldn't find that tweet though). Either through effort or health, Jordan Hill will show that he was drafted before Jesse for a reason.

If you were following me on draft weekend then you know I was not real psyched about this class. I didn't like the Seahawks taking a RB as early as 2nd round, but I can learn to live with it because I do believe CMike has talent. I was less optimistic about Jesse Williams, Tharold Simon, and Chris Harper. These guys have red flags, to me, either because of work ethic, injury, or both. I like the idea of Luke Willson even though he was a guy I had never heard of, let alone studied, prior to the draft. All of the 6th-7th round guys I was pretty indifferent to. After several weeks of training camp and one preseason game, I don't know that my initial instinct of the draft was too far off.

Whereas I came out of the draft weekend a little butthurt, I think your dose of that disappointment is yet to come, but on its way. But the good news is, after the draft my mood began to perk up because of the Hawks’ UDFA class. Again, my twitter from just after the draft:

So, while I think there is disappointment yet to come for the 12s in regards to guys we have "invested" more in (meaning spent more draft capital on), there is also the recovery and optimism that shortly follows it, when you realize the misses of the draft were compensated for in the UDFAs. Who cares about the Kris Durhams when we have the Doug Baldwins?! It’s already started. The names have already begun to switch.

John Lotulelei I hadn’t studied before the draft because of his underwhelming size, but immediately upon his signing I watched as much film on him as I could find and was extremely impressed. You’ve heard it repeatedly at this point: instincts and aggressiveness. The dude is a lionshark with that mane of his as the dorsal fin. You’ll see the hair first, knifing through the wash, and you know what’s coming: Air Jaws. The pocket has been breached. Even if blockers can catch him to get their hands on him, he still disengages better than many D-linemen. There is a palpable buzz when Lotu is on the field. If Lotu sticks and a Ty Powell fizzles…it’s a push. Hell, at this point, I'm not sure that Lotu won't soon be nipping at K.J.'s heels. 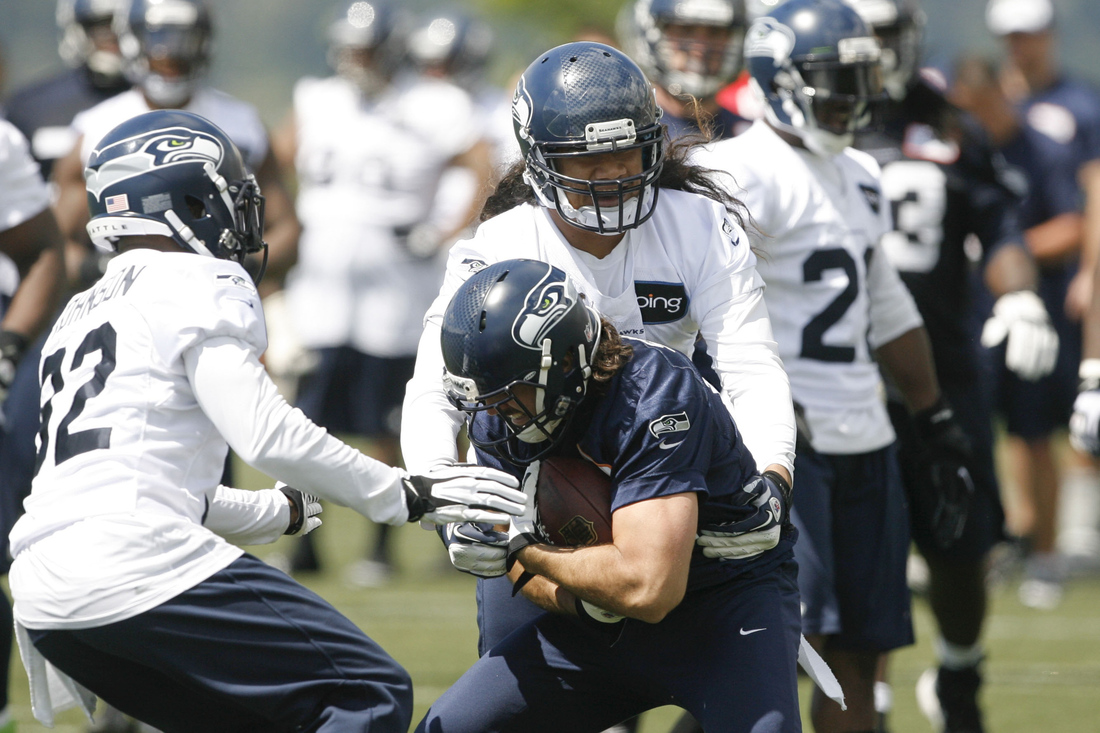 Alvin Bailey was a pretty highly regarded offensive guard coming out of Arkansas. He wasn’t on my wishlist because I was pretty insistent that the Hawks didn’t need to draft another guard. Not in the 7th, not in the 4th (where I would have valued Bailey), not even in the first (as you may remember from the Field Gulls’ writers mock draft, where I loathed the idea of taking Jonathan Cooper there over a DT like KK Short). To get Bailey as an UDFA is fantastic. To get him, move him, and find him succeed as a tackle is stunning and awesome. If we get a stud swing O-lineman, if not an eventual starter, from UDFA, it soothes the burn of not ever getting to see/use James Carpenter.

The last name from the initial UDFA signings I was very excited about was Kenneth Boatright (All I ever talked about was that Boat…the Boat, the Boat, the Boat…we put the Boat in the water, we took the Boat out of the water). Recently injured/waived, Boatright is currently dry-docked and experiencing the Toomer Treatment. He’s still with the team and at training camp, he will simply take an injury redshirt season this year, and we’ll see where he’s at next year. In the meantime, Benson Mayowa has promptly succeeded Boatright as the exciting Baby Clem. Remember…Clem was undrafted out of Georgia. Wink.

The last UDFA I’m hopeful on, but have had less study sample, is one that was brought in later to camp. Perez Ashford originally signed with the Patriots after the draft, but after his waiving the Hawks claimed him. At 5’11"/182lbs, Ashford has none of the size one would have thought the Hawks would need after their history of attempts with guys like TO, Braylon, Durham, Tuinei, BMW, and the fact they already had a solid roster of small WR (Harvin, Tate, Baldwin).

Versus the Chargers, Ashford only had two touches, both on punt returns, but I thought they were impressive. The first return should have been a fair catch, but Ashford tried to make the most of his limited opportunities and returned it anyways. He got two yards but, more importantly, he showed he’s hanging brass. The second return was a solid 27 yard gain; not as long as Walter Thurmond’s but better than Will Blackmon’s. However, punt returner is probably less open of a competition than kick returner, as Golden Tate should have PR all but locked up.

It’s funny that Ashford would be behind Tate as punt returner as, back in April, pre-draft but post Ashford’s visit to VMAC, I thought Perez had strong resemblance to Tate in his game:

Of the UDFA Ashford has the smallest shot of making it to the 53, but perhaps he has been shrouded enough being in the mix of the small, slot WR’s like Bryan Walters, Brett Swain, and Arceto Clark, that Ashford can be the one to make it through to the practice squad.  And from the practice squad, perhaps Ashford will grow as Tate has grown, but with less immediate pressure.

There was a time I would have thought the Hawks would most want to get a big bodied WR like Phil Bates on the PS, but clearly lately I’m starting to reconsider. I’m reconsidering "size" and it’s relation to the Seahawks scouting overall. Where I once thought the Hawks would prefer taking players with freakish size, coaching them up, and scheming to fit their size; now I think the size factor was simply a place-holder with upside. The penultimate scouting philosophy is finding players that are undervalued.

As for that one position the Hawks have remained consistent about drafting big each year? Cornerback. I’m going on record now that this is the year they break from that. I’m calling the shot…5’11" corner in the first 3 rounds. I don’t really think this, but that’s what makes me think it. Just another tally in the long line of PCJS draft/roster bait and switches. And from the switches come the lashings. A whipping most assuredly. Most assuredly a game played #ToThePain.