A quick note on Russell Wilson's overthrow "problem" and panicking

Try not to panic over small sample sizes. Actually, don't be a try-doer be a do-doer.

Share All sharing options for: A quick note on Russell Wilson's overthrow "problem" and panicking

During the pre-season game against whoever it was we played last week a number of overwrought commenters decided that Russell Wilson had an overthrow problem. I'm not here to point fingers or call names but those people were being idiots. Objectively.

At this point even if you agree with my implied message that there isn't a problem you're probably grumbling that stat lines still can't make up for scouting. I know that's putting words in your mouth but that's my prerogative as the writer. I'll put anything I want in your mouth and you'll like it. For now though just words.

The thing is that I agree. For small sample sizes, and for preseason in particular, scouting is just plain more important than stats. But you still need to inform your scouting with a knowledge of how numbers work if you're not going to be an objective idiot.

Here is how the thought process works when you panic over a small sample size: 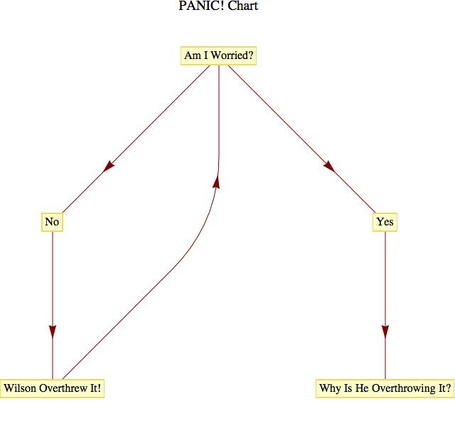 That chart looks weird. It's because "Am I worried?" is on top. That's intentional on my part. Even though the throw comes first  in the decision tree the dominant vertex is not "Wilson overthrew it" instead it is "Am I Worried." Every time there is an overthrow you do the worry check and eventually you'll decide that there's a problem and look for the cause. That's not analysis or scouting, that's narrative.

I think it's difficult to overturn bad narrative with good scouting because it's so subjective. The numbers on the other hand are not. They're objective. Objective and stupid crazy sexy.

I'm going to make some assumptions here with the huge list of complicated numbers you need to do this problem but you can change them to suit.

Assumptions: Wilson can overthrow on 1/4 of his incompletions without it being a problem we need to worry about.

That's it. That's all we need.

Now the math savvy will recognize that if we call all four incompletions overthrows (were they? According to Danny over twitter "no" - this is how I do research) then there is only a 4% chance of that happening (.25^4) at our assumed overthrow level! Wilson has a problem! Except we've seen Wilson play in something on the order of twenty games of football. The probability that this will have happened once? .56 =1-.96^20.

Assuming worst case numbers you guys are worrying over something that was odds on to happen by chance. Stop that.

The reality is that you don't even need to do the math to arrive at appropriate conclusions. You can get a pretty good intuitive sense for when something is a trend or chance by feel if you pause to ask yourself which you think it is. If you don't know the answer then, yeah, break out the calculator. But after just a few times around that block you shouldn't need it to forestall the panic.

That's all. Now I'm going to go look for some other things to put in your mouths.