Seahawks third down analysis vs. Carolina

Share All sharing options for: Seahawks third down analysis vs. Carolina

One thing I specifically wanted to track this 2013 season was Russell Wilson's success on 3rd down. 3rd down percentage is considered a team stat, but I truly feel it belongs to the quarterback as there seems to be so few designed runs on 3rd down in today's game. For instance, the Seahawks faced twelve 3rd downs against Carolina and did not attempt to run Marshawn Lynch one time in those scenarios (the shortest being 3rd and 3).

In the second half of the 2012 regular season, the Seahawks converted 47.5% of the time on 3rd down. There is a little Matt Flynn versus Arizona in the blowout game in that stat, so with Russell at the helm, it's actually a tad better. For the entire year, the Seahawks offense was 40% on 3rd down, good for 12th in the NFL.

Russell went 6/13 against Carolina (46%) with one of them being a kneeldown - so in actuality, he went 6/12 (50%) which is very good. I imagine that Tom Brady, Peyton Manning, Matt Ryan, and Drew Brees have their fair share of kneeldowns in the victory formation as well - so those are probably baked into their stats, to be fair. 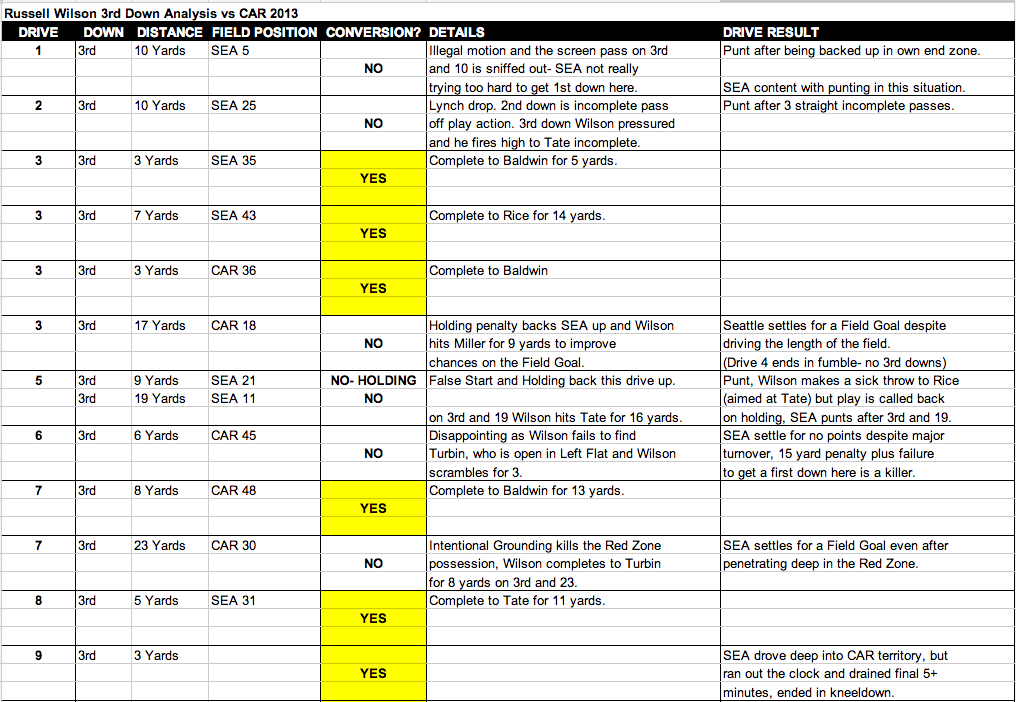 Russell Wilson faced 3rd and 10 on his first two drives and failed to convert either. He threw a screen that was blown up to Lynch - more of a "hope" type play as I believe Seattle was willing to punt and hope to create more room for Jon Ryan (who didn't need it).

The 2nd drive, Seattle passed on all three downs and did not get a completion. Lynch dropped a wide open pass in the left flat. Seattle fails to connect off of play action on 2nd down, and on 3rd down Russell has pressure in his face and fires high to Tate on the right sideline.

On 3rd and 9 or better, Wilson was an impressive 6/7. His worst showing was 3rd and 6 after the Chris Maragos fumble recovery. He keeps looking downfield and fails to see Robert Turbin right in front of him (not because he is short - because he is staring downfield looking for blood). Russell scrambles for 3 yards and Turbin is just looking at him after the tackle like, "Bro, I am right here."

Of the other six 3rd down conversions, Russell hits Doug Baldwin on four of them.

Sidney Rice for one.

Golden Tate for another.

Interestingly, Seattle scores on every drive in which they convert a 3rd down - that Tate catch was huge, in that on the next set of downs, Jermaine Kearse caught his redline touchdown. The only drive in which the Seahawks converted a third down was their final drive, where they were content to run out the clock (but likely could have scored, at worst, a field goal, if they wanted to).

Against San Francisco in 2012 at the CLink, Russell Wilson was 11/13 on 3rd down. This is something to watch for this Sunday.