The 2013 Seahawks Roster: How one of the best rosters in the NFL got better

Share All sharing options for: The 2013 Seahawks Roster: How one of the best rosters in the NFL got better

The Seahawks have taken some shots in the month of August, despite a fairly dominant 4-0 preseason. The luster of the 2013 Draft class has dulled a bit.

DT Jesse Williams and CB Tharold Simon were placed on IR and PUP, respectively. WR Chris Harper was lost to the 49ers after a hours-long stint on the practice squad, and is now a move tight end in the Delanie Walker mold, or so they say. Only five of the Seahawks' 11 Draft Picks made the 53-man roster - RB Christine Michael, DT Jordan Hill, TE Luke Willson, RB Spencer Ware, and T/G Michael Bowie.

Additionally, the defensive line additions have been banged up. Cliff Avril can't get his hamstring healthy. Michael Bennett has some nagging injuries.  Tony McDaniel has battled a groin injury, and the Seahawks let go of familiar faces - Jaye Howard & Clinton McDonald - in favor of the mystery man, D'Anthony Smith.

Before any of that, of course, August began with the loss of mega addition Percy Harvin.

Despite these hits, and despite the obvious defensive line issues on both the interior and edge during the month of September - make no mistake - the 2013 Seahawks roster is much better than the 2012 version.

It has been remarked that prior to the Draft and Free Agency, the Seahawks had one of the best rosters in the NFL, and because of that, it would be hard for new additions to make the 53 man roster in 2013. Yet, when the dust finally settled, the Seahawks have replaced a whopping 19 players with 21 new players who were not on the opening day roster in 2012. No, the Hawks were not allotted more roster spots than last year, but with Percy Harvin on PUP and Bruce Irvin on suspension, this makes that 21-for-19 math work for the short term.

These 21 additions to an already stacked roster is a testament to a youth philosophy, competition-focus, penchant for aggressive acquisition, volume drafting principles, and to their dedication to development of young players on the practice squad. The Seahawks remain one of the five youngest rosters in the NFL, which is an impressive feat to achieve in back-to-back years.

Most of the 21 new players will not be upper-end starters immediately, but provide a powerful long-term under layer of affordable depth. This provides the backdrop to re-sign young star talent to second-contracts. As for the new faces, a few of them will play major roles immediately, and a few will likely blossom into starters down the road.

Take a look at a table I put together that illustrates the changes. I've included the notes both on the table and in text after the table for ease in reading. An X denotes an upgrade, "LOSS" denotes a downgrade, and a blank denotes a wash. 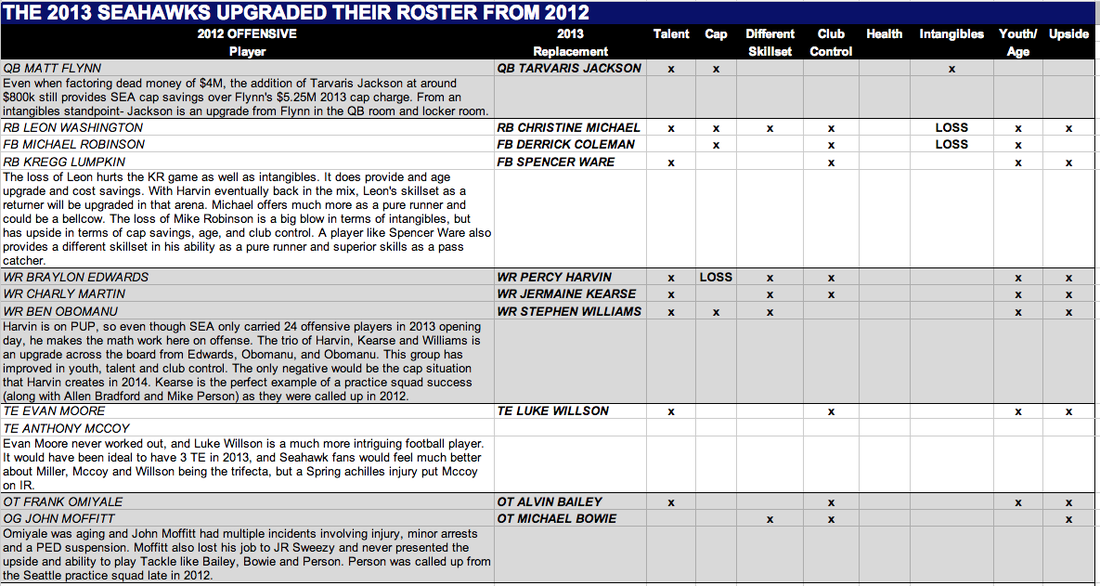 At QB: Even when factoring dead money of $4M, the addition of Tarvaris Jackson at around $800k still provides Seattle cap savings over Flynn's $5.25M 2013 cap charge. From an intangibles standpoint, Jackson is an upgrade from Flynn in the QB room and locker room.

At RB: The loss of Leon Washington hurts the kick-return game, and his loss is probably a loss in the intangible leadership factors he provided. However, it does provide an age upgrade and cost savings. With Percy Harvin eventually back in the mix, Leon's skill-set as a returner will be upgraded in that arena. Christine Michael offers much more as a pure runner and could be a bellcow.

The loss of Mike Robinson is a big blow in terms of intangibles, but has upside in terms of cap savings, age, and club control. A player like Spencer Ware also provides a different skill-set in his ability as a pure runner and superior skills as a pass catcher.

At WR: Harvin is on PUP, so even though SEA only carries 24 offensive players into 2013 opening day, he makes the math work here on offense. The trio of Harvin, Jermaine Kearse and Stephen Williams is an upgrade across the board from Braylon Edwards, Ben Obomanu, and Charly Martin, in my opinion. This group has improved in youth, talent and club control. The only negative would be the cap situation that Harvin creates in 2014. Kearse is the perfect example of a practice squad success (along with Allen Bradford and Mike Person) as they were called up in 2012.

At TE: Evan Moore never worked out, and Luke Willson is a much more intriguing football player. It would have been ideal to have three TE in 2013, and Seahawk fans would feel much better about Zach Miller, Anthony McCoy and Willson being the trifecta, but a spring achilles injury put McCoy on IR.

At OL: Omiyale was aging and John Moffitt had multiple incidents involving injury, minor arrests and a PED suspension. Moffitt also lost his job to J.R. Sweezy and never presented the upside and ability to play tackle like Alvin Bailey, Michael Bowie and Mike Person provide. Person was called up from the Seattle practice squad late in 2012. 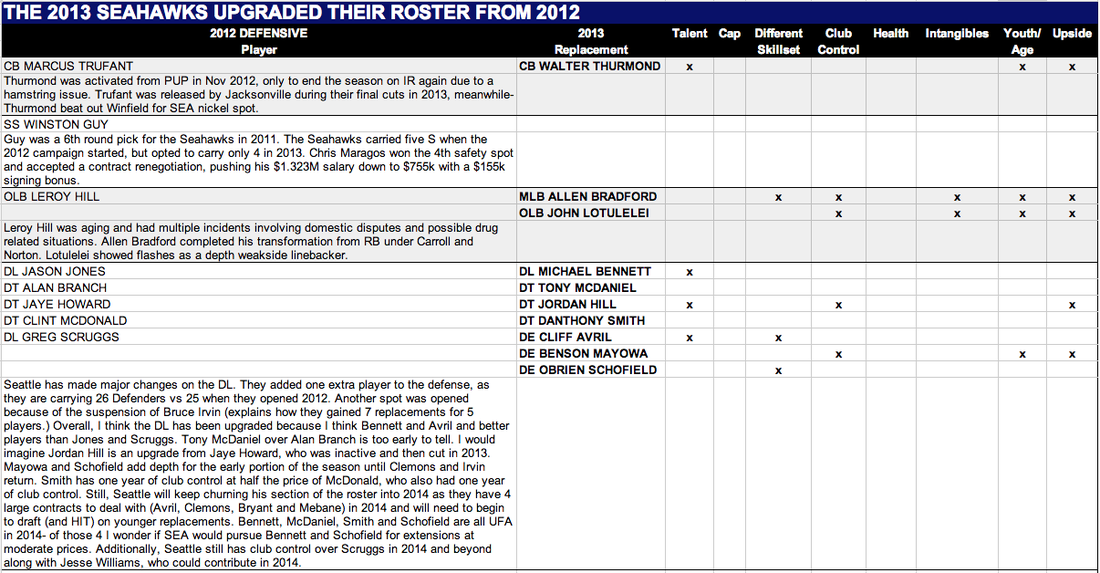 At CB: Walter Thurmond was activated from PUP in Nov 2012, only to end the season on IR again due to a hamstring issue. Marcus Trufant was released by Jacksonville during their final cuts in 2013, meanwhile - Thurmond beat out multiple Pro Bowler Antoine Winfield for Seattle nickel spot.

At S: Guy was a 6th round pick for the Seahawks in 2011. The Seahawks carried five safeties when the 2012 campaign started, but opted to carry only four in 2013. Chris Maragos won the 4th safety spot and accepted a contract renegotiation, pushing his $1.323M salary down to $755k with a $155k signing bonus.

At DL: Seattle has made major changes on the DL. They added one extra player to the defense, as they are carrying 26 Defenders vs 25 when they opened 2012. Another spot was opened because of the suspension of Bruce Irvin (explains how they gained seven replacements for five players.)

Overall, I think the DL has been upgraded because I think Michael Bennett and Cliff Avril are better players than Jason Jones and Greg Scruggs. Tony McDaniel over Alan Branch is too early to tell. I would imagine Jordan Hill is an upgrade from Jaye Howard, who was inactive and then cut in 2013.  Benson Mayowa and O'Brien Schofield add depth for the early portion of the season until Clemons and Irvin return.

D'Anthony Smith has one year of club control at half the price of McDonald, who also had one year of club control. Still, Seattle will keep churning his section of the roster into 2014 as they have four large contracts to deal with (Avril, Clemons, Red Bryant and Brandon Mebane) in 2014 and will need to begin to draft (and HIT) on younger replacements.

Bennett, McDaniel, Smith and Schofield are all UFA in 2014 - of those four, I wonder if Seattle would pursue Bennett and Schofield for extensions at moderate prices. Additionally, Seattle still has club control over Scruggs in 2014 and beyond along with Jesse Williams, who could contribute in 2014.

Where did the 21 new players come from?

Some players were promoted to the 53-man roster from the practice squad during the 2012 campaign, like Jermaine Kearse, Mike Person and Allen Bradford. Others were on the 2012 practice squad, but made the 2013 opening day roster like Derrick Coleman. Others were big time free agents like Cliff Avril and Michael Bennett. Some were bargain priced free agents like Stephen Williams, Tony McDaniel and Tarvaris Jackson.

The Seahawks like to draft in high volume and develop these players, but they also pursue a comprehensive and aggressive pursuit of talent from ALL AVENUES.

The team is deeper, younger, and more talented at almost every position. The team controls many these young players, with upside, for 3-4 years at bargain prices. The team is still young, fast, and should be fairly healthy when compared to the average NFL roster. Additionally, there are several notable Seahawks waiting in the wings - Percy Harvin, Chris Clemons and Bruce Irvin. Tharold Simon could return in 2013. Greg Scruggs and Jesse Williams may be able to provide something in 2014.