"Wow, our defense is good!"

"What the hell is wrong with our offense?"

As usual, the quick-hitting pundits and fantasy-football-obsessed analysts are prone to drawing conclusions from an incomplete picture. They are trying to understand the nature of a whale by watching the tail slapping above the water. But if we illuminate this score with even the most basic statistical analysis, we can see that the poor offensive performances are a bit of a fluke.

And kudos to you, genius, if you got the pun.

The critical factor not contained within the final score is the length of the game. Seattle ran the ball. Carolina ran the ball. Both quarterbacks hit a high percentage, the clock kept on tickin', and wham-bam, thank you Cam, the game was over. 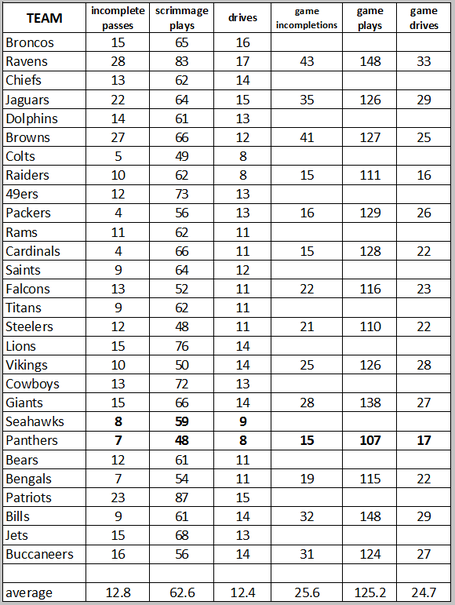 Imagine yesterday's game, unfolding exactly as it did, but with an extra 30:00 on the clock. The Seahawks would take the extra point after their last touchdown, score at least a field goal (maybe a touchdown) instead of taking a knee on the closing drive, and accumulate 16-20 points. That's 16-20 points on a mere 9 offensive possessions. Extrapolating that to Sunday's league average of 12.4 drives per team, and the Seahawk offense is worth 22-28 points. On the road. Against the Panthers.

On the other side of the ball, the Panthers had 7 legitimate drives (this chart counts their 7-yard running play at the end of the 2nd quarter as a full drive) and scored 7 points. The math here is easy. Playing a game of league-average length, the Panthers would have scored 12.4 points.

This also doesn't account for the fact that defenses get tired and thus offenses get better as a game goes on, or that scores tend to spike in the closing minutes as losing/tied teams play more aggressively. So 14 points might be a fair estimate for the Panthers, and the 28-point high-end extrapolation for the Seahawks is very reasonable.

This doesn't necessarily tell us anything predictive about Seattle's scoring for the remainder of the season. Short games are the normal modus operandus, with Seattle averaging a league-low 121 scrimmage plays per game in 2012. But we can be a little more optimistic when comparing different games, and look forward to a team that keeps itself fresher and healthier than the rest of the league as the season wears on.