In the previous two sections (INTRODUCTION TO THE SALARY CAP & THE OFFENSE), I have outlined a $64M cap budget for the Seahawks' offense, as well as allowing additional salary cap for the IR, practice squad, specialists and dead money that has already been scheduled. This leaves about $53M for the defense. Attached is a proposed schedule for the defense - I will start with the D-line.

Seattle simply does not have the cap space to pay both Cliff Avril ($9.25M) and Chris Clemons ($9.67M) their scheduled salary for 2014, even though they are both under club control.

Chris Clemons is not getting home from the weakside, and is likely a declining player. That happens to 30+ year old players coming off injury. Clemons has been one of my favorite Seahawks, but I have to move on. I believe Seattle will cut Clemons but offer Michael Bennett a similar deal to what Seattle offered Clemons in 2012 (about $7M per year over 3 years).

Some fans act like Bennett is Robert Quinn --- even though I believe Michael Bennett is Seattle's best defensive lineman, he walked into the 2013 Free Agency period with a 1-year $5M deal. Maybe his market has changed, but I think $21M over 3 years will get Bennett done, and I think he stays in Seattle. I think he likes Seattle. If Bennett walks, then I think Seattle may pursue Brian Orakpo.

Cliff Avril has been a solid pickup for Seattle, a very good strong side rusher who can get sacks (7.0) and force fumbles (5).

It's nice to have Red, but as the Legion of Boom matures into their 2nd contracts, you can't pay a DE $8.5M in cap for 30 snaps a game. He gets no sacks and can't play on 3rd down unless its short yardage. There just isn't enough value there, even though he is a team captain and locker room leader.

WHO IS TONY MCFARLANE

The best part of the preseason was hearing Pete Carroll call Tony McDaniel anything BUT his real name, multiple times. Call them "senior moments". I really want to keep Tony McDaniel and Clinton McDonald in 2014, but they are both unrestricted free agents, and both have shown flashes of great play in 2013.

I think there will be market for both of them in 2014, but I think Seattle will be able to keep one, but not both. I think they let McDonald walk (and hopefully get a compensatory selection in 2015) because they have Jordan Hill, who can play a similar role. McDaniel may be the one they keep especially after the loss of Red for the reasons I have laid out above.

The Bills signed Alan Branch, and then gave him another multi-year deal a few weeks ago. Branch is getting paid $2.9M in cap in 2014. I think Seattle may be able to keep McDaniel at something costing around $2.5M in cap in 2014. He had a tepid market in 2013, and essentially signed with Seattle for the league minimum. I think many teams will be after McDonald, as something lit a fire under him after Seattle cut him and he consistently delivers sacks and pressure from the interior on passing downs. Obviously, that is pretty valuable in the NFL.

I have Seattle drafting a replacement for Red Bryant in the 4th round (cap hit around $540k in 2014). Red Bryant was a 4th Round selection when he entered the NFL. Assuming the draft pick makes the roster, I then have Greg Scruggs and Jesse Williams battling for the 6th and final spot on my projected Seattle D-line (non LEO types).

If you count Bruce Irvin as a Leo, Seattle has kept about 4 LEOs in 2014. If you count O'Brien Schofield as a LEO, then that number is actually five. When I project the Seattle defense I typically go:

He has been running with 24 on defense and using 26 on offense with guys like Ricardo Lockette and Bryan Walters in the mix as Percy has been on the 53 man roster but not active on gameday.

I digress, but basically, Seattle may use Avril, Irvin, Bennett and Mayowa to fill in Clemon's role in 2014, but I think they will add another pass rusher in the draft. I am using the 4th round as a "cap placeholder" for this analysis, but I would not be shocked if it was Seattle's first pick if they saw the right player.

As much as the offense is in worse shape than the defense at this point, I think Carroll believes edge pass rushers may be more "rare" than offensive lineman or wide receivers in general, so you never know.

Where Seattle goes in the draft (offense or defense) and what round does not change the overall cap analysis of the draft and its impact on the overall cap situation - draft picks are paid almost the same outside of 1st round. So, what I am saying is, don't get too hung up on what round I am projecting the Seahawks to draft a particular position.

Perhaps Seattle adds a traditional linebacker late or perhaps after the draft. Perhaps they are hoping that this player can unseat a Heath Farwell or Mike Morgan. Perhaps there could be a "John Lotulelei" in 2014, but for cap analysis I have Farwell keeping his job again as a special teams guru, even at $1.67M. I have Mike Morgan getting the "Chris Maragos" treatment. Maragos was an RFA in 2013 and Seattle negotiated down his $1.3M tender to $855k. I can see Seattle doing something similar with Morgan in 2014.

I have Seattle drafting a backup free safety to replace Maragos (perhaps Round 6?) and Seattle signing Jeron Johnson to a similar deal as Chris Maragos in 2013 ($855k). I have Deshawn Shead as the "5th Safety" or "10th DB" as Pete calls him a "utility player".

Supposedly, Shead can play corner and safety, which provides value. I do think Seattle re-ups Earl this offseason, and he becomes the highest paid safety in NFL history. I don't see that changing his 2014 cap hit much, as he was already scheduled to be over $5M as it was. Eric Weddle signed one of the largest safety deals in history a few years back, and his "Year 1" can hit was under $4M.

I have Seattle moving on from Brandon Browner and Walter Thurmond. If Seattle does not do a deal with Tony McDaniel or Clinton McDonald, perhaps they would have enough cap to sign Thurmond, but I think he finds a better market elsewhere. He is probably not happy being a "nickel" corner only, and Byron Maxwell is likely the starter in 2014. Seattle should get a nice comp pick for Thurmond in 2015.

I don't think Seattle does a deal with Richard Sherman this offseason, but I think they will next season. I don't think they will lose Sherman next season because they can always use the franchise tag if necessary. In 2015 Seattle can hope and pray the cap goes up, and they can also move on from Zach Miller and/or Cliff Avril and replace them with higher end draft picks.

They can find the money to pay Richard Sherman, and make him one of the top paid corners in the NFL (and he deserves it), but I think it may have to wait. How pissed will Sherman be if Earl is re-upped and he has to wait? I don't know. Maybe it will create a bad situation, but with 2014 as still firmly in Seattle's "Super Bowl Window" I don't think Seattle makes more drastic slashes in cap to make it happen.

I have already projected that Seattle cuts (before contract has expired) Clemons, Rice and Red Bryant. Three major players. I also have Seattle moving on from Paul McQuistan, Breno Giacomini, Mike Robinson, and Anthony Mccoy. Brandon Browner and Walter Thurmond are walking out the door in my scenario. Clinton McDonald is gone. Maragos gone.

Not sure Seattle wants to cut another player when they can Franchise Sherman in 2015. This assumes that a deal with Earl gets done this offseason. If an Earl Thomas deal does not happen- then perhaps a different strategy is set in motion- as perhaps you are forced to sign Sherman and then Franchise Earl in 2015. Too many variables for this analysis. 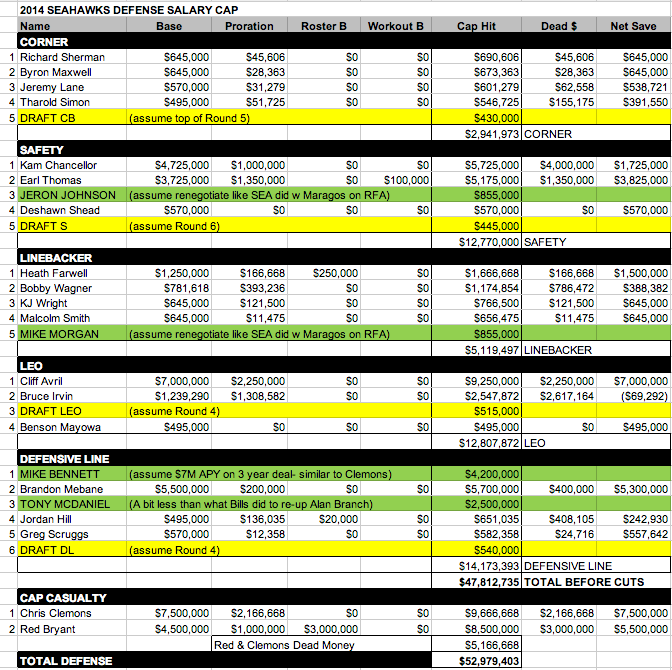 You know where to find me.