Seahawks 3rd down notebook: By the Numbers, Weeks 1-3

Share All sharing options for: Seahawks 3rd down notebook: By the Numbers, Weeks 1-3

I've been breaking down the Seahawks' successes and failures on third downs over the past week -- Part I is right here, and Part II is here. For today, let's look at Seattle's third down situations against Denver, and sum up their productivity by the numbers:

The Seahawks have converted one 3rd down of 7 yards or longer during the entire first three weeks of the 2014 season. They re 1 of 14 (7.1%) in converting these "3rd and Long" and "3rd and Very Long" situations.

Essentially, the Seahawks have been 5-of-12 on 3rd down all season (or 41%), which is solid. If they were a bit more effective in long yardage, building on top of their short and medium play, they would be a very good NFL team on 3rd down.

The Seahawks' offense was afforded many opportunities on 3rd down because the defense shut down Peyton Manning for most of the game, and Seattle gained extra opportunities in Overtime. They faced 17 3rd downs, 15 in regulation -- while most games have around 12 opportunities. 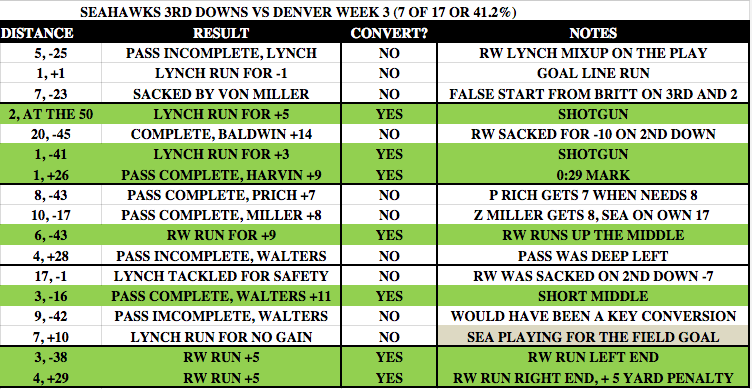 The Denver game reflects the entire season for Seattle on 3rd downs:

-- The Seahawks struggled on 3rd down in the 3rd Quarter and in long yardage versus Denver, and they have struggled in the 3Q and long yardage all season. 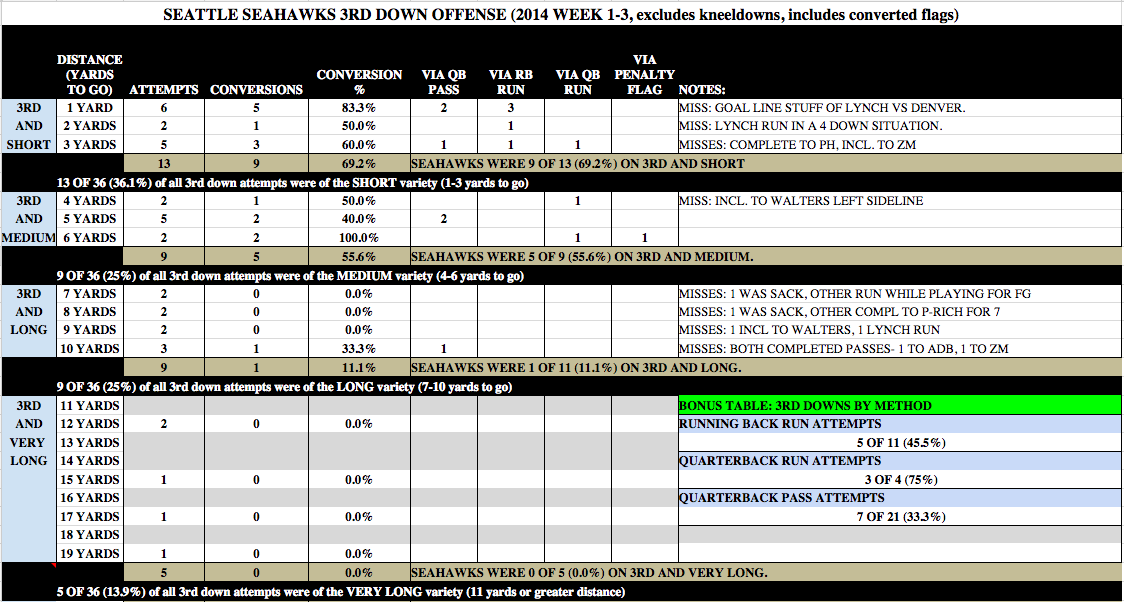 The Seahawks function much better on 3rd down when their "Triumvirate" of Russell Wilson, Marshawn Lynch and Percy Harvin has a short yardage situation and various run/pass options. Every NFL team will function better in short yardage as opposed to long yardage, but with the Seahawks, the effect may be even more pronounced.

Consider -- the Seahawks have in their arsenal, perhaps:

*The NFL's #1 running back inside the tackles with Marshawn Lynch
*The NFL's #1 Scrambling quarterback threat (not in terms of pure speed, but in terms of elusiveness and effectiveness in gaining minimum yards needed, throwing on the move, and smartly avoiding hits)
*The NFL's #1 Bubble Screen/Fly Sweep threat in Percy Harvin

The Seahawks have shown to be far less effective in long yardage, when passing is the only real option, possibly because their offense spends more time working on play action, zone read running, running the football, plus now the bubble screen and short passing game.

In fact, the increase in short passing in 2014 may in fact be the desired method to ensure 3rd downs are a bit more manageable (designing higher completion passes on 1st and 2nd down IN THEORY may create shorter 3rd down distances).

The Seahawks player strengths on OL, QB and at the skill positions tend to lean toward the type of offense conducive to 1st and 2nd down. Still, the 3rd and long scenarios will pop up in every game, through no fault of anyone -- it's just a part of football. Imagine the succession of an incomplete pass and a RB run for 3 yards -- no one's fault, necessarily -- just regular football plays, and then you quickly find yourself in 3rd and 7. You will face this in every game, and the hope is to convert at least one, perhaps two of these per game.

The Seahawks need to improve execution in this area in order to truly dominate opponents and separate in the 3rd Quarter. I think the 3rd and long is more about execution and really we need to see this from all three components:

Russell Wilson has a gaudy traditional passer rating of 108.9 (3rd best), while he has an ESPN TOTAL QBR of only 54.2 (23rd best in the NFL). Detractors of TOTAL QBR can point to the flaws in the calculation, but I use this to illustrate the fact that surely TOTAL QBR knows that Wilson has been less than elite on 3rd downs as a passer only.

As an example, when Wilson fires to Paul Richardson for 7 yards on 3rd and 8 (and this is not to blame RW or P-Rich for that play, they need to sync up better, and cleaner protection would help too), I would imagine TOTAL QBR docks you for that play since it was not "successful."

Traditional passer rating would give that play a 95.8. If you played a fictitious game and completed 12 passes out of 12 attempts to Paul Richardson for 7 yards regardless of down and distance with no TDs and no picks, you would have a passer rating of 95.8.

That's why I like to look at both traditional passer rating as well as other EPA based (expected points added) advanced metrics like TOTAL QBR -- knowing they both have flaws -- but by ingesting all types of information it really can round out your view when analyzing a player or team.

I will be working with Danny on some GIFs to illustrate some successful and not-quite-successful 3rd down scenarios next...