Share All sharing options for: The 2014 Seahawks' offense looks different

Seattle fans are accustomed to a certain kind of offense with Russell Wilson at quarterback, but there's something a little different this year. Consider the following data, courtesy of www.sportingcharts.com:

It's difficult to see how dramatic of a change it is in table form. So, plots: 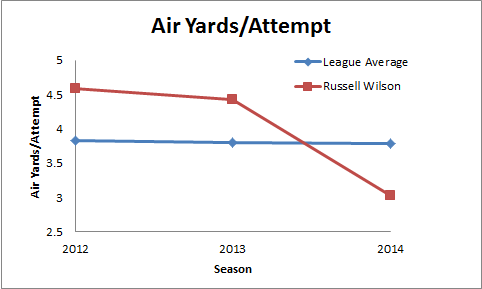 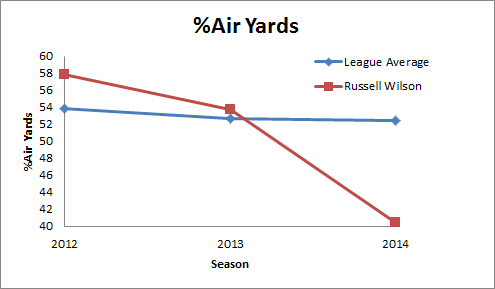 It's a drastic change from previous seasons, and likely not a revelatory one to those who have watched the first three Seattle games. The Seahawks just aren't attacking much with the deep ball, and Wilson's yards-per-attempt (YPA) has declined from 8.2 to 7.5 this year.

The important objective here is not to state what's fairly obvious, but to delve into the why. An oft-mooted reason is the presence of one William Percival Harvin III, but Seattle continues to run the same YAC-focused offense even in his absence, utilizing Bryan Walters as a direct replacement. There's something beyond personnel that's different.

That difference: Seattle's 2014 opponents have played in a far different manner than in 2013. The following was shared with Field Gulls by the excellent Lance Zierlein.

Here is the 8+ man box data from STATS Inc that the NFL Teams use:

To be clear, this is a small sample and not necessarily indicative of what Seattle will face for the rest of 2014. While defenses do seem to be playing more conservatively against the Seattle passing attack, it's worth noting that the Seahawks themselves are helping to enforce this change.

'11' personnel usage has significantly risen, the fullback's role has declined, and the team has utilized formations and shifts which make it more difficult for the opposition to stack the box.

The reason behind this data isn't really the point here. There are mitigating factors, but the opposition tendencies still provide an instructive look at exactly why Seattle has attacked differently in 2014.

It's pretty clear that defenses have struggled to have much success against the Seahawk offense this year, even with the shifting passing game. While Wilson's output (measured by YPA, not passer rating) has declined slightly, the run game is quite healthy.

In 2014, Seattle's Rush Offense DVOA ranks first at 25.4%. By contrast, the team accrued a mark of 6.4% last year, finishing a distant seventh behind first-place Philadelphia (23.6%). Yes, small sample (!!), but it's not a difficult line to draw: Seattle's running against 8+ boxes about half as often as last year and been much more (much, much more) efficient as a result.

As an aside, this conversation provides a pretty interesting context for quarterback evaluation. Although Seattle's Pass Offense DVOA has actually increased from last season (35.9% from 27.4%), Wilson's PFF grades and QBR have gone downhill. Neither of these systems credit the QB with YAC accrual, and his statistical profile doesn't suggest decline in any category beyond YPA and %YAC. It seems likely that his increasingly mediocre PFF/QBR results are directly related to these changes.

Metrics measure exactly what we tell them to measure. YPA (yards per attempt) goes down, completion percentage goes up, QBR goes down, passer rating goes up. Passer rating isn't a perfect stat (probably overvalues completions), but neither is QBR (probably undervalues effect of QB on YAC). I'd guess that Wilson's performing just about as well as he did for much of last year, with similar strengths and weaknesses.

As noted by Davis Hsu, there are clear areas in which Wilson can still improve, including third-down efficiency. It just seems that his play this season has been less a function of his own inability to attack and more about the way defenses have approached the Seattle offense; conventional wisdom tells us that teams stack the box against the Seahawks, but the very opposite has been true thus far. Whether it be due to a deathly fear of Harvin, a dangerous quarterback, or some hybrid of the two (ding, ding), opponents are defending the Seattle offense much differently in 2014.

This is something to monitor as the season progresses and a larger sample becomes available. Considering Seattle's run efficiency, it's possible that upcoming opponents are forced to pack the box and the passing game returns to being explosive.