Nine Score and One Lombardi Ago

A look at how dominant the Seahawks' defense was down the stretch, through the prism of all nine touchdowns allowed after the bye.

Share All sharing options for: Nine Score and One Lombardi Ago

We're in Week 12 of the NFL season, and the eventual Super Bowl Champion Seattle Seahawks are enjoying their bye. They're 10-1.

The Hawks will lose two more regular-season games. They won't lose in the playoffs, however. Instead, they will cap off a championship season by gathering wide acclaim as one of the all-time great defenses in history.

That's in part because they will give up a mere nine touchdowns over the eight games that remain. A pace of 18 over a full season -- practically nobody does that. Context:

Oh, and the Seahawks set that pace against the following offenses, as ranked by weighted DVOA:

Yep, the offenses Seattle faced down the stretch averaged an 11.5 ranking, and more often than not, they ranked in the top seven of the league. I'll wager the 2000 Ravens and 2002 Bucs faced no such gauntlet.

So that's impressive. There's more yet -- I'd like to posit that Seattle was even better at keeping teams out of the end zone than the stats indicate. Of the nine touchdowns allowed:

* Four were inconsequential to the final result

* Two were on passes tipped by the defensive back

* One occurred with six seconds left in a half

* One, and one only, came from a team with fewer than 10 wins

* One, and one only, came from a team in the bottom half of weighted DVOA offensive rankings.

There is tape for each touchdown. There might even be .gifs, .gifs of sadness, because I know you love .gifs even if they are frosted with unhappiness. On with it, then.

What and Who: 2-yard catch by TE Jimmy Graham.

Did it matter? It was their only score in a 34-7 whoopin'. What do you think?

A .gif of sadness was unavailable, so I found this instead

What and Who: 8-yard catch by TE Vernon Davis.

Did it matter? Lots. The Niners were shut out for the next 29 minutes of play.

Was it fluky? Not really. The timing was unfortunate, and Wagner alllmost makes the tackle at the 1-yard-line, but Davis is athletic enough to lunge past the goal line before his knee hits the turf.

Link to video at seahawks.com 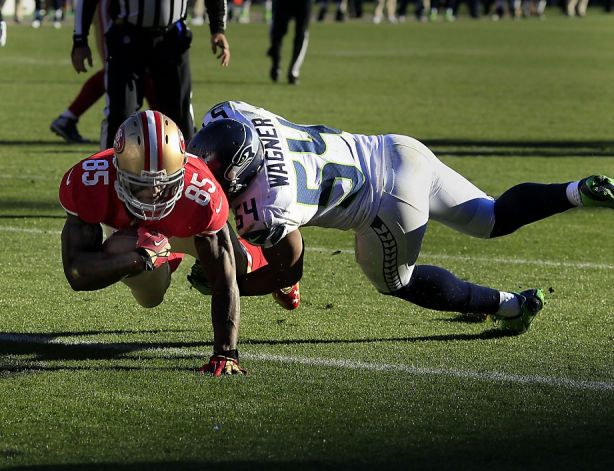 What and Who: 31-yard catch by WR Michael Floyd

Did it matter? It led to Russell Wilson's only home loss of his career. Yeah it mattered.

Was it fluky? Very. CB Byron Maxwell tips the ball, yet it caroms to the receiver, then Maxwell hits it again in Floyd's hands. 98 times out of 100, that ball falls incomplete. It was Floyd's only catch of the game.

What and Who: 2-YD catch by TE Jared Cook.

Did it matter? Maybe to Cook's mom.

Was it fluky? Nope.

What and Who: 1-yard run by Khiry Robinson.

Did it matter? No, not even after Golden tried to make it matter.

Was it fluky? Robinson only carried the ball 54 times all year, scoring a grand total of once in the regular season. So, kind of fluky. It also represented the Saints' only third-down conversion of the entire second half. So, kind of fluky.

This will have to do in place of a .gif of sadness; what an astute celebration, Khiry 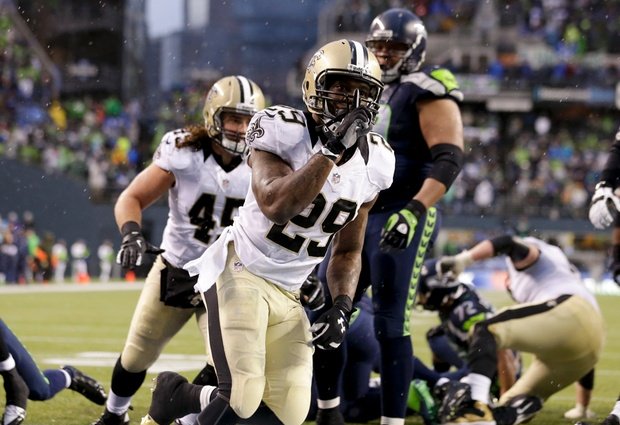 What and Who: 9-yard catch by Marques Colston.

Did it matter? No, not even after Golden tried to make it matter.

Was it fluky? It was on fourth down and the Hawks were in a prevent-style defense. It wasn't fluky but Seattle's going to thwart that kind of touchdown way more often than not, if it's playing honest defense in a close game.

.gif of sadness that happened on the next play... Lions, buyer beware

What and Who: 1-yard run by Anthony Dixon.

Did it matter? At the time? Sure.

Was it fluky? Another fourth-down conversion. Dixon had been stuffed on the previous play, which was the same play call. Ballsy, but not technically fluky. Still pretty telling that it took four downs to make it happen.

What and Who: 26-yard catch by Anquan Boldin.

Did it matter? If you view tipped passes as a kind of foreshadowing, then yes.

Was it fluky? Hell of an athletic play is what it was, probably not reproducible. Under heavy pressure, Kaepernick fires a jump-ball missile that only three guys in the league would even consider trying. Earl tracks it, and tips it, because that's what we do, but the throw's velocity survives his outstretched hand. Somehow, Boldin adjusts and catches it anyway in the back of the end zone. Hell of an athletic play.

That's unnecessary, man, considering the quality of the footage below.

Another actual .gif of sadness but damn those are some grown-ass men out there

What and Who: 14-yard catch by Demaryius Thomas.

Did it matter? No team has ever been shut out in the Super Bowl. Historically, yes, it mattered.

Was it fluky? Yet again, it takes an offense four downs to reach the end zone against the Hawks.

Every story needs a moral. This story's lesson is clear: if you're good enough and lucky enough to reach the end zone versus the Seattle Seahawks, it might not even matter. Good lesson.