Getting Russell Wilson locked up long-term: A make-sense quarterback mega-deal

Breaking down a possible deal that would be a "win" for both sides.

Share All sharing options for: Getting Russell Wilson locked up long-term: A make-sense quarterback mega-deal

(**This is an updated blog with revised numbers after some great interaction and information about "New Money" from Jason Fitzgerald at OverTheCap.com. Overthecap is the best salary cap resource on the internet, and I have been saying that for a long time!)

When an NFL quarterback signs an extension, the agent and media tend to shock the general public with the face value of the contract, the number of years, and the so-called "guaranteed money".

After a few days, or sometimes, a few hours, the real numbers and details emerge and we find out if the deal was legitimate, or - to put it nicely - "fluffed up". Sometimes we find out that the guaranteed money in the deal is not truly guaranteed, and we see the points in time during the contract life where the NFL club has "outs".

For the sake of analyzing the upcoming contract for QB Russell Wilson, I wanted to focus on two aspects that are often overshadowed by the initial headline numbers like Face Value, APY (Average Per Year), and Guaranteed Money. I also don't think the overall length of the deal is important (it will likely be 6-7 years). The problem with "APY" is that APY can be inflated by the back end of the deal. In the back end of a deal, the club can move on with little pain - the guaranteed money has been paid and the dead money proration has expired.

When looking at a quarterback, I believe the guaranteed money is not as important as "Three Year Cash," because a QB signing this type of mega deal is usually not going anywhere in the first three years, for a variety of reasons. The club typically believes this player is very hard to replace, the guaranteed money is usually running into Year 3 and 4 anyways, and the dead money hit from the signing bonus usually makes "moving on" unlikely in these early years of a mega-deal.

Also, a franchise quarterback has a longer career lifespan than a typical NFL player. A typical NFL player may see a quicker decline in his speed as he ages, and therefore a big decline in his skill level. A quarterback is in danger of career ending injuries just like any NFL player, but again - most are not dependent on their speed to earn their keep, so they can play past the age of 35 years old. Of course, an NFL quarterback cares about his guarantees, but his perspective may look a little bit different than perhaps a Linebacker or a Running Back.

Below is a "make sense" deal for Russell Wilson that I think provides some key wins for both sides. Reminder - none of the negotiation for this deal is supposed to happen, per the new CBA, until February 2015.

Also, for the sake of this write-up, any Roster Bonus or Workout Bonus will be lumped into the category of "Base Salary"

(**Initially, I had Wilson's 2018 Base Salary at $20M, but I revised that down and the rationale is explained below)

Let's go through the components:

$30M sounds like a lot of money. And it is. A $30M signing bonus would trail only Drew Brees ($37M) and Aaron Rodgers ($35M) in terms of signing bonuses on current deals. Tom Brady had a $30M signing bonus as well, but I believe that was more a "cap restructure" than anything else.

A $30M signing bonus would trump Joe Flacco at $29M, Matt Ryan at $28M, Matt Stafford at $27.5M, and blow out Colin Kaepernick at $12.3M. Why would Seattle do a signing bonus this large? Three reasons come to mind:

(1) To make a statement and reward Russell Wilson, a player that the Front Office loves

I propose a $2M base salary in 2015, which shouldn't be a problem considering Wilson would receive a $30M signing bonus under this scenario.

Players like Peyton Manning and Jay Cutler took much more in base salary in Year 1, but they took small (or none) in signing bonus - so really not an apples to apples comparison there.

This would be the first sticking point of the negotiation I believe. I propose a $14M base salary in 2017. This would bring Russell Wilson's "3 Year Cash" to $56M.

At this point, Jason's input to my original numbers really becomes helpful. Matt Ryan received $63M in his first three years, but only $53M was "New Money". Matt Ryan had one year left on his original 2008 Rookie deal when he signed his new contract. Ryan was set to receive $10M in 2013 before signing his new deal. The "New Money" to Matt Ryan in 2013-2015 would be $53M.

In the end, I settled on $56M for Russell Wilson in his first three years, with about $55M of that being "New Money" (since his original 2015 was so low).

Again, in my original blog, I had Russell Wilson with a $20M base salary. When analyzing the "New Money" information I received from Jason Fitzgerald, I have revised that down to $14M. This $14M in 2018 brings Russell Wilson's total cash in first four years to $70M and his "New Money" to $69M. Here is my thinking:

Taking in all these data points - I settled on $70M in Russell Wilson's first four years, or about $69M in "New Money."

Again, using the $70M number for the first four years AND the "Year 4" figures for the Quarterbacks I just listed, I feel pretty good about $14M in 2018.

The proposed structure above has Russell Wilson's guaranteed money runing out in Year 4 (2018). Under the structure proposed above, only $8M of Wilson's 2018 $14M in base salary is guaranteed. If Seattle wanted to cut Wilson in 2018 they would have to take an $8M hit for his guaranteed money and $12M in dead money - making his total cap hit $20M.  If they kept him, his cap hit would be $20M. Unless Wilson experiences some sort of injury or performance disaster - he should feel like his entire Year 4 salary is likely to be obtained, even though only $8M is guaranteed.

Wilson's signing bonus, even if it's on a six or seven year deal, can only be pro-rated over five years, so cap hits would be as such: 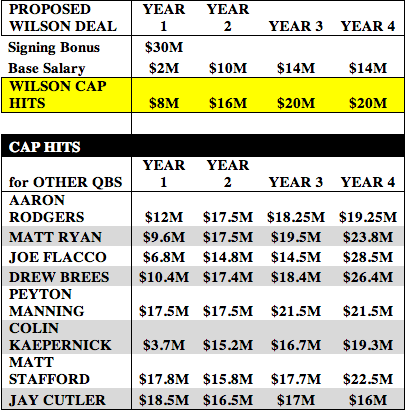 Note: Any deal Wilson will do will be more complex than the one outlined above. The "Base Salary" will likely be a combination of Base Salary, Roster Bonus, and Workout Bonus. There could be a one-time payout that could boost Wilson's cash, while moderating the early cap hit for the club. The $64M in guaranteed money may actually have some club options, and may include some outs for the club. I am not proposing a deal as complex (and as fluffed up) as Kaepernick's deal, but any deal will have more complexities than the one outlined above.

It will be interesting to see what the Bengals give Andy Dalton. That won't be a rock solid "Comp" for Wilson, but it will create one more fresh QB contract to add to the overall analysis.  I believe Wilson will get a deal around the time of Cam Newton (Spring 2015), but I am not sure who will go first.  I do believe that Luck, with his 5th year Option, will get his deal after both Wilson and Newton.