Share All sharing options for: 12 tasty roster tidbits on the Seahawks' 2014 offense

A few tidbits on the Seahawks' offense that interest me, and may possibly interest you:

(2) Not one member of the Seahawks' RB, TE, or WR group is scheduled to be an Unrestricted Free Agent in 2015 (There could be cap cuts with either Miller or Lynch or both, RFA situation with Kearse, and some Exclusive Rights FA situations with Walters and Lockette, but no true UFA in 2015). The Seahawks have very strong club control at the skill positions.

(4) The salary cap hit for the 25 players on Offense is $59.8M. There is additional money for IR, Practice Squad and Dead Money for Cut players, but essentially, the cap hit for the guys on the active roster is about $60M on offense. This makes sense--with a league-wide cap of $133M--you figure about $60M for offense, $60M for defense and the rest for specialists (3), IR, P-squad and Dead Money.

(6) Of those nine players that entered the NFL as Undrafted Free Agents, six of them spent time on the Seahawks' Practice Squad before being called up to the 53-man roster: Derrick Coleman, Cooper Helfet, Jermaine Kearse, Ricardo Lockette, Bryan Walters and Lem Jeanpierre. That is impressive player development.

(7) The oldest player on offense is Tarvaris Jackson, 31 years old. The youngest player is Paul Richardson, he is 22 years old.

(9) The Offense has only six new faces from 2013: Cooper Helfet, Paul Richardson, Kevin Norwood, Justin Britt, Garry Gilliam and Steve Schilling. Considering the fact that the offense returned 19 players and only four new rookies, an average age of 25.75 is quite amazing.

(11) There is only one player the Seahawks are counting on for a key offensive role that is "new"...Justin Britt. If this offensive unit is good in 2014, and most of us suspect that it will be, there is a very good chance 2015 will bring similar success.

(12) CAP THOUGHTS: The Seahawks have $51.3M committed to 17 players in 2015. This figure does not include modest salaries for Lockette and Walters, who are under control as exclusive rights free agents. Jermaine Kearse is under 2015 control as a Restricted Free Agent. Kearse will probably earn about $2.4M or so in 2015 under a RFA tag. When you factor in rookies, paying the ERFA, RFA and a budget of about $65M on offense in 2015, it leaves you about $8-9M for Russell Wilson's new extension.

While I suspect Wilson will earn over $20M APY, I believe his 2015 cap number will be about $8-9M (scheduled for about $950k as of now). So, if the Seahawks want to extend Sweezy, they will have to cut Zach Miller if they wanted to leave the rest of the roster untouched and play inside this $65M budget. If they wanted to do new deals for Sweezy and Carpenter they would have to get a little creative, perhaps "borrowing" from the defense or trying to use rollover (if they have any), but things would get "tight". 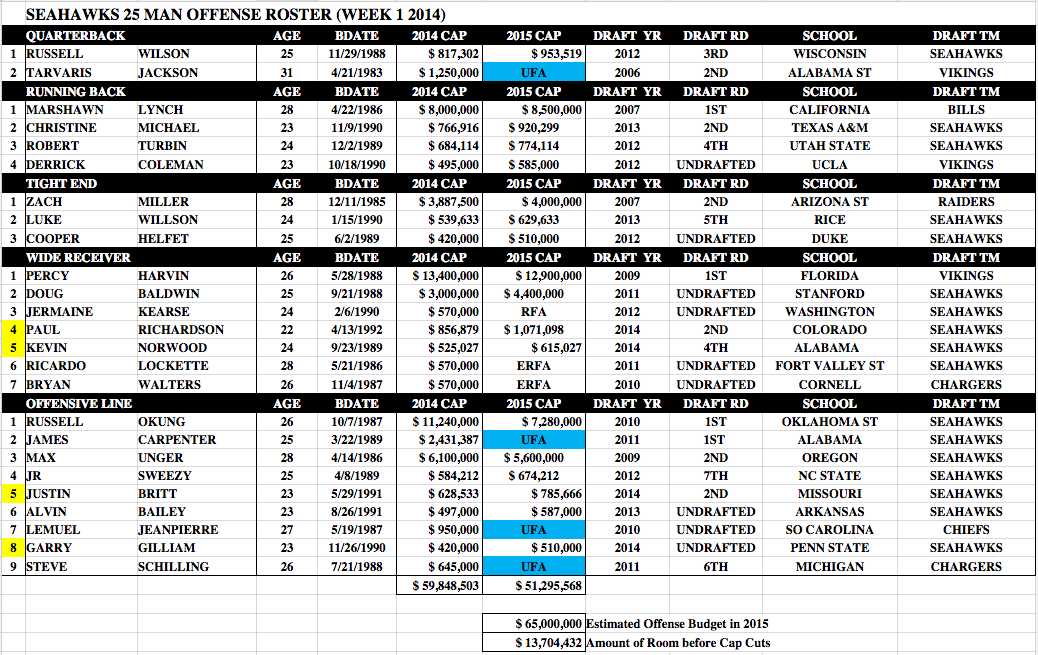