Seahawks vs. Redskins: Keys to the Game on Sunday

I'm just kind of going to wax poetic here about the Seahawks' matchup with the Redskins, mostly on why I think they'll beat down those Ronald McDonald looking clowns on Sunday. Just kidding, it will probably be a really close game. They do kind of look like Ronald McDonald though.

Share All sharing options for: Seahawks vs. Redskins: Keys to the Game on Sunday

Our Seahawks are favorites this weekend, on the road, in Washington DC against a team that has won their last 7 games. Let that sink in for a moment... I'm one of the most optimistic people (I called 11-5 here) I know, and I can't even wrap my head around it.

This team is everything we hoped for, minus one Earl Thomas roughing call, and plus one Golden Tate hail mary. The defense did what it was supposed to do, and the offense became what we thought it might turn into sometime next season. Amongst my mostly confident thoughts though, I have a few concerns going into the game...

In this week's version of the timeless classic, Marcus Trufant is the little dweeb that's running around alleys trying not to get caught by the bullies, who are played by one guy, Santana Moss. I know this analogy seems stupid but hear me out.

Trufant is a terrible terribly old cornerback. He's allowed one of the best passer ratings in the league against while in slot coverage, and while he's not listed on an injury report, at that age you're never really "tip top" if you know what I mean. It's not really a stretch to say he's Bastian here.

Santana Moss is the bully here. Like the kid in The Neverending Story, any average guy could kick his ass, but against Trufant he's potentially overpowering. Trufant will need to find a dumpster to hide in for the duration of this game as the princess, and the 12th man depend on it. Hopefully you've watched The Neverending Story.

Hey Pete, chew on this!

Wait, what? It didn't say that last part, but if they'd known what kind of gum chewing maniac Pete Carroll is (he goes through TWO PACKS A GAME! KICK THE HABIT PETE!) they would have advertised more heavily to him I'm sure.

Seattle has gotten this far by following what has been a pattern of largely conservative decisions. There have been moments where Pete smacks his balls down on the table and screams "THEY'RE THE BIGGEST!" (paraphrasing - I think he sometimes yells "DOMINO M*THERF**KER!"), but by and large he's learned that his team is young, fast, and smart enough to outlast most other teams.

Leaving Russell Wilson and Steven Hauschka on the sideline in favor of Jon Ryan inside opponents territory has sometimes drawn the ire of Seattle fans and statistics-leaning analysts, but it has yielded good results in games where the talent on the Seahawk's sideline is simply greater than what the opposition has to offer. There's no doubt that Pete Carroll believes in his team, and believes that this is one of those weeks where that's the case; a steady eddy approach to this game should keep the Seahawks in the pole position throughout. Field position shall be key in this one, gentlemen.

Here's the thing: Pete can sometimes pull a crazy. Even last week, an onside kick (that I'll admit was well timed and hit St. Louis when they weren't expecting it) gave a struggling Rams' offense an opportunity to drive a short field and score, creating a tie that would last into the final minutes.

Mike Shanahan has been there and done that, and while I pretty much think he's a giant dick, he knows what he's doing. Pete will have to keep it in his pants, and if he does pull it out he damn well better make sure he doesn't end up in human resources on Monday.

This got graphic...and I think we're talking about me now... Moving on.

Old Spice should sponsor me, because I'm talking about the red zone

This is key everybody: the red zone.

When you're screaming and yelling at your screen Sunday afternoon, remember what I said: "The Seahawks will likely give up a ton of yardage, but don't expect the Redskins to be overly efficient in the red zone."

In their last three games the Seahawks are allowing touchdowns on only 42% of opponents red zone possessions, this is actually slightly lower the 44% they've been allowing for the year. Washington on the other hand is scoring touchdowns a ridiculous 82% of the time they get in close. Seattle is going to have to show them what it's like to feel the slow choking sensation that a shrinking field of play has to offer.

The Seahawks play more zone than I think any of us enjoy watching, but the style of zone they play, a kind of cover three where the corners basically fall as far back as a receiver takes them, becomes more effective in red zone situations. 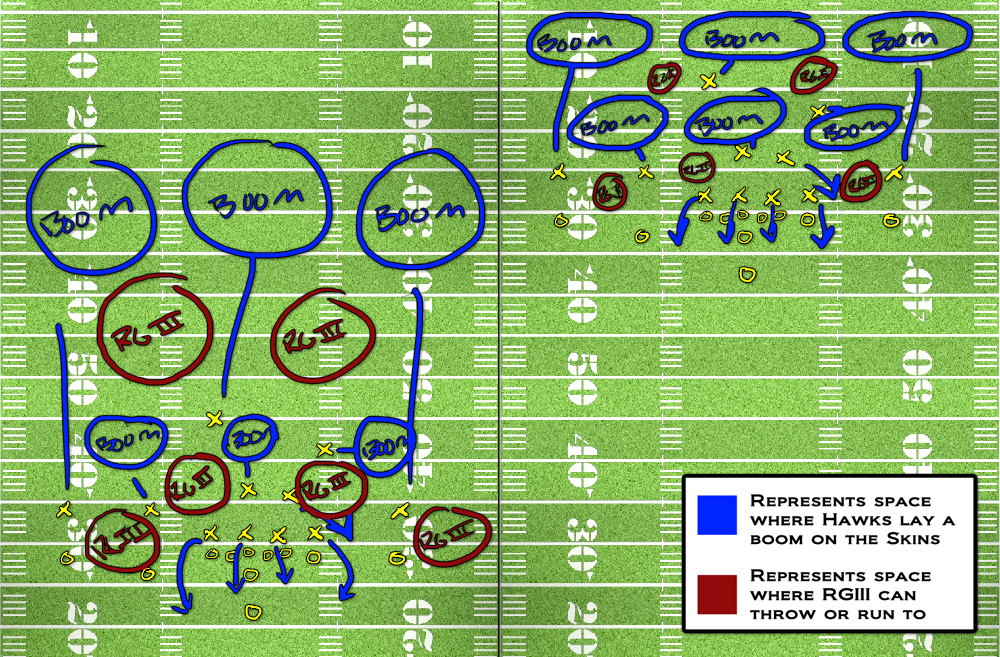 As you can see by my uber fancy diagram here, as the field tightens up, spaces for that weaselly little Robert Griffin to run to get so much tighter that it was actually almost impossible for me to write "RGIII" in the spaces at all!

I know I'm overly simplifying the concept here, and you're all probably well aware of the ways in which it is more difficult to play offense in the tight confines of a 1605 sq yd box. I just really wanted to pretend I was John Madden for a second.

The Seahawks have the kind of elite team speed on defense that lets them cover nearly every one of those 1605 square yards the redzone offers an offense, and frankly, the Redskins haven't seen that up to this point. They're in for a rude awakening.

This, of course, is only part of the story on defense. The Hawks need to limit red zone opportunities. They must...

Find a way to shut down Alfred Morris

If not for some outstanding play by a young and athletic linebacking corps, we'd all likely have a lot more to worry about. As it stands however, the defensive line has been so-so against the run this year.

Allowing 4.5 yards per attempt isn't awful by NFL standards but it's not what you'd expect to see from a defense that has shown that stopping the run has been one of it's biggest strengths in recent years. Morris has played so incredibly well this year, breaking nearly as many tackles as our own Marshawn Lynch, that it's hard for me to imagine at this point that he won't get his yards.

I imagine now that the Seahawks will try to turn it into something like the Vikings game, where Peterson was really the only opposing player that hurt them. Even by the standards of the hard-to-impress Danny Kelly, AP is a stud. The Redskins rookie is no AP, no one is, but it doesn't seem impossible that he won't end up looking like him here or there as he breaks a big run or two up the seam.

Brandon Mebane is the guy to watch, as he's been by far our best defender against the run up front.

But you best be believin' there will be moments where you have your doubts. It's the Playoffs, nothing is easy now.