Tell the Truth Monday: Some observations on the Seahawks' offensive identity

Share All sharing options for: Tell the Truth Monday: Some observations on the Seahawks' offensive identity

Tell the Truth Monday is going to morph from week to week. This week, it's going to be some general observations about the state of the team. I don't know yet whether this post will come off as negative or positive. Let's just find out!

First off, I've noticed a steady, glacial sea change in Seattle's running identity, and it dates back to last season and the advent of the read-option. The read-option is no longer a staple (not that it really ever was, but now it's very much just a curveball), and you know what? The wide zone doesn't really seem to be the identity of the run game anymore.

The Seahawks' run game is now, by my view, a three-headed monster - the tight/wide zone, the read-option, and a third element more predicated on running between the tackles from shotgun looks with atypical zone-blocking-scheme movement from the linemen. It's still technically a ZBS, I think, because a lot of the new stuff they're doing is still based on lateral movement by linemen (instead of powering straight ahead), but it's a different flavor that what we got used to the first couple of years under Carroll.

Instead of the standard ZBS sideline-to-sideline lateral movement with cut blocking on the backside, we now see slice blocking from tight ends, trap blocking and pulling of guards and tackles, and Seattle even threw in a draw play (of which they apparently ran zero times in 2012, per FO) against the Colts.

I feel like most of Seattle's 'explosive' runs have come from shotgun inside handoffs to Marshawn Lynch, where Lynch picks through the garbage, using his elite lateral agility, vision, and decisiveness to pick up yardage.

I've talked about this on Twitter, but the easiest way for me to make an analogy about this is the difference between a low-post post-up and a high-post entry pass to the elbow. At the elbow, (let's say it's Lebron), you can catch the ball, turn and face the basket, use your triple threat, and do any number of things - spin inside, fade outside, power up the middle right at your opponent, or fake one way and dart another.

This is the new face of the Seahawks' run game. The old game was a lob into the low post where you have a much smaller area within to move with your back to the basket, backing your defender down, you are more dependent on power rather than speed, and you're more reliant on throwing bows, and beating up on the opponent physically.

This is a read-option look with zone blocking up front, but it has that 'high-post' feel to it.

Pete Carroll has never seemed afraid to change strategy based on the personnel - for instance, they have finally acknowledged that Russell Wilson is a superior scrambling quarterback and they've not only accepted it, they've embraced it, now desirous to be the 'best scrambling team in the NFL'. Likewise, I think they've realized that with Lynch, you can get more explosive plays in these 'high-post' scenarios than in the standard 'lob into the low-post.' I mean, how much would we want LeBron James just posting up every time down the court. Get him the ball with some space and let him do work.

As a result - and I wish I had the numbers, but I don't - it seems like the Seahawks have evolved into more of a 'wide-open' team, eschewing the mainstay of heavy two tight end sets (partly because of Miller's injury) for more three-wide looks. It still looks weird to me from the endzone angle of Game Rewind when you see Seattle running with no tight ends on the line. It just looks weird. But it's way more common this year, it seems, and Lynch has benefitted from it. In what has seemed to be a little bit of a sloppy, inconsistent start to the year, Seattle's rushing numbers are strong.

Seattle has 8 runs of 20+ yards, which ties them for third in the NFL, and I'd like to see that number for runs of 12+ yards, which is what Carroll defines as explosive. I'd bet they're in the top-3 on that as well. Seattle is second only to the Eagles in yards per game on the ground, and their 4.6 YPA is among the league leaders.

Carroll is obsessed with explosive plays, and I think that he's realized that getting Lynch into space in the middle of the field is the name of the game. You'll get some stuffs at the line, but you'll also see Lynch strafe and jump-cut his way forward for 3, 4, 5 yards or more at a pretty consistent pace.

Lynch's 'elusive rating', which is a PFF Signature stat meant to capture a runner's success beyond the point of being helped by his blockers, is a robust 61.8, which is currently 2nd in the NFL behind only Adrian Peterson. Lynch leads the NFL in forced missed tackles with 29. This goes along with Carroll's belief in letting your playmakers make plays.

Along the same vein, Golden Tate is currently 2nd in the NFL among receivers in yards after the catch per reception with 8.2. Again, unsurprisingly, Russell Wilson is tied with Alex Smith for most runs as a quarterback with 27. Seattle wants their playmakers to make plays, wants to be anything but one-dimensional. I am expecting a lot of the same when Percy Harvin is back with the team. The wide zone not working? Use the shotgun, spread out looks to run. The passing game is clunky? Dial up YAC plays with Golden Tate (and Percy Harvin).

One area of consternation for myself and fans after watching this last game was that the slow-developing, deep play-action game has yet to really bear fruit for Wilson and the Seahawks. You'll see Wilson fake the handoff, roll out, and just keep rolling and rolling and rolling until he either scrambles for a modest gain or runs himself out of bounds or throws it away. I surmised that teams are scheming to take away this obvious weapon that Seattle possesses, and Pete Carroll acknowledged this morning that the Titans were playing their safety in what seemed to be 'miles deep' coverage. This means that Seattle must focus on their intermediate game, and they did manage to string together some New Orleans Saints'-esque quick passing in the 3rd quarter.

Take a look at this series of photos - all from the same drive in the 3rd quarter - in which Seattle went away from the deep, play-action style route concepts that they usually use, and implemented what I thought looked like a page out of Sean Payton's playbook.

21 personnel, but tight splits by the receivers with Luke Willson motioned to the tight slot. Used to get Willson in space and the receivers suck coverage their way. 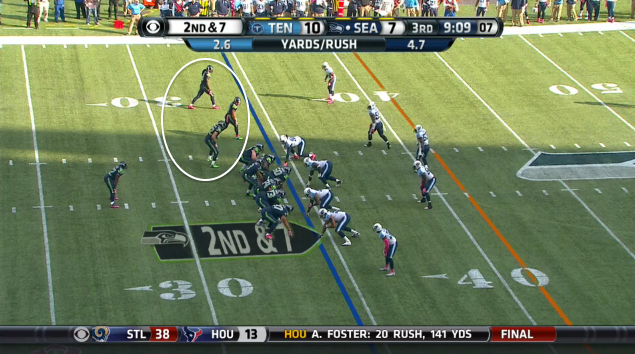 A bunch look (hallelujah), which works like a charm as Doug Baldwin settles in at the sticks and catches a first down pass. You've seen the Seahawks really struggle in press against this so it was fun to see Seattle send it back. 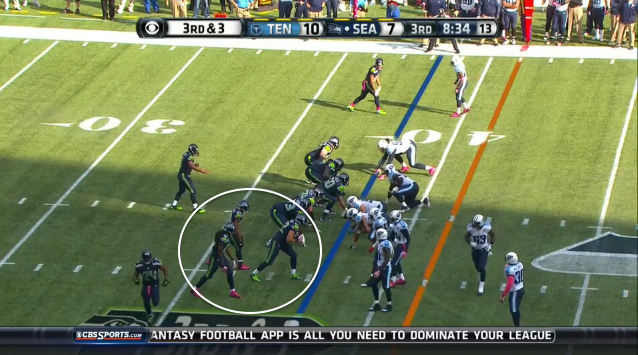 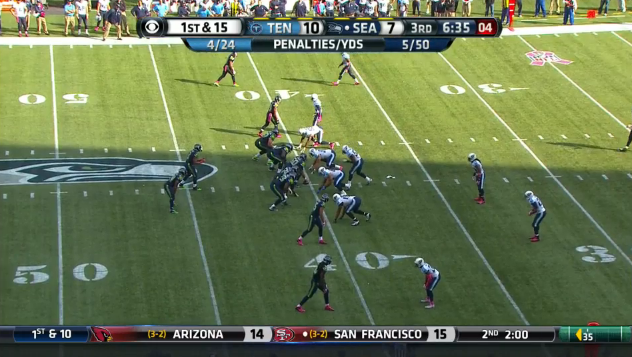 This is the New Orleans/Sean Payton special. Kearse gets open, Wilson hits him for a first down. 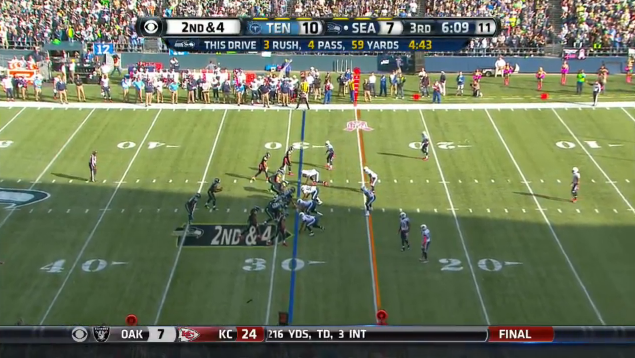 Back to spread 'em out. 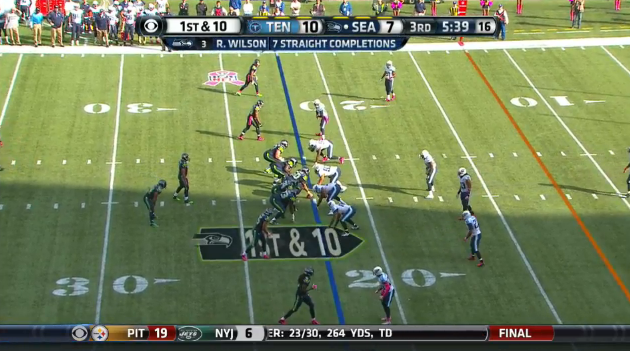 Here's an interesting no-back set on third down. 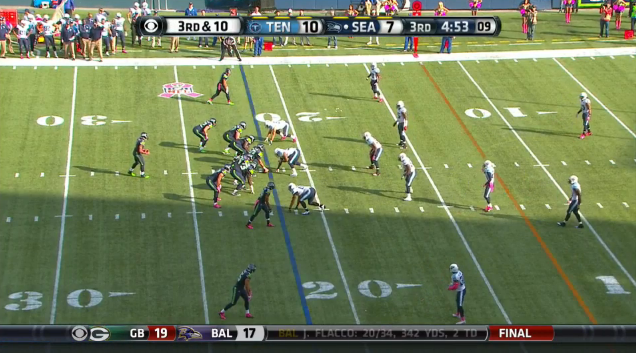 I'm not advocating that Seattle turns into a high-flying, spread offense, not at all, but it is nice to have some of these intermediate plays in your arsenal when teams are taking away everything over the top. Which they are. Because they looked at film from last year and saw how good Wilson was at these backbreaking bombs.

Seattle moved the ball well in this series and though they ended up short of a touchdown (they got a FG), it was super encouraging to see these types of formations and route concepts integrated into the offense. It keeps defenses off balance, it makes the account for these types of things, practice for them, etc. I've heard Greg Cosell mention that Seattle has very basic route combinations and have heard that Mike Holmgren mentioned the Seahawks have a 'predictable' passing game. Well, I don't know if that's intentional or not, but maybe that's something that can be fixed.

As Davis Hsu is pointing out on Twitter as I write this,

Russell Wilson has attacked short left (under 15 yards) only 36 times in 2012, the lowest in NFL, but attacked deep left 21 times (3rd highest in NFL). He is firmly bottom quartile in attempts, YPA and completion percentage to the short middle, and yes this is related to height & yes it relates to 3rd down.

Basically, Wilson, from looking at these charts - he is good to the deep left, deep right, short right, and not terribly effective short left & short middle. Conversely, Drew Brees is phenomenal in all areas - short and deep, left & right - and his "balance" to spread the ball is so good it looks fake. Brees has no strong tendencies or weaknesses left or right, short or deep or middle - from my view in 2012-2013 stats. He is elite.

Zero doubt Seattle (Pete Carroll and John Schneider) know exactly what Brees' historical "scatter charts" look like for his whole career and are keeping track of Wilson's scatter charts for his budding career - they know.

Yes. They know. And I have no doubt they study New Orleans' playbook, because they'd be stupid not to. Brees spreads the ball around in every sense of the word, and Wilson still has exploitable weak spots that teams scheme for. It's natural and expectable.

Anyway. Those are my thoughts. I saw what you saw. The offense looked clunky at times. We're still waiting for it to hit on all cylinders. The 3rd down percentage creeped up in this one (38%) and if Golden doesn't drop a slant route pass that went through his hands, it'd look a lot better. If Seattle doesn't get a holding call on James Carpenter on a Russell Wilson scramble, it looks a lot better.

Overall, I think that the bones are there and things are getting better, not getting worse, but there is still a lot of tinkering to do. On second viewing, I actually felt a lot better about everything than I did while watching it live. There are some exciting changes going on. Wilson is being forced to be more complete. He's being forced out of the pocket quickly and he's being forced to develop the intermediate range with teams scheming away the deep bombs. I'm legitimately excited to see how things develop on third downs and in this intermediate passing game. I'm guessing some of these bunch routes and spread looks will show up over the next few weeks.