It's 12:15 AM. Every late night host just got done with their monologues about the government shutdown. And the Seattle Seahawks are 4-0 for the first time in the franchise's 37-year history.

It's time for Week 4 of The Watch. Here we keep you up to date with the long term outlook of the season and the draft, as well as the short term prospects of next week's matchups.

Unfortunately, even though the Seahawks have carried an undefeated record further into the season than ever before, it wasn't enough to hang on to the #1 spot in the NFC Playoff seedings. The Saints, by virtue of their win over Miami on Monday night, have managed to take over the top spot with a Strength of Victory that's literally one win better than Seattle's. (Of course, that's likely to change once they start playing their division colleague Buccaneers a couple of times.) Elsewhere in the conference, the Detroit Lions have emerged as the leaders of the NFC North after their win over the Bears. And the NFC East continues to stink.

Here's the rundown on the NFC after four weeks of football: 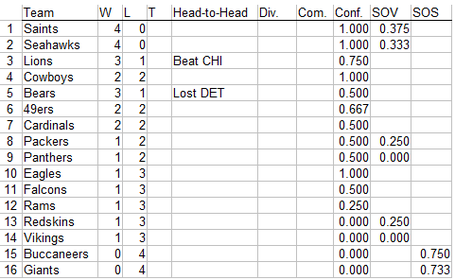 If the playoffs started next week, Seattle and San Francisco would be the only two teams that made the playoffs last year to qualify this season. The other four playoff teams have a combined record of 4-11. Eep.

There's still plenty of time for each of them to get back in the playoff picture, but for a couple of those teams - the Vikings leap immediately into mind - it might be time to start really looking at the draft order for 2014. Four teams have yet to win a game, and they all look pretty crummy so far - the race for the #1 pick might be an intriguing one indeed. Here's how the full draft standings look:

One thing to notice in those standings - Seattle has had the second easiest overall schedule so far, second only to the 3-1 Lions. That should change soon, however, with the 3-1 Colts and 3-1 Titans ahead on the schedule.

Which brings us to the last part of our column, where we take a look at Week 5's games. Next week features a fair amount of interconference contests, and we're starting to reach the point where the lower-eschelon teams can be considered lesser threats to our team's well-being than others. (Because seriously, we don't expect Tampa Bay to go on a 11-1 tear, do we?) So here's how we'd like the next slate of games to pan out (not counting the all-AFC tilts):

Jaguars (0-4) @ Rams (1-3)
This is one of those "low threat" games I was talking about, and that's great because Good Lord I don't think even the scoreboard will be watchable in this one. Uhh... Go Jaguars. Yeah, sure.

Texans (2-2) @ 49ers (2-2)
Howdy there, Houston. You guys must be pretty peeved after losing to the 'Hawks in overtime. We've been there before. I'll bet you want some revenge after that heartbreaker. Well, why not take it out on your next oppo- oh, hey! Look at that! You're playing the Niners on Sunday! Go Texans. Shred 'em.

Jets (2-2) @ Falcons (1-3)
The Jets are turning into the most hilarious 2-2 team in NFL history. Falcons aren't very scary right about now - they're currently ranked behind the Panthers, and I don't see them climbing over Carolina any time soon. Go Falcons.

Saints (4-0) @ Bears (3-1)
A Saints loss here gives the #1 seed in the conference back to the Seahawks, regardless how our game against the Colts shakes out. Go Bears!

Broncos (4-0) @ Cowboys (2-2)
Denver's looking downright scurry right now. Dallas doesn't really look like a team that can slow them down, but hey, maybe Peyton misses the team plane or something. Go Cowboys.

Eagles (1-3) @ Giants (0-4)
NFC East, ladies and gentlemen. Since the Giants seem to be a better organization (their horrible start notwithstanding), I'd rather they not draft too high. Go Giants.

On that note, time to put a bow on this week's installment of The Watch. The Seahawks are definitely in alien territory at this point, and a win against the Colts on Sunday would extend our franchise-record start to 5-0. Even if we lose, there's still a good chance at reclaiming the #1 seed in the conference, and it'll still only be the fifth time ever we've won four of our first five games. It'll be another 10 AM road test, but if last week's outcome was an indication, we may be able to stop worrying about those circumstances quite so much.