It's 11:30 PM. My roommates and I are playing King of Tokyo with MST3K playing in the background. And the Seattle Seahawks are 5-1 for the second time ever.

Well, folks, we got good news and we got bad news. The good news: on top of the fact that the Seahawks won, the Saints lost. That puts both teams at 5-1, essentially tied for the top spot in the NFC. The bad news: it takes four tiebreakers, but eventually the Saints still retain the #1 seeding.

In other news, the 49ers did a good enough job softening up the Cardinals that hopefully make them less of a threat as we travel to Phoenix on Thursday. The NFC North continues to be decent, and the NFC East continues to be mephitic. Carolina is still showing signs of life, while Atlanta's chances at the playoffs likely followed Julio Jones onto the Injured Reserve list.

Here's the overall standings of the NFC after six weeks of football: 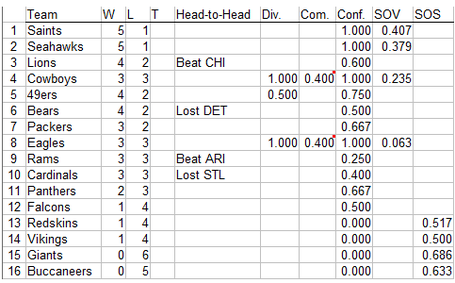 There are still quite a few tiebreakers in that bunch, especially in the middle of the standings, so here's exactly how all of those ties are broken.

1. The Saints and Seahawks are tied at the top of the standings with a 5-1 record. They haven't played each other yet, so skip that tiebreaker. They both have perfect conference records (SEA 2-0, NO 4-0 - both are considered a 1.000 percentage even though NO has played more games). They don't have four common opponents, so that tiebreaker doesn't apply. Strength of Victory finally does in the 'Hawks, as the total combined record of Atlanta, Tampa Bay, Chicago, Miami, and Arizona (11-16) is literally one loss better than the combined records of San Francisco, Houston, Jacksonville, Tennessee, and Carolina (11-17). It basically comes down to the fact that winless Tampa Bay has had their bye week already, but winless Jacksonville hasn't.

2. Detroit is considered the NFC North leader, having beaten Chicago head-to-head in Week 4.

3. The NFC East comes down to Dallas and Philly, both with 3-3 records and no head-to-head history yet. They're both undefeated in the division at 2-0. They have five common opponents - NY Giants, Washington, Denver, Kansas City, and San Diego - and both teams not only have the same 2-3 record against those opponents, they beat the same teams and lost to the same teams. Both are still perfect in the conference as well, at 3-0. But while the Cowboys' Strength of Victory is fairly weak at 4-13, it still handily beats the Eagles' anemic 1-15 SOV. That makes Dallas the NFC East leader, and grants them a #4 seed as a result of leading the division.

4. San Francisco and Chicago tie for the two Wild Card spots with a 4-2 record. They haven't played each other (nor will they), so the 49ers get the nod with a better conference record, 3-1 vs. 2-2.

5. Philadelphia, St. Louis, and Arizona all tie for 8th place in the conference with a 3-3 record. Division tiebreakers take precedence, and the Rams' win over the Cardinals puts them in front of that match-up. But the Eagles beat both of them with that perfect conference record, while the Rams' only conference win turns out to be against those Cardinals.

6. In the underachiever category, the Falcons are the highest-ranked 1-4 team because they're the only ones with a conference win. From there, strength of schedule comes into play, and the Redskins' 15-14 record is one win better than the Vikings, whose SOS is 14-14.

7. And in the dumpster fire category, the Giants are ranked ahead of the Buccaneers in the only category they can use - strength of schedule. The Giants' schedule is 24-11, while the Bucs have a 19-11 schedule because of their bye week.

As we mentioned last week, the fact that Seattle and New Orleans are tied for record is only going to matter until Week 13. Because the two teams will be playing each other that week, either team can overcome a one-game deficit over the other by winning that game. Unless one of them gains a two-game lead over the other (not likely) or a third team manages to tie them both and thwarts the head-to-head tiebreak, the Saints and Seahawks are likely to be in a dogfight right up to that matchup on December 2nd. (Happy birthday, Mom!)

Moving on to the draft picture, one team has dropped out of the winless category as the Steelers have finally got one in the win column. That drops them out of the top five in the draft order, and all the way down to seventh. The Giants keep hold of the #1 pick, and unless they beat the Vikings next week, that's not likely to change any time soon.
Here's a full rundown of the draft order thus far: 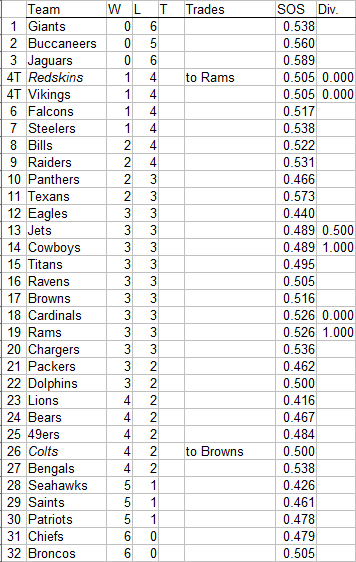 (Strength of schedule is found by totalling up the win-loss records of all 13 records on a team's schedule, with double weight given to divisional opponents. Ties are broken using divisional record; if a tie persists, a coin toss would serve as the final tiebreaker.)

Not much of a change from last week, aside from Pittsburgh falling out of the 0-fer category. The Giants continue to benefit from their division being so horrible, thus contributing 14 wins and 20 losses to their schedule, while Tampa Bay's division provides 16 wins and 16 losses, and the Jaguars have 18 wins and 18 losses from the AFC South. New York's pretty much going to have to win a game for either of them to get a sniff at the Jadeveon Clowney sweepstakes.

And now we move on to next week. Since the game between the Seahawks and Cardinals will be on Thursday night, it gets our game out of the way and lets us watch the Sunday games knowing fully well the ramifications of each game. But since Seattle is at 5-1 and in second place in the conference, not many teams pose a direct threat to our situation. Only a handful of games are really going to affect the team this week, especially since New Orleans is on their bye this week. And honestly, the fewer of these bystander games there are, the better shape the 'Hawks are in. On that note, here are the games to pay attention to on Sunday:

Sunday morning: Buccaneers (0-5) @ Falcons (1-4)
I feel like I'm giving Atlanta way too much credit for even putting this game in the article, but everyone was so petrified of them in the early goings of the season that it's kind of fun to watch them spiral downward. And while we want a demoralized Tampa Bay team making the long flight to the CLink on Week 9, we don't necessarily want one that's hungry for their first win. Go Bucs.

Sunday morning: Bengals (4-2) @ Lions (4-2)
I mentioned this last week, but the best thing we could see is the NFC North being a knock-down drag-out division where none of the three teams in the running for the division title gets too far in front of the other. That means losing interconference games like this one. Go Bengals.

Sunday morning: Bears (4-2) @ Redskins (1-4)
There's regressing to the mean, and then there's the Redskins. Again, following the narrative above we want Washington to win, as unlikely as it appears to be right now. Go Redskins.

Sunday afternoon: 49ers (4-2) @ Titans (3-3)
That one game lead that the Seahawks hold over the 49ers is the Week 2 win over the 49ers. It would really help if San Francisco would lose a game against a team that we've already beaten. Go Titans.

The other two games featuring NFC teams (DAL @ PHI, MIN @ NYG) have little to no bearing on our situation, so feel free to root for whichever team has more of your fantasy players.

Next week is a chance at franchise history once again: if the Seahawks win, it will be their first-ever 6-1 start. With a short week, and many players still banged up, another road divisional game on the horizon, and an idle rival at the top of the conference, this could be one of the more important games of the season. Will the Seahawks regain the inside track for home field advantage, or will they lose their one-game lead in the division? Regardless, this is going to be a very interesting and telling week for Seahawks fans. Hopefully the good news will continue when we meet again next week.

'Til then, GO HAWKS!