It's 11:16 PM. The single worst game of the NFL season just aired on primetime. And the Seattle Seahawks are 6-1 for the first time ever.

It's time for Week 8 of The Watch.

And boy, was this a productive week around the league. Thanks to the Saints having the week off, Seattle had the opportunity to seize the top spot in the conference with a win over the Cardinals that feels like it happened back in August. That half-game lead over New Orleans gives the team control over its own destiny for home field advantage throughout the playoffs right up through the Week 13 confrontation with said Saints. Meanwhile, the Jaguars are finally right where they belong - at the bottom of the league, and on top of the draft board, thanks in no small part to the Giants finally getting in the win column. Injuries have hit several teams hard, including a team that was vying for the NFC North crown and the division rival that the Seahawks will be playing next Monday.

(I don't know about you, but October 28th cannot get here fast enough.)

Seeing as we're now almost halfway through the season, it's time to introduce the Red Line of Doom to the NFC Standings, to better illustrate where teams are and how far away they are from the playoff picture. Fortunately, the results of the past week have done away with many of the tiebreakers that were causing such a traffic jam in Week 6. Here's where all the NFC teams rank after seven weeks of the season: 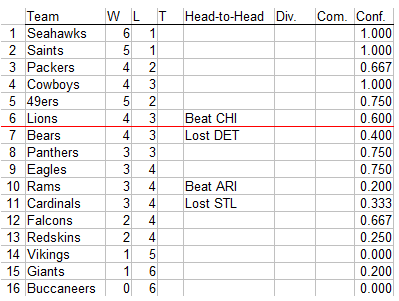 There are still a couple of ties in the rankings which actually persist from last week, but here's a quick reminder:

1. The Lions and Bears tie for the 6th and final playoff spot with a 4-3 record, but the Week 4 win by Detroit over Chicago gives them the tiebreaker.

2. The Eagles, Rams, and Cardinals all tie for the #9 ranking with a 3-4 record. The situation plays out exactly the same as last week: Rams get the head-to-head tiebreak over the Cardinals first because division tiebreaks are handled first. From there, Philadelphia outranks both NFC West teams in conference record, 3-1 (PHI) vs. 1-4 (STL) and 1-2 (ARI).

The Saints trail by half a game in the standings, but I'm quick to remind everyone that they can be as far back as a full game and still be in contention for the top spot by the time Seattle hosts them. Meanwhile, the 49ers remain just one game behind us in the standings, so the pressure to keep winning is still very much on for the Seahawks. Chicago has fallen out of the playoff tier, and with their injury to Jay Cutler we might see them drop even further in the standings before they recover. And with a cumulative record of 10-20, the NFC East continues to be the nadir of the conference.

Speaking of nadirs, the Jacksonville Jaguars finally had a break go their way. The win on Monday Night by the Giants leaves just two winless teams in the league: Jacksonville, and their fellow statesmen the Buccaneers. Jacksonville's cumulative record of 62-49 leaves them just three thousandths of a percent ahead of Tampa Bay's 59-46 record for the weakest record of the 0-fers. Things may change as the bye weeks continue to sort themselves out, but for now the Jaguars are in the #1 draft spot for 2014. The Redskins have now fallen out of the top 5, as well, thanks to their shootout win over the Bears. Here's the full draft order as of Week 7: 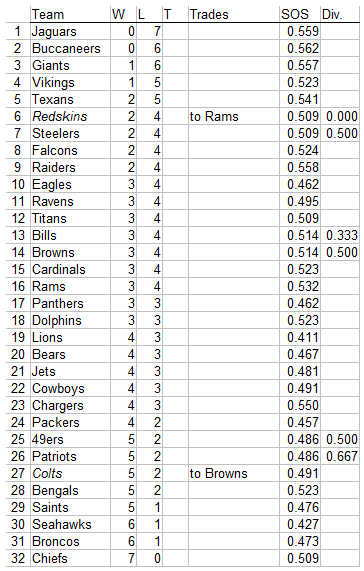 (Strength of schedule is found by totalling up the win-loss records of all 13 opponents on a team's schedule, with double weight given to divisional opponents. Ties are broken by the weakest divisional record, with a coin toss breaking any remaining ties.)

With the trade deadline looming and many teams suffering some serious injury losses, we may see that trade column fill up a little more, as teams that are essentially out of the running might sell off some pieces for draft picks to teams that need to plug some holes in order to make a playoff push.

And now for the fun part: who to root for next week. In Week 6, the Seahawks played first, giving us a chance to make our own move before watching what the rest of the league does. Now the opposite is happening: everyone else gets to play first, allowing us to see how the rest of the league shakes out before getting our own chance to perform. Two games on the schedule are of obvious importance, but here's how we want all of the contests next week to turn out (ignoring AFC-only matchups):

Thursday: Panthers (3-3) @ Buccaneers (0-6)
Seattle already has a two-game lead AND a head-to-head victory over Carolina just in case it ever comes to these two teams being tied for anything, so a win by the Panthers doesn't really scare us. Then again, this would be the last chance for the Bucs to pick up a win before they make their cross-country trip to the CLink. I don't think they'll pull it off, but a team coming off their first win in seven tries just feels less threatening than a team still looking for its first win. Go Bucs.

Sunday morning: Cowboys (4-3) @ Lions (4-3)
The more parity below us in the standings, the better. Seeing as one team is a division leader and the other is a Wild Card (albeit by only half a game), it seems more beneficial for the wild card to get the victory here. Besides, the worse off the NFC East leader is, the more entertaining it is for the rest of us. Go Lions.

Sunday morning: Bills (3-4) @ Saints (5-1)
The Seahawks at this point control their own destiny for home field advantage, but that doesn't mean the teams that rank directly under us can't trip up a bit. Go Bills.

Sunday morning: Giants (1-6) @ Eagles (3-4)
A completely unthreatening game for us standings-wise. I feel like the stinkier the NFC East gets as a whole, the better off we'll all be. Just don't let this game be as much of a diaper as the one we saw on Monday night. Go Giants.

Sunday morning: 49ers (5-2) vs. Jaguars (0-7), in London
The only hope we have is that the extra 3 or so hours of jetlag that the Niners suffer from their Transatlantic flight causes them to play down to Jacksonville's level. Because honestly, unless SF has a divisional hiccup or two, I'm not really seeing any obvious losses on their schedule except maybe Week 11 at New Orleans. Hopefully they'll drop at least one game before then. Go Jaguars. Pleeeeeeeease.

Sunday afternoon: Redskins (2-4) @ Broncos (6-1)
This game has little bearing on our situation aside from ego stroking: another Denver loss likely drops them further in the various Power Rankings out there; another Washington loss further widens the gap of success between RG3 and DangerRuss. Neither outcome really matters in the long run, so take your pick. Personally, I'm saying Go 'Skins, only because seeing Seattle ranked in the top 3 each Tuesday morning gives me warm fuzzies.

Sunday night: Packers (4-2) @ Vikings (1-5)
I wish there was a way to parodize Fiddler on the Roof's "Tradition" into "Attrition" without it just looking like the word's being chanted six times. Curse you, one-word choruses!

If there's a division we want more attrition in than the NFC East, it's the NFC North, just to give us a better chance at a first-round bye even if home field slips through our fingers. Though the Bears are likely to drop out of the division race because of the injury to Jay Cutler, we still want a dogfight between Green Bay and Detroit. Go Vikings.

That'll do it for Week 8 of The Watch. Our team is peforming about as good record-wise as we could have hoped as we approach the midpoint of the season. Yeah, the Colts snuck up on us and we certainly have had some weak showings during a couple of the wins, but as this team slowly gets healthier (especially on the offensive line) we could potentially see a winning streak matching the caliber of 2005 if things continue to progress in this manner. I'll see you guys next Tuesday.