It's 1:15 AM. I just got back from a wedding that began with dancing flappers and ended with an original musical number by one of the grooms complete with backup dancers. And the Seattle Seahawks, perhaps despite themselves, are 7-1.

Well, that game last night against the Rams was... a game. Seattle certainly didn't acquit themselves very well during that game, with an offensive line that made the turnstiles I passed through this weekend in New York look like obstinate barricades, and a defense that got gashed for 200 rushing yards. But they won, and when the season ends on Dec. 29, that win is going to count for just as much as that 29-3 shellacking of the 49ers. Yes, the team has not looked like a Super Bowl contender the past few weeks, but as long as they finish sixty minutes of play with a higher score than their opponent, they will continue to win games - and in the NFL, that's all that matters.

And while the Seahawks look to drop in all of the pundits' power rankings, they still rank as the #1 team in the NFC thanks to that 7-1 record. Here's how the standings look after Week 8: 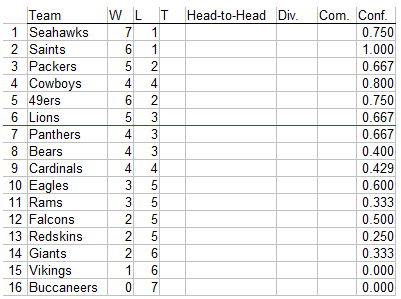 All three tiebreakers (CAR vs. CHI, PHI vs. STL, ATL vs. WAS) are broken using conference record.

The Seahawks are still half a game in front of the Saints and a full game ahead of the 49ers (with a head-to-head tiebreak) for the top spot in the conference. The Packers, who have earned a spot at the table with their NFC North-leading 5-2 record, are a game and a half back. With the season essentially half over, it's time to start looking at the teams in the NFC that are looking at more than just a playoff berth, but one that gives them at least a week off if not a pair of home games in January. With that in mind, let's take a look at the top four teams in the NFC, and what sort of road they have in front of them.

As you can see, the Seahawks are enjoying not just the best record in the NFC, but the easiest schedule of the four top teams in terms of both strength of schedule and DVOA. The Saints, on the other hand, face the toughest schedule - due in no small part that they have two divisional games remaining against the Panthers, who rank sixth in the league in DVOA.

It also helps that the Saints and 49ers will play each other on Week 11, so one of those two teams is going to have to pick up another loss by the time we face either one of them. This should allay some fears that neither New Orleans nor San Francisco is doing us any favors by not losing any of their games (and winning them handily at that). Now, the Seahawks are going to have to keep winning for all of this to matter, but it's definitely a good thing to know that not only do they control their destiny, but it's one that's easier to control than what other teams have to contend with.

From here, we go from the top to the bottom. We still have two winless teams - the aimless Buccaneers and the just plain bad Jaguars. Unless one of them picks up a win between now and Week 17, we're likely to see a dogfight between the two of them in terms of their strength of schedule. Last week, the Jaguars were one loss in front of the Bucs; Tampa Bay now has that one-loss advantage after this week. As for the other 30 teams in the league, here's where they are in the draft order: 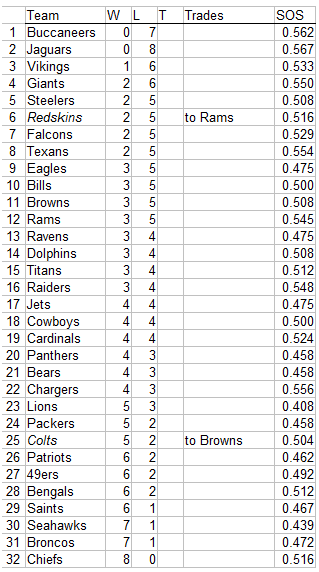 (Strength of Schedule is found by totalling the win-loss record of all 13 opponents on a team's record, with double weight given to divisional opponents. Ties are broken using divisional record, with a coin flip breaking any ties that remain.)

The 49ers are on a bye this week, so that's one less team that we're going to be focusing on. (And given how they've been completely uncooperative as of late, it's probably for the best.) That said, here are the matchups to keep an eye on for Week 9, and how we as a fanbase would like them to fall:

Sunday morning: Vikings (1-6) @ Cowboys (4-4)
Picking this matchup has little to do with the Seahawks and more to do with plain ol' Schadenfreude. If the Cowboys lose again, it means that the NFC East leader will have a sub-.500 record more than halfway into their season. While that would require them to lose at home to the Vikings (who've been outscored 67-38 the past two weeks, both games in prime time), it would still be hilarious to watch the Cowboys implode. Again. Go Vikings.

Sunday morning: Titans (3-4) @ Rams (3-5)
With the Rams comfortably four games behind us in the standings and one win against them already, the issue becomes less about threat and more about draft prospects. The Rams are going to have two picks in the first round next year; the goal now is to keep those picks as low as possible. Go Rams.

Sunday morning: Saints (6-1) @ Jets (4-4)
So far in this season, the Jets have alternated between wins and losses each week. If the pattern holds, it'll give us slightly more breathing room against a Saints team that just doesn't want to go away. Go Jets.

Sunday morning: Chargers (4-3) @ Redskins (2-5)
Hope springs eternal for every NFC East team, who are all within two games of each other. With the Rams owning Washington's first-round pick next year, we once again want that pick to be as far away from the top as possible. Go Redskins.

Sunday morning: Falcons (2-5) @ Carolina (4-3)
There is still a faction of fans out there who are not going to be comfortable about the Falcons until Week 10 is over and the team is completely in our rear view mirror, hopefully (and presumably) out of the playoff picture at that point. But as I'm a proponent of maximizing attrition outside the division, I'm once again going to pick the team that's the source of many nightmares out there. Go Falcons. (Don't worry, Panthers fans; you'll see me jump on your bandwagon very soon.)

Sunday afternoon: Eagles (3-5) @ Raiders (3-4)
For no better reason than I want the NFC East to be a competitive division, albeit a very bad one. Go Eagles.

Monday night: Bears (4-3) @ Packers (5-2)
Granted, they were playing against a very weak Minnesota defense, but the Packers are a team that we should start paying some attention to. A loss by the Packers would not only throw them in a three-team tie for the NFC North lead with Chicago and Detroit (which the Lions would emerge from with the lead due to division record), but also put another game between them and the top two teams in the conference, and thus the first-round bye. Go Bears.

Next week gives the Seahawks some much-needed home cooking, against the aforementioned Buccaneers who are amazingly still employing Greg Schiano. I don't expect our offensive line issues to be magically cured by Sunday (especially since Okung is still on IR and Breno doesn't look to be ready by then, but hey, if we can't win a home game against a winless opponent that's literally making the longest domestic flight in the NFL, then maybe we need to rethink our prospects anyway. A win puts us at 8-1, setting yet another "best start" franchise milestone - no matter how ugly that win may be.