It's 10:16 PM. Los Angeles is going bonkers over their NLDS win over the Braves. The newly-designed $100 bill will begin circulation on Tuesday. And the Seattle Seahawks have suffered their first loss of the season.

It's Week 5 of The Watch, and some might say that the season has officially begun.

Why's that? Well, after a miracle win in Houston that sent the team to its first ever 4-0 start, spirits have been tempered somewhat by the loss to the Colts. And not just the fact that we lost, but how we lost - the occasional lapses in execution and concentration outweighed the otherwise strong performance that the Seahawks team had put together in its third 10 AM road game of the year (and of which there are still two more). It also means that the quest for Home Field Advantage has been shaken up a bit.

Try as they might, the Chicago Bears were unable to slow down the Saints at home, and New Orleans now has sole possession of the top spot in the conference standings. Seattle is still sitting relatively pretty at 4-1, but there are plenty of barbarians at the gate. Not the least of which are the resurgent 49ers, who overcame their slow start to the season to rattle off two convincing wins in a row; and the Cardinals, who have also somehow managed to stumble into a 3-2 record. Obviously, one team frightens us more than the other, but records are records. In other news, the Falcons - yep, the same Falcons that seemingly every watcher is deathly afraid of - fell to a dismal 1-4 record after losing yet another close one to the Jets, and the NFC East continues to put our 2010 division race to shame.

Here's the rundown of the NFC after five weeks of football games: 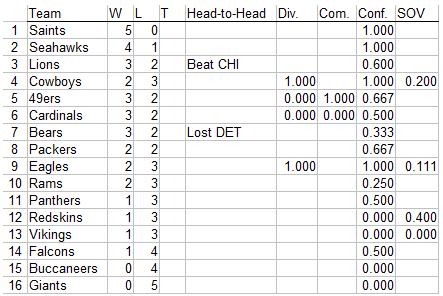 There's more of a logjam now than there has been in previous weeks. So here's a quick explanation on why the teams are ranked where they're ranked:

1) The Lions beat the Bears head-to-head, which breaks that tie and gives Detroit the division lead.

2) The Cowboys and Eagles have yet to play each other, and are both perfect in division play (DAL 1-0, PHI 2-0). Both teams have only played against one common opponent - the Giants - and both won. They're also both perfect in conference play (DAL 2-0, PHI 2-0). It goes all the way to Strength of Victory, and the Cowboys have beaten the Giants (0-5) and the Rams (2-3), which betters the Eagles' wins over the Giants (0-5) and the Redskins (1-3). This means Dallas has the lead in the division, which grants them the #4 seed since division champs will ultimately get seeded above Wild Card teams regardless of record.

3) The 49ers, Cardinals, and Bears are tied with 3-2 records. Division takes precedence, and while the 49ers and Cardinals have yet to face each other and both sport 0-fer division records, the 49ers beat the Rams while the Cardinals lost to them. Hence, San Francisco breaks that tie, and their superior conference record over Chicago (2-1 vs. 1-2) gives them the #5 seed. Arizona has a 2-2 conference record, again better than the Bears, so they get #6 while Chicago has to settle for the #7 ranking.

5) Kinda silly to go any further at this point, but the Panthers, Redskins, and Vikings all have 1-3 records. Panthers go to the top of the list because of a 1-1 conference record (the other two teams have 0-fers). Redskins beat out the Vikings on Strength of Victory, as Washington has beaten a 2-3 Oakland squad while the only win the Vikings have is against the winless Steelers.

6) Technically, the Buccaneers and Giants are tied on winning percentage, but who gives a crap about winless teams.(The Bucs would break the tie on SOS anyway, .551 against .500.)

Back to the Seahawks' playoff picture. We all have visions of HFA dancing in our heads - especially since whoever's in charge of scheduling loves to throw the team into a Saturday 10AM road game any opportunity they get - and right now it looks like they're trailing the Saints by one game. But in actuality, the Saints and Seahawks are still in essence "tied" for the right to host all their playoff games. In fact, even if the Seahawks had won on Sunday and the Saints lost, we still would in essence be "tied". How's that, you ask?

Look at the schedule. Week 13. Saints at Seahawks.

Even if one team holds a one-game lead over the other, that game serves as an equalizer. Assuming for the sake of argument that the Saints maintain that lead over the Seahawks up until the game in question, a Seahawk win would draw both teams even - at which point Seattle would win the higher rank due to the head-to-head victory. Conversely, if the Seahawks had the one-game lead and the Saints won, same thing: both teams would tie for record, and the head-to-head tiebreak would go to the Saints.

Of course, this also assumes that a third team doesn't potentially crash the party and tie with both Seattle and New Orleans. The head-to-head tiebreaker with more than two teams only applies if one team swept the other opponents, or got swept. Unless the Seahawks beat that team as well (which means they'd have to have played that team at some point), head-to-head would be skipped as a tiebreaker.

If that sounds a little dizzying to you, here's the quick-and-dirty synopsis: unless either Seattle or New Orleans gets a two-game lead over the other or a third team ties with both of them, Week 13 is pretty much the sole deciding factor for who gets ranked over the other.

So now that your brains have turned into salted caramel pudding, here's something far less confusing: the current draft rankings. 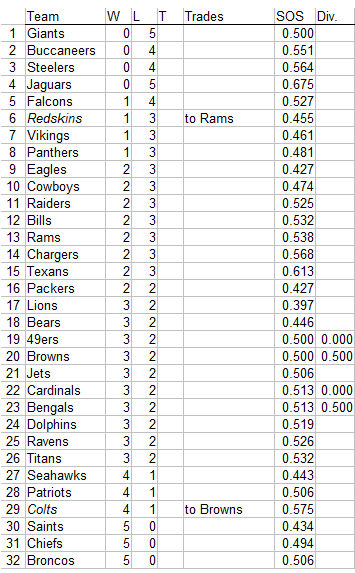 (Strength of Schedule is determined using all 13 opponents on a team's schedule, including games not yet played. If a tie persists, divisional record is used, followed by a coin flip.)

Everyone is pretty much in agreement that the Jaguars are the worst team in the league right now. But sadly, it's going to be very tough for them to get the #1 pick. Their schedule is clearly working against them right now: their schedule includes the two strongest divisions in both conferences, the AFC West (14-6) and the NFC West (12-8). Their division leader is the Colts, who add 8 wins and just 2 losses to their SOS, and their other two opponents - Cleveland and Miami - are both 3-2 right now. Meanwhile, not only do the Giants stink with an 0-5 record, but their division rivals have combined record of 5-9, which means 10 wins and 18 losses go into their SOS calculation. While they also face the NFC West, their remaining opponents - the AFC North, Seattle and Carolina - combine for a total record of 14-14. In other words, the Giants are at the top of the draft list because not only do they stink, but their competition for the most part stinks as well.

And now, we turn our attention to next week. Once again, some teams are of more concern to us than others, and the rooting interests will reflect that. On that note, here are the significant games on the schedule for Week 6, and who better serves the Seahawks' interests (games played exclusively within the AFC are omitted):

Thursday Night: Bears (3-2) @ Giants (0-5)
With the Bears only one game behind us in the standings, they're more of an issue. Can New York finally get a handle on their O-line and pass rush woes? For our sake, let's hope so. Go Giants.

Sunday Morning: Lions (3-2) @ Browns (3-2)
Detroit's cooled off a bit after their hot start, but figure one more loss to keep them on their heels. I doubt the NFC North is going to send three teams to the postseason, though, and figure at least one of the triumvirate between Green Bay, Detroit, and Chicago to be on the outside looking in at the end of it all. Go Browns.

Sunday Morning: Panthers (1-3) @ Vikings (1-3)
The Panthers are one of the league's biggest underachievers this year. But since they're more likely to snag a playoff spot than Minnesota, Go Vikings.

Sunday Morning: Eagles (2-3) @ Buccaneers (0-4)
We don't play the Eagles this year, and don't figure to be a threat in the standings. Meanwhile, the more demoralized Tampa Bay gets before our Week 9 matchup, the better. Go Eagles.

Sunday Morning: Packers (2-2) @ Ravens (3-2)
Again, someone's going to have to win the NFC North, but that doesn't mean they have to do it with a great record. Go Ravens.

Sunday Morning: Rams (2-3) @ Texans (2-3)
Only because they're the divisional opponent - but after seeing the egg Houston laid on Sunday night, I think they're beginning to unravel. Hopefully they can get it back together long enough to keep the Rams in the cellar. Go Texans.

Sunday Afternoon: Saints (5-0) @ Patriots (4-1)
Last year, a Patriots rally that fell just short was the ultimate factor in deciding the NFC West. Here's their chance to atone. While tying for conference record may not mean much, it certainly would look nice. Go Patriots.

Sunday Afternoon: Cardinals (3-2) @ 49ers (3-2)
The great thing about where the Seahawks are in the season right now is even though two division rivals trail them by just a game, only one team at most could catch them even if Seattle loses. Of course, there's another potential outcome, one that would not only keep a tie for the division lead out of either team's reach, but be pretty fucking hilarious in the process. And the best part is, it happened last year. Go Tie!

What? That's not realistic, you say? Fine then. Obviously, one team's 3-2 record seems a lot more threatening than the other team's 3-2 record. Hint: which team has Carson Palmer under center? That's the one I'm less scared of. Go Cards.

Sunday Night: Redskins (1-3) @ Cowboys (2-3)
I'm all for the NFC East being as putrid as possible this year. While I picked the Eagles in the earlier contest, an Eagles loss and a Redskins win would be really fun. Go Redskins.

Finally, a quick comparison of the team's playoff chances based on previous seasons.

In other words, a loss on Sunday wouldn't be a huge blow to the Seahawks' playoff chances compared to the past, but it would complicate the goal of HFA and would certainly be demoralizing, especially considering how many people out there are looking at the game against a banged-up Titans team as an automatic win.

That'll do it for The Watch this week. Let me know if you like the new stuff (like the historical comparisons), and of course feel free to agree or disagree with the rooting guide. I'll see you guys next Tuesday.