It's 10:00 PM. I just got out of bed five hours ago after playing video games 24 hours straight for charity. And the Seattle Seahawks are 9-1.

Well, this past Sunday went about as swimmingly as one could have reasonably hoped. The Seahawks won in convincing fashion, against the opponent that sent them home from the playoffs last season to boot. The Panthers managed to stifle the 49ers and hand our division rival their third loss of the year. Put them together and you've got a 2 1/2 game lead on the NFC West with the season nearly two-thirds over. The only way things could have worked out even better is if Dallas hadn't turned in a performance characteristic of a division-leading .500 team against the Saints. But seeing as the Saints still have two games against the Panthers - who are just one game back in the NFC South - I think it's fair to say that it we aren't terribly worried about the Saints beating the Cowboys.

Indeed, this was one of the first weeks of the year that we as a fanbase were able to breathe a little sigh of relief. After a six-week stretch where the Seahawks twice needed overtime to beat teams with a combined record of 2-16, and had major injury issues in the offensive line and fluky plays that turned field goal attempts into touchdowns for the opposing team, Week 10 could be a turning point in the season. Things are finally beginning to shake out in our favor.

Elsewhere in the conference, the Detroit Lions have wrested control of the NFC North from the Bears and Packers, as their win against Chicago, coupled with the Packers losing to the Eagles, gives Detroit a one-game lead in the division. The Panthers have leapt into the playoff picture thanks to their victory over the 49ers - they now have the #5 seed over said Niners - and the NFC East continues to entertain us all with their C- caliber football. Here's how the conference looks after ten weeks of football: 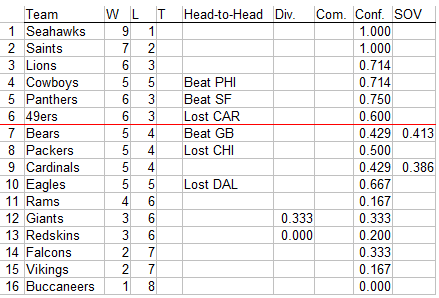 Here's how the tiebreakers and the playoff seeding shakes out:

1. Dallas and Philadelphia tie for the NFC East lead with a 5-5 record (snerk). Dallas earns the tie break on account of their head-to-head win against the Eagles in Week 7, and are granted the 4th seed.

2. Carolina and San Francisco tie for the two Wild Cards with a 6-3 record, which Carolina promptly breaks due to their win over the 49ers this past Sunday.

3. The Bears, Packers, and Cardinals all tie for the #7 ranking in the conference with 5-4 record. Division tiebreakers are handled first, and the Bears' Week 9 win over the Packers puts them above their division rival. From there, both Chicago and Arizona tie for conference record at 3-4, and since they do not share the minimum four common opponents yet (both teams have yet to play Philadelphia, their fourth shared opponent), that tiebreaker is ignored. Thus, Strength of Victory is used to break the tie, with the Bears' 19-27 SOV beating the Cardinals' at 17-28. Since the Packers' 3-3 conference record beats the Cardinals, the Packers get the #8 spot while Arizona is left with #9.

4. The Giants and Redskins tie for 12th in the conference with a 3-6 ranking, which the Giants win because of conference record, 1-2 vs. 0-3.

5. Atlanta and Minnesota are tied for 14th in the conference at 2-7. Atlanta's 2-4 conference record beats out Minnesota's 1-5 record, earning it the tiebreak.

No team has officially clinched a playoff spot or been eliminated from postseason contention yet. Yes, even the 1-8 Buccaneers could still mathematically snag a playoff berth if they win out, and the two games between the Saints and Panthers involve one Carolina win and one tie. If that sounds little far-fetched, maybe their quest for the #1 draft pick might be more tangible right now. Of course, they had that first pick in the palm of their hands, but gave it up after their victory over the freefalling Dolphins on Monday night.

Jacksonville is now in the driver's seat for the top pick despite their first foray into the win column on Sunday; the emergence of Carolina as a potential playoff team has made Tampa Bay's schedule much stronger than the Jaguars. The Jags would essentially have to win a second game in order for the Bucs to reclaim control of their draft destiny. In other news, the Rams winning combined with the Redskins losing means that both first-round picks controlled by St. Louis are right next to each other in the draft order. (I'll leave it to much smarter people to let you know whether there's an inherent advantage to having two first-round picks back to back.)

As for the rest of the draft order: 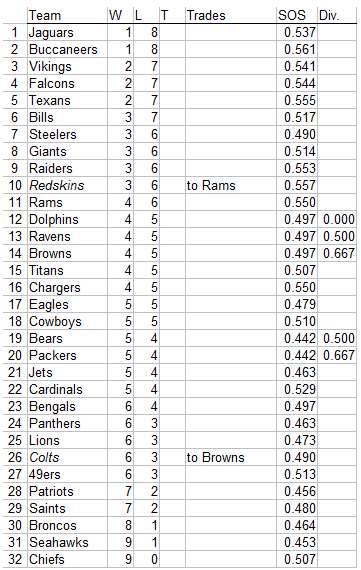 (Strength of schedule is found by totalling the win-loss records of all 13 opponents on a team's schedule, with double weight given to divisional opponents. Division record breaks any ties; a coin flip breaks a tie in that category.)

This is typically the part of The Watch were we go over next week's games, and try to figure out which results would most benefit the Seahawks going forward. But the truth is, after the week that we've just had, there's enough separation now between Seattle and most other teams that the bulk of the schedule right now is of lessened consequence.

Granted, we haven't clinched a playoff spot yet, much less a first-round bye or homefield advantage, and there's always the chance of the Seahawks going into a tailspin that leaves them with a 9-7 record to end the season. Just like there's a chance that Tampa Bay can win the NFC South. There's one game on the schedule this week that's of huge importance: the rest is pretty much rooting for frosting.

Sunday afternoon: 49ers (6-3) at Saints (7-2)
The interesting thing about this game is that both outcomes can benefit or hurt the Seahawks. If the Niners win, it sends the Saints down to 7-3, yielding yet another half-game to the 'Hawks in the standings for homefield advantage. If the Saints win, San Francisco falls to 6-4, and depending on what happens between now and Week 14 when the Seahawks travel to Candlestick, it could make that game a division-clinching opportunity.

This is one where arguments could be made to root either way, but I'm inclined to say Go Saints here. Winning the division is a priority over seeding, so that business needs to be taken care of first. Besides, with New Orleans still having two games against the Panthers on their schedule, there is still plenty of opportunity for the Saints to drop one more game (and I'm not even including Week 13, when they come to the CLink.)

As for the remaining games on the schedule, their impact on the Seahawks will be pretty minimal, but in case you want to have an investment in each game that doesn't involve fantasy teams, survivor pools or actual gambling, here you go:

Sunday morning: Ravens (4-5) @ Bears (5-4)
The Bears are a team I wouldn't be scared of in the playoffs, certainly not if they have to travel over here to play that game. Let's keep them in the mix. Go Bears.

Sunday morning: Redskins (3-6) @ Eagles (5-5)
For draft considerations more than anything else, Go Redskins.

Sunday morning: Lions (6-3) @ Steelers (3-6)
Detroit is 2 1/2 games behind Seattle in the playoff seeding, so it's not a life-or-death situation, but I've been preaching parity in the NFC North and I'm not about to stop now. Go Other Team.

Sunday morning: Cardinals (5-4) @ Jaguars (1-8)
After seeing how much pressure they put on Russell Wilson back in Week 8, Arizona is not a team I would want to face in the postseason given a choice. They're on the outside looking in; let's hope it stays that way. Go Jags.

Sunday afternoon: Packers (5-4) @ Giants (3-6)
Last week I said that I would still consider the Packers a threat despite the injury to Aaron Rodgers until I was shown otherwise. Their loss against the Eagles did a fair job of convincing me, but not quite all the way. One more loss should put the nail in the coffin. Although I certainly wouldn't want to go on the road to face a Giants team that's riding a huge winning streak, I expect they'll be handed a loss sometime between now and Week 15. Go Giants.

Monday night: Patriots (7-2) @ Panthers (6-3)
This one's a toughie, because as much as I'm glad the Panthers are around to potentially screw up the prospects of New Orleans and San Francisco, they're not necessarily a team I want to see in the postseason. At most, keeping them as a wild card team will reduce the chances of us facing them in the playoffs. I'll root for the Panthers whenever they're playing a team that I want to lose, but for now, Go Patriots.

With that, it's time to wrap up another edition of The Watch. It looks as though Seattle is finally starting to run on most (if not all) their cylinders, and I think we all expect this Sunday's matchup against the Vikings to be less chaotic than the one they survived the last time they played at home. The Seahawks continue to build on their best start in franchise history; a win on Sunday would mark the team's first ever 10-1 start heading into their bye week. And if the games elsewhere around the league continue to work out like they did last week, the chances of the Seahawks locking up a bye or homefield could really come into focus when they get back from the week off.

Xs & Os: Breaking down the schematics & strategy of the game of football

The Numbers Game: A long-term look at the franchise's direction & salary cap

Field Gulls Podcasts: Opinions and analysis on the latest from your writers

NFL Draft: Prospect analysis, scouting reports and a watch list for the Seahawks' next Draft