Share All sharing options for: Seahawks vs. Vikings snap counts

With the amount of shuffling on the offensive and defensive lines, the return of Percy Harvin, and the blowout-aided garbage time for backups, I thought it'd be worth taking a look at Seattle's snap counts from Sunday.

I went to the game, which was awesome, but due the general chaos from the seats and due to NFL Game Rewind's decision to not unlock the game until a few hours ago (not cool), my game observations will have to be delayed a bit. Look for those tomorrow. In the meantime... 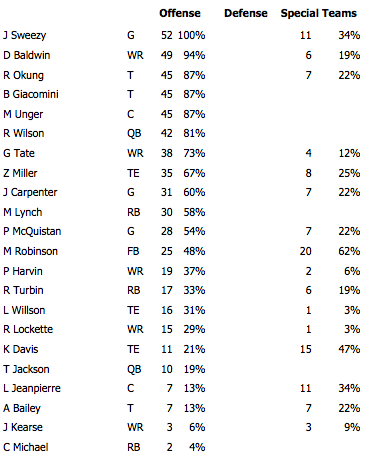 On the offensive line, J.R. Sweezy was the only player to not come out of the game. This is a tad surprising, considering Alvin Bailey only got seven snaps, and could have seen a few more at that RG spot. James Carpenter and Paul McQuistan rotated in and out at the left guard position, seeing 31 and 28 snaps, respectively (McQuistan played 7 snaps at LT, so Carpenter played quite a bit more frequently at LG than McQuistan). Russell Okung and Breno Giacomini each saw the lion's share of snaps at the tackle positions - with Bailey rotating in to RT for seven snaps and McQuistan spelling Okung at LT.

At the receiver position, Doug Baldwin led the way with 49 of the 52 offensive snaps. Golden Tate played 38 snaps, and Percy Harvin played 19. Ricardo Lockette (15 snaps) filled in for an injured Jermaine Kearse (3 snaps).

At TE, Zach Miller saw action on 35 snaps, Luke Willson on 16, and Kellen Davis 11. Marshawn Lynch led the way for the running backs with 30 snaps, followed by Robert Turbin's 16 and Christine Michael's 2. Mike Rob played 25 snaps, which seems relatively high, nearly half of the offensive snaps. Seahawks have been playing heavy two-back sets of late (note that Robinson likely is stealing snaps from Luke Willson). 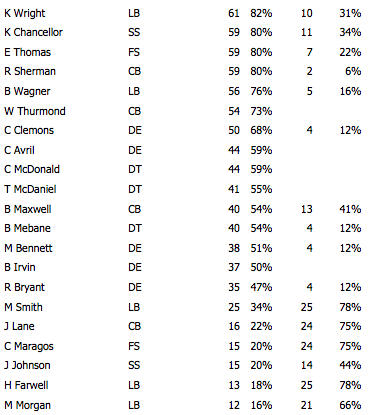 Nothing super notable about the defensive snap allocation - it was a pure rotation for the defensive line until late. The Hawks played 74 defensive snaps, and at the DE/LEO spot, Chris Clemons led the way (50), followed by Cliff Avril (44), Michael Bennett (38), and Bruce Irvin (37). As for the big dudes, Clinton McDonald (44), Tony McDaniel (41), Brandon Mebane (40), and Red Bryant (35) all rotated in.