And while this was supposed to be the week where we as fans could maybe relax a bit before our showdown against the Saints next Monday, the folks in charge of player discipline in the NFL made it pretty much impossible for a Seahawks fan to relax. With Thurmond suspended for the next four games and Browner gone for the year (and not likely to return to the team when his suspension is over), the level of concern surrounding the team's short-term future has gone up considerably. With arguably the biggest game of the season just around the corner, losing two players from the secondary is going to prove to be a major challenge against a team and a quarterback that embodies the term "pass-wacky". It doesn't help that many of the high-leverage games went against us last week, including the Saints outlasting the Falcons on Thursday and the 49ers walloping the Redskins on Monday night.

But before we get too wrapped up in the wake of all the bad news, let's take a deep breath and regain our bearings by seeing exactly where we stand in the NFC right now.

Lost in the turmoil of the past week is the fact that the Seahawks remain the only team in the entire NFL that's made it to 10 wins this year. Denver and Kansas City both got tripped up last week, resulting in both teams getting handed their second loss of the season. So at least we have that going for us. Sadly, the Saints winning in Atlanta means they remain just one game behind Seattle in the standings, which is close enough to give both New Orleans and Seattle a shared destiny of homefield advantage throughout the playoffs depending on who wins the game next Monday night. Meanwhile, the NFC North has turned into a serious slugfest with the Packers NotLossing their way back into the divisional race, the Panthers are still on fire, the Falcons are officially kaputsky, and the NFC East continues to be a contest of Who Sucks Least.

Here's how the NFC stacks up after 16 weeks: 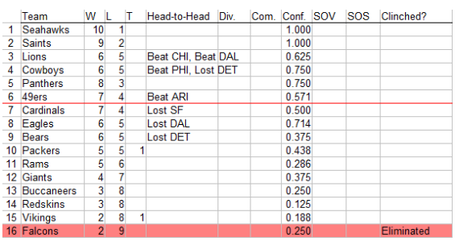 There are some pretty hairy tiebreakers this time around, as well as our first elimination of the season. Here's the explanation for each one:

1) There are four teams within two divisions who are all tied with 6-5 records - Detroit, Dallas, Chicago, and Philadelphia. Tackling the divisions first, the Lions' season sweep of the Bears gives them that tiebreaker, while the Cowboys have their Week 7 win over the Eagles breaking their tie. (Dallas and Philadelphia don't play each other again until Week 17.) That gives the Lions and Cowboys their respective division leads, and Detroit gets the #3 seed over Dallas on account of their Week 8 victory over the Cowboys. Outside of the playoffs, Philadelphia gets the #8 seed over Chicago with the superior conference record, 5-2 vs. 3-5.

2) San Francisco owns the tiebreaker over the Cardinals for the second Wild Card thanks to their Week 7 win over Arizona. Like the Dallas-Philly battle, the second meeting of these two teams won't come until the end of the season.

4) The Falcons are officially eliminated from playoff contention; the best they can do at this point is 7-9, and since the 49ers and Cardinals still have a game against each other, the worst either team can do is 7-8-1.

Time for another exciting episode of everyone's favorite playoff pileup, The 10-6 Game!

Introduced last week in the wake of ESPN's Playoff Machine going live for 2013, the rules are quite simple: Find the combination of outcomes that causes the most teams in the NFC to finish with a 10-6 record, and work out who would reach the playoffs on account of their tiebreakers.

Last week, we included eight contestants in our search for maximum gridlock. Sadly, the Packers have been disqualified, after they ended up with a tie against Minnesota last week. (Hey, this isn't called "The 10-5-1 Game". It's not even called "The 9-5-2 Game", even if that mathematically would cause the same win percentage.)

We have, however, included three new teams into the melange: The Seahawks, the Saints, and the Rams. This would give us a total of TEN 10-6 teams, including the entire NFC West and two teams from each of the other three divisions. Here's how such a traffic jam would play out:

With ten teams tied for the best record in the NFC, and only six playoff spots available, who would prevail?

Well, let's look at things one division at a time:

NFC North: Detroit has been able to hold that season sweep over Chicago's head since Week 7, and that would give the Lions the division crown.

NFC South: Carolina would end up with a season sweep over the Saints.

NFC East: Philadelphia and Dallas would have split their head-to-head matchups, but the Cowboys would get the nod over the Eagles on account of a 5-1 division record vs. 4-2.

Wild Card: The three remaining West teams would have to be ranked before we go any further. Count Arizona out; their divisional record is the worst of the three. Seattle and San Francisco would have split their season series, and their divisional record is tied, so we go to common opponents. Those amount to the other two divisional rivals, the AFC South, and the NFC South. The Seahawks would win out with an 8-4 record, against the 49ers at 7-5. With one team left from each division, we move on to conference record. Philadelphia ranks first in that category at 9-3, followed by New Orleans at 8-4, making them your two Wild Cards. Seattle at 7-5 and Chicago at 6-6 would be left out of the playoffs.

Seeding: Conference record would again be the deciding factor. At 9-3, the Cowboys would earn themselves homefield advantage throughout the playoffs. St. Louis, at 7-5, would be your #4 seed. That leaves Detroit and Carolina, who would tie for both conference record (8-4) but also common opponents (MIN, TB, ARI, NYG, both at 2-3). That would make strength of victory the deciding tiebreaker, and if the whole NFC West goes 10-6, the Panthers (who played the whole division) will reap the benefits and get the other first-round bye.

Here's a link to the Playoff Machine's illustration of the scenario. (Note that I marked all non-essential games as a tie to limit confusion.)

Was this all an exercise in frivolity? Maybe. But it does highlight a few important facts as the season heads towards the homestretch: Namely, that the Cowboys, Lions, and 49ers have a lot more control over their playoff chances than the Eagles, Bears, and Cardinals, and that the yet-to-be-determined season series between the Panthers and Saints will pretty much decide the NFC South title by itself.

We've got some new challengers for the top pick in the NFC draft, as a result of the Jaguars getting their second win of the season against the hapless Texans. Indeed, Houston is one of three teams now tied for the first pick with a 2-9 record, as well as the Falcons. The Vikings are just half a game behind them all at 2-8-1, and the Redskins are back in the top 5 after stinking it up against the Niners. Here's how the draft would look if it were held today: 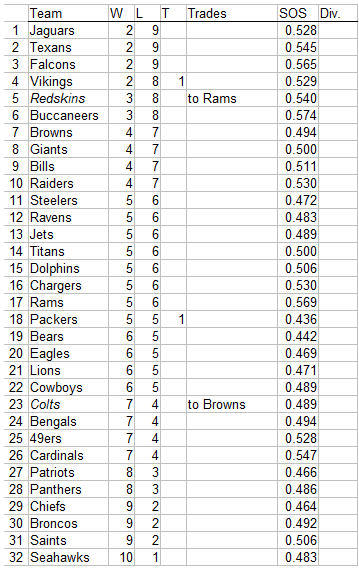 (Strength of schedule is found by totalling the win-loss records of all 13 opponents on a team's schedule, with double weight given to divisional opponents. Ties are computed as half a win for SOS purposes. Divisional record is used to break any ties, followed by a coin flip.)

With the Seahawks playing one of its biggest opponents on Monday, the only games we're really interested in next week involve divisional opponents. But in case you want to have a deeper investment in the games being played over turkey and stuffing (and an underrated favorite of mine, nut bread), here's how you should root in the other 15 games of Week 13:

Thursday morning: Packers (5-5-1) @ Lions (6-5)
From a purely Chicken-Little standpoint, the Packers would have to win out and the Seahawks lose out in order for any NFC North opponent to overtake Seattle in the standings, while Detroit (and Chicago, for that matter) could theoretically drop a game. Let's hope they drop that game right here. Go Packers.

Thursday afternoon: Raiders (4-7) @ Cowboys (6-5)
Much like the Lions above, there's a mathematical chance that Dallas could leapfrog the Seahawks in the standings if they win out. There's nothing to suggest that they will, but better to get any uncertainties out of the way ASAP. Go Raiders.

Sunday morning: Bears (6-5) @ Vikings (2-8-1)
This is the whole reason I've been preaching attrition in the NFC North - to keep us from having more than one chief rival when it comes to the top two seeds. Combined losses by the Bears and Lions would pretty much sew up at least a first round bye. Go Vikings.

Sunday morning: Cardinals (7-4) @ Eagles (6-5)
We talked a lot about top seeds in the playoffs for the first three games, but that doesn't mean we're forgetting what the higher priority is here. The NFC West can be locked up next week, but only if Arizona and San Francisco both lose their upcoming games. Go Eagles.

Sunday morning: Buccaneers (3-8) @ Panthers (8-3)
I think we're all feeling a little better about that 21-0 hole that the Bucs had us in during the first half of that Week 9 game. As much as I'm rooting for the Panthers to bloody the noses of the Saints when they FINALLY go at it in Week 14, I don't want them getting too strong. Go Bucs.

Sunday afternoon: Rams (5-6) @ 49ers (7-4)
St. Louis played the 49ers to overtime twice last season, winning at home and fighting to a tie at Candlestick... the tie that ultimately gave the division to San Francisco. A win by St. Louis this time could potentially lock the Niners out of the division race. Go Rams!

That'll do it for this week of The Watch. Amidst all the turmoil that has rocked the Seahawks fanbase over the past 48 hours, the unflinching reality is that there's still a game to be played at week's end. Whoever wins at CenturyLink Field on December 2nd will have the inside track for homefield advantage throughout January - and considering the teams in question, those are some mighty big stakes. As the 10-6 fustercluck demonstrates, absolutely nothing is certain yet in the playoff picture, so it's definitely not time to rest on our laurels yet. Here's hoping there's good news to report here next week. Something kinda like this...