It's 12:27 AM. I am now officially old enough to run for President. And the Seattle Seahawks are 8-1.

Call it weathering the storm, call it winning ugly, call it whatever you want, but the Seahawks have finally - FINALLY - gotten a bit of breathing room in the NFC. Because not only did the 'Hawks win on Sunday in historic fashion (their first 21-point comeback ever, that is), but the Saints lost, giving Seattle another game up on them in the standings for a total of 1 1/2 games. Even better, the 49ers didn't play at all, meaning we picked up a half game on them as well. Granted, we'll be coughing up that half game right back to both teams in a few weeks, but by then the Saints-Niners matchup will have already been played, meaning one of these teams will have picked up their third loss (or they'll both tie, but this game isn't being played on Christmas).

Elsewhere in the NFC, the Packers have had their playoff ambitions - not to mention their Super Bowl hopes - damaged severely due to the injury suffered by QB Aaron Rodgers in their Monday night loss to the Bears. That loss has caused a three-team traffic jam atop the NFC North (Not pictured: the Minnesota Vikings). The Carolina Panthers are slowly sneaking up on the aforementioned Saints, and hey look someone in the NFC East is over .500 finally!

After nine weeks of football games, here's where all 16 NFC teams rank: 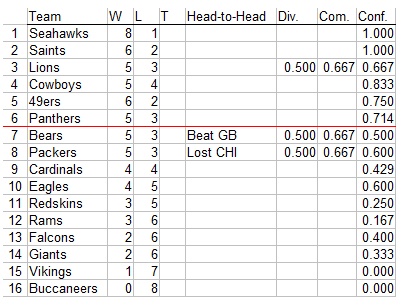 There are now four teams tied in the conference with 5-3 records, but due to the 6-2 49ers already laying claim to one Wild Card, there are only two playoff spots available to those four teams, one of which is the division crown. How do we end up with this configuration? Settle in, folks, because it's Story Time with Tim.

First, set aside the Panthers, because we have to deal with the three-headed monster that is the NFC North before doing anything else. Since it's a three-way tie, one team would have to have swept the others in order to win a head-to-head tiebreaker, but each has suffered one loss (GB to CHI, CHI to DET, DET to GB). Divisional record is also a wash - throw in a win against the Vikings for all three of them, and they all tie with a 2-1 record. So let's move on to common opponents, of which they'd had three (MIN, CIN, WAS). Guess what? They're tied there at 2-1 as well. The cracks finally show at conference record, where the Lions have the others beat, 4-2 vs. 3-2 (GB) vs. 3-3 (CHI). So that settles it, right? Wrong. Once Detroit gets put in the lead for the NFC North, the tiebreakers start all over again between the Bears and Packers - and since the Bears just beat the Packers last night, they get the higher spot even though the Packers have a better division record.

None of this matters, though, because let's bring the Panthers back into the discussion now that the division's been figured out. The first usable tiebreaker here is conference record, which the Panthers win easily by virtue of their 5-2 conference record. Thus, the Panthers are now your second Wild Card team, while both Chicago and Green Bay are on the outside looking in.

In other words, thank your lucky stars we're not 5-3.

Meanwhile, the Buccaneers almost - Almost! - got their first win of the season, which would have conceded the driver's seat to the #1 draft pick to the Jaguars. But since they lost (and we're all glad they did), their 75-59 schedule is mathematically weaker than Jacksonville's 74-58, and that means they keep hold of the top spot. The Redskins winning against the Chargers drops them out of the top 10 - good news for those of us paying attention to the pick that will eventually go to the Rams, whose own pick is now higher than the one they traded for. Here's how the draft order shakes out at this point of the season: 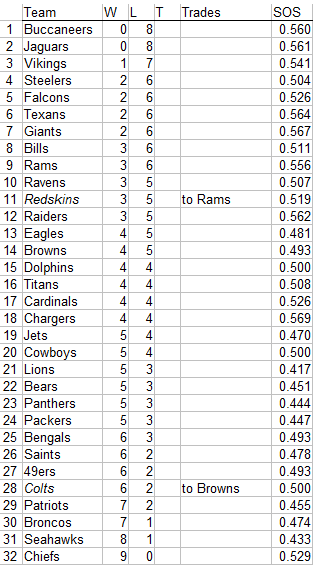 (Strength of schedule is found by calculating the win-loss records of all 13 opponents on a team's schedule, with double weight given to divisional opponents. Ties are broken by divisional record, and a coin flip breaks any remaining ties.)

No team has clinched a playoff spot quite yet - we're still probably a couple weeks away from that, especially since the AFC West continues to be such a battle. But just to remind everyone, once a team clinches, it's their performance in the postseason that ultimately determines the draft order for picks 21 through 32. Obviously, 32 is the number to shoot for once you get to that point.

Week 10 features a handful of matchups that will certainly be of interest to Seahawks fans, but before we get into that, a bit of a personal request.

For those who are unaware, last weekend marked the sixth annual Extra Life charity drive. During that time, thousands of gamers - both of the video and tangible variety - took part in a 24-hour gaming marathon to raise money for Children's Miracle Network hospitals across the country. This is my second year participating, and while scheduling conflicts prevented me from taking part in the event last week, I am still eager to take part - I'll just be holding my marathon this coming Sunday. That said, I'm still looking for contributions. 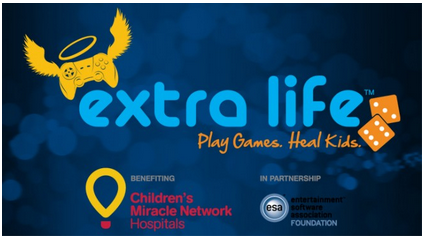 I'll be playing on behalf of Children's Hospital Los Angeles. While I realize it's not a local hospital, I have had the opportunity to visit the hospital a handful of times in the course of my work, and I can personally vouch for them as a truly excellent facility that treats thousands of children every year regardless of whether their parents can afford to pay. I have a very modest goal of $365 - about what I raised last year, mostly through friends and family - and I'm just hoping that a few of you will push that total over the top. All donations are tax-deductible and directly benefit CHLA. If you're willing to throw a few bucks in the coffer, I would greatly appreciate it.

Now then. Back to the business at hand. Considering where the Seahawks are at this point of the season, the team looks to be entering something of a "take care of business mode". With the Saints and 49ers both a game and a half back, all the team has to do is win the games in front of them and they'll be just fine. But it would certainly help if we can get a few more outcomes to tilt in our favor in case the team gets a second (or even third) loss along the way. And of course, we still have draft picks from divisional rivals to keep track of. On that note, here are the games to keep an eye on next week, and how they would best line up for us:

Thursday Night: Redskins (3-5) @ Vikings (1-7)
Washington is still very much in striking distance for a playoff spot by winning the NFC East, which is good for us. The more wins they get, the lower the Rams' first-round pick from them gets. Go Redskins.

Sunday Morning: Lions (5-3) @ Bears (5-3)
The top three teams in the NFC North are all snarled together, which is exactly what we want. I mean, you saw how hellacious the tiebreaker got between these guys. That makes this game essentially a freebie, but in case you're worried that we may get into a tiebreaker with either team, the goal would be to even out the conference record. Since the Lions lead that category 4-2 to 2-3, Go Bears.

Sunday Morning: Eagles (4-5) @ Packers (5-3)
With Aaron Rodgers out for potentially multiple weeks, the Packers suddenly look a lot more toothless than they did before last night's game. Will they get Rodgers back in time to stabilize the ship, or will fans in Green Bay have to be formally introduced to SeneCat? Who knows, but I'm still going to consider them a threat until proven otherwise - especially now that they have a running game. Go Eagles.

Sunday Morning: Rams (3-6) vs. Colts (6-2)
A win by a fading St. Louis squad would not only drop them in the draft order, it would also knock Andrew Luck a couple of pegs. Yes, I'm being petty, but there isn't much else of a reason to pay attention to this game. Go Rams.

Sunday Afternoon: Panthers (5-3) @ 49ers (6-2)
One of the marquee games of the season right here. You have to think that Carolina is poised to make a run at the now wobbly Saints, being just one game behind them with both head-to-head matchups still to play. At the very least, hopefully they can make a game of it so we can stop hearing about how the 49ers are winning their games comfortably while the Seahawks are grinding out their W's. Go Panthers!

Sunday Afternoon: Texans (2-6) @ Cardinals (4-4)
I think we're all in agreement in wishing Gary Kubiak a speedy recovery after his collapse at halftime of last Sunday night's game. This is more out of respect for a reeling Texans team than any ill will towards a division rival or playoff machinations, but here's hoping they pull out a win for their coach. Go Texans.

Sunday night: Cowboys (5-4) @ Saints (6-2)
As much as we've enjoyed bashing the NFC East this year, here's a game where the so-called "America's Team" can really do us a favor. The Saints are already a game and a half behind us; another loss would really diminish their threat level, almost to the point that the Week 13 matchup won't be quite so crucial. Almost. Go Cowboys!

Not pictured are the contests between the 3-5 Raiders and 2-6 Giants, and the Monday night game between the 4-4 Dolphins and 0-8 Buccaneers, both of which are of so little importance to the 'Hawks that you'll probably be more interested in the games for your fantasy teams than any influence they can have on your actual team.

This coming week is likely one of those games you circled on the calendar when the schedule first came out, as the Seahawks go on the road to take on the Falcons for the first time since they did that thing in the playoffs that I'd just as soon erase from my memory. Even though the Falcons are pretty much DOA in the playoff race at 2-6, the visions of that fateful day in January still linger with many fans like a bruise, and everyone is definitely in the mood for a little revenge. Sadly I won't be able to watch - though I'll probably play some Tecmo Super Bowl between these teams during the game to get my fix - but if things work out right, the "best start in franchise history" will continue to roll, and we'll have another chance to pick up a game on our rivals.