It's 3:35 AM. I have to pick up some audio equipment from a friend at five in the morning for a video shoot later today. And the Seattle Seahawks are 12-2.

Welcome to Week 16 of The Watch.

So what exactly did last Sunday's dismantling of the Giants do for the team? In a word, nothing. Seattle still sits atop the NFC Standings, two games ahead of the 49ers, Saints, and Panthers. But because the 49ers won their game against the Buccaneers, the NFC West crown and homefield advantage are still not a done deal just yet. It dangles above our heads, like the grapes of Tantalus, just out of our reach for the moment, but rest assured that there will be plenty of opportunity to snatch the top seed next week. The loss by the Saints, however, ensures that if and when Seattle does clinch the division, the #1 seed will be locked up with it.

That Saints loss, combined with the losses suffered by the Cowboys and Lions, have made the divisional races outside the west very interesting in the final two weeks. Carolina is now the supposed team of destiny, with two wins separating them from a first-round bye. Even though the Eagles lost to the lowly Vikings, the fact that the Cowboys lost as well means they maintain a one-game lead in their division; if the Eagles win next week and the Cowboys lose again, their season finale against each other might not amount to much. And the NFC North has suddenly gotten very close, as Matt Flynn has done just barely enough to keep the team in the chase while the Bears have finally managed to overtake Detroit for the division lead.

However, no NFC team that wasn't already in the playoffs clinched a spot this week, nor did any teams get eliminated from the hunt. We still have nine teams vying for the five berths that remain.

Here's where all sixteen teams stand after fifteen weeks: 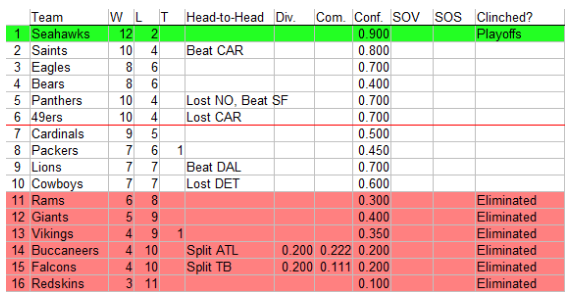 With several ties in the standings, many of which in high-stakes spots, here's how everything shakes out:

1. The Saints currently own the head-to-head tiebreaker over the Panthers due to their win in Week 14.

2. The Eagles rank ahead of the Bears for the third seed due to a better conference record, 7-3 vs. 4-6.

3. The Panthers get the top Wild Card spot over the 49ers due to their Week 9 head-to-head win.

4. Though Dallas and Detroit are now out of the playoff picture, the Lions still own a head-to-head tiebreaker win over the Cowboys.

5. Towards the bottom of the standings we have the Falcons and Buccaneers. They split their season series, and both teams have a 1-4 division record, but Tampa Bay has a 2-7 record over common opponents (CAR, NO, ARI, SEA, and the AFC East), while the Falcons are only 1-8.

Not only are there nine teams still competing for a playoff spot, but all of them are no more than one game behind their rivals with two games left two play. Bear in mind, the last week of the season is exclusively divisional games, and for many teams next week is also a division contest, so positioning can change drastically between now and the end of the year. Tiebreakers could certainly play a role in the final standings, so here's a quick summary of where everyone stands with each other.

One win, or one 49er loss, is all it will take to give the Seahawks the NFC West title and clinch the top seed in the playoffs. If the unthinkable happens and Seattle loses two home games(!) while the Niners win out, San Francisco would sadly win out over us on account of a better division record (4-2 vs. 3-3). The bad news for San Francisco is that if they don't win the division, they don't have a tiebreaker against either Carolina or New Orleans, as they've lost to both opponents during the season.

The only way they're getting out of the #6 seed is if they either finagle the division championship away from Seattle, or if one of the teams in the South fades enough to let Arizona into the Wild Card. As for the Cardinals, with a 1-3 divisional record and one loss already to the 49ers, there's no way for the Cardinals to do any better than the #6 seed if they make it into the postseason. And that would require them to make up one game against the Panthers or two against the Saints (as New Orleans owns the head-to-head tiebreaker).

The Eagles are in a similar situation with the Cowboys to where the Seahawks were with the Saints early in the season: leading them in the standings, but with a head-to-head game looming. Dallas won the first meeting between them, so the easiest way out of this mess is for the Eagles to handle Chicago at home this week while Dallas continues to sleepwalk through December and lose to the Redskins. If that happens, Philly is in before Eagles-Cowboys can be a factor. If Dallas can stay within a game of Philadelphia, though, they can sneak into the playoffs by winning the season finale.

The Saints, as sluggish as they've been the past few weeks, still have the driver's seat in the division. If they win the upcoming game against the Panthers, that would give them a one-game lead and a season sweep of Carolina, good enough to sew up the South. If the Panthers win, New Orleans could still eke out a division title with a win the following week at home against Tampa Bay and a loss by the Panthers at Atlanta; the Saints would win on account of a better division record.

This is the fun division. The Bears and Packers play each other in Week 17, which puts both of them way ahead of Detroit just in terms of outcomes. If either team goes 2-0, they're in. The Lions, however, made their road to the playoffs a whole lot bumpier after losing to the Ravens: they have the season sweep over Chicago, but season sweeps are worthless if you can't match the other team's win total. In order for Detroit to win the division now, they'll need to go 2-0 while Chicago and Green Bay lose one game apiece - which is problematic, given that the two teams face each other at the end of the season.

The St. Louis Rams have officially made off like bandits in their 2012 trade with the Redskins. If you'll recall, Washington traded their first-rounders from 2012, 2013, and 2014, as well as their second-round pick in 2012 to the Rams for the right to pick second in the 2012 draft, which they used to take Robert Griffin III. Two years later, and the Redskins are about to ship the second pick right back to St. Louis, with 2012's 6th and 39th pick, as well as 2013's 22nd pick (which they traded to Atlanta) as a bonus. This while RG3 has been shut down for the year after going 3-10 to start the season. It almost doesn't even matter who the Rams end up taking with this boomerang pick; they've managed to get what amounts to five extra players out of the deal.

And here we all thought that first-rounder we got from the Broncos in 2010 was a steal. (Don't get me wrong, I love me some Earl Thomas. But damn, this move was Daniel Ocean-esque.)

The Texans remain at the top of the draft board, and it's hard to see them relinquish it with just two weeks left in the season and the team in such disarray. Denver and Kansas City have clinched playoff spots, thus bumping them to the bottom of the order.

Here's how the full draft order looks at this point: 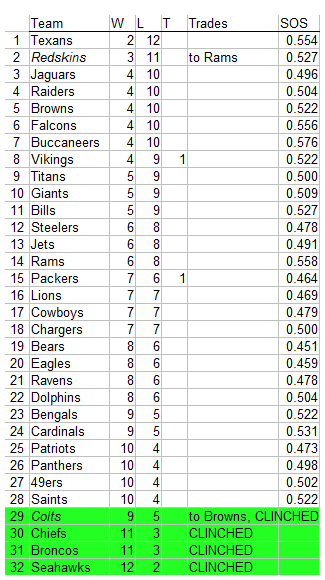 (Strength of schedule is found by totalling the win-loss records of all 13 opponents on a team's schedule, with double weight given to divisional opponents. Ties are calculated as half a win for SOS purposes. Divisional record breaks any ties for SOS, followed by a coinflip. Playoff teams draft based on their postseason finish, but no higher than 21st.)

If the Seahawks take care of business against the Cardinals on Sunday, this section of The Watch will be essentially moot. As it stands, there's only one other team in the conference that poses any sort of threat, but in case you've been knocked out of your fantasy playoffs and need to have a vested interest in the other games happening next week, here's your rundown.

Sunday morning: Buccaneers (4-10) @ Rams (6-8)
I'm all in favor of division rivals winning meaningless games at the end of the season that don't involve us. It's not like their draft stock is going to suffer for it, anyway. Go Rams.

Sunday morning: Cowboys (7-7) @ Redskins (3-11)
If there's one team that Washington can beat and drop down the draft board as a result, it's a team that's taken late-season collapses to a mythical level. Go Redskins.

Sunday morning: Saints (10-4) @ Panthers (10-4)
I dare say Carolina is a more resilient road team than New Orleans. For that reason, I'd want New Orleans to win the division, so that someone else doesn't knock them out on the road before they potentially come back to the CLink. Go Saints.

Sunday night: Bears (8-6) @ Eagles (8-6)
Having Chicago win this game would potentially give them the division right then and there, depending on how the Packers and Lions do earlier in the day. Plus, it would keep the NFC East a horserace to the end - and let's be honest, it's not like that game isn't going to get shoved down our throats next week anyway. Go Bears.

Monday night: Falcons (4-10) @ 49ers (10-4)
If this game has any consequences to us when it's played, it means that something went terribly wrong the day before. I seriously don't expect an utterly inert Falcons team to go on the road and beat San Francisco at what's likely to be Candlestick's last game ever, so hopefully everything will be settled before it comes to this. Nonetheless, there's nothing that says we want the 49ers to have any momentum at season's end. Go Falcons!

With that, another week of The Watch has come to a close. Next week will be the season finale, and hopefully we'll have good news to report as we finish out the season. Seattle has won 14 straight home games, so next week's game against the Cardinals is expected to be added to that streak - especially considering what's at stake for the team if they win. Still, any given Sunday is certainly in effect - just look at what happened to the Saints last week if you need any examples of a team getting too comfortable.