I used to really, really hate the Saint Louis Rams.

Like, super sports-hated the Rams. Hated the Greatest Show on Turf. Hated Mike Martz. Hated Marc Bulger. Hated Tory Holt. Hated that they beat us at home in that stupid Wildcard round game in 2003.

I used to really hate the Rams. Then, the 49ers happened.

So now I really, really hate the San Francisco 49ers.

However, let us never forget our first (in my estimation) NFC West rival. Let's not lose sight that Jeff Fisher has been coaching up a very talented team. Let's not forget that Les Snead fleeced Daniel Snyder just to move back four spots in the 2012 NFL draft. Let's not forget the Rams are almost custom-built to defeat Seattle.

Let's not forget about the Rams.

The Seahawks again struggled to create explosive plays, only generating 5 against the Cardinals' stingy defense. As has been extensively covered here and here, Seattle had several big plays quite literally slip through their fingers. The reasons are many: from drops by receivers, to slightly inaccurate throws, to fantastic plays by the Cardinals defense. Regardless, Seattle couldn't execute and be explosive on offense and lost at home because of it. 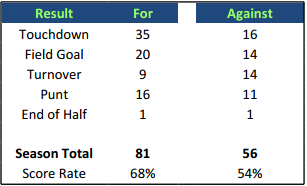 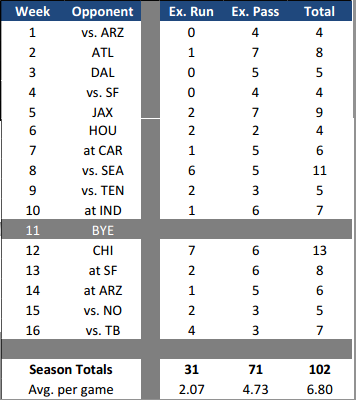 The Ram offense also shares a similar explosive balance to New Orleans, New York and Arizona. Plenty of explosive passes, not as many big plays in the running game. Only three times this season has St. Louis gained more than three big runs: last week against Tampa Bay, in Week 12 when they destroyed Chicago and the Monday night game against the Seahawks. I think we all remember Zac Stacy running over and through the Seattle defense; his 16 big runs lead the Rams.

The Rams explosive passing game is led by tight end Jared Cook and wide receiver Chris Givens. Cook has 16 catches while Givens has 15 The Rams don't have many big-play touchdowns, however. Only 8 total TDs from 102 total big plays. 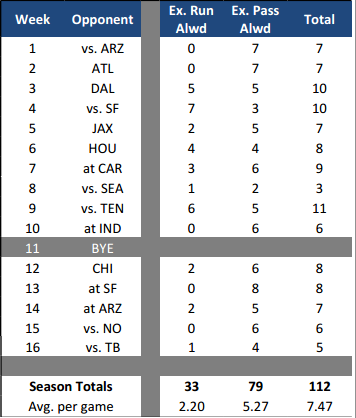 Kearse, Tate and Baldwin will need to execute on Sunday, since Seattle will most certainly go back to their bread and butter: shots down field off play action.

Seattle was more explosive in the running game against the Cardinals than I predicted, gaining 3 runs when I predicted only 1. I was again wrong guessing the Seahawks big passes, predicting 6 big plays and an offensive turnaround. Of course, that wasn't what happened. The defense only gave up one big run to Andre Ellington, which matched my guess.

I'm not too sure Seattle gets the running game going again to our satisfaction on Sunday. I think Seattle will just ring up 2 big runs. The passing offense will be what to watch; can Seattle contain Robert Quinn enough to give Russell Wilson the time to exploit a vulnerable Rams secondary? I believe the results will be mixed. Seattle will gain 4 big pass plays on Sunday.

The Seahawks have yet to disappoint on defense. The two last-minute scores allowed to San Francisco and Arizona are unfortunate but this defense has been nothing short of fantastic for the last four weeks. Seattle will limit the Rams to 2 big runs and 3 big passes. And that's it.

Rivalries tend to come and go in the NFL. I felt the Rams were our primary rivals in the early 2000s. Now, the 49ers have taken over. However, we would be mistaken to simply ignore what Jeff Fisher and Les Snead have built in St. Louis.

They might become our main rivals again sooner than we think.