It's 12:10 AM. I've returned from a raucous visit to the Novel Cafe right next door to the Wiltern Theater. And the Seattle Seahawks are 11-1... and playoff bound.

Well... what can you say. We'd been looking forward to that game for at least two weeks, and probably longer if you've been paying any attention to the NFC standings.

And then that happened.

The Seahawks 34-7 beatdown of the Saints accomplished a number of things for the NFC playoff picture. First and foremost, it makes the Seahawks the first team in the league to clinch a playoff spot. It also gives them a three-game lead over the 49ers with just four games left on the schedule, making next week's road clash against San Francisco one with division-winning potential. And lastly, it gives Seattle a two-game lead over the Saints for homefield advantage throughout the NFC side of the playoffs, compounded by the fact that the Seahawks hold the head-to-head tiebreaker in case the two teams end up with the same record.

So, yeah. Last night was a very good night for the Seahawks. For a fanbase that tends to look at things from the worst-case scenario perspective, we can now exhale. The team has pretty much done all it can do during the regular season, save for a possible franchise-best record of 14-2 or 15-1.

Elsewhere in the NFC, the Saints' loss now puts their divisional lead over the Carolina Panthers in jeopardy, as the two teams are now tied with a 9-3 record, with the first of their head-to-head clashes looming next week. The Lions have emerged once again as the leaders in the north, regaining a one-game lead over the Bears and an additional half-game over the Packers. And can you believe it, there are two - two! - teams in the NFC East that are both two - two! - games over .500. It's not all good news, however, as three more teams have seen the hatchet fall on whatever hypothetical playoff hopes they had. Here are the NFC Standings after 13 weeks of football: 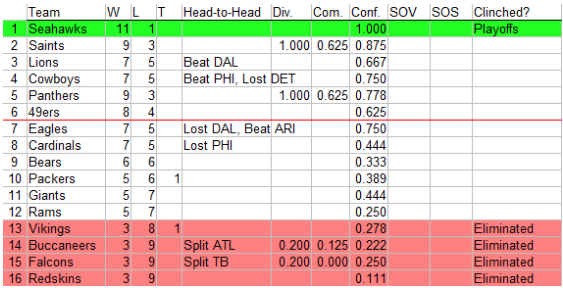 As for the tiebreakers, there aren't many of them, but the ones that exist go pretty deep:

1. It's Head-to-Head-Mania for the four teams that are tied at 7-5: The Lions (who lead the NFC North), the Cowboys and Eagles (who are tied for the NFC East lead), and the Cardinals (who are third in the NFC West). The divisional tiebreaker is done first, and the Cowboys continue to hold that head-to-head tiebreaker over the Eagles (which they'll keep until Week 17 at the very least). The Lions, however, have a head-to-head win of their own against Cowboys to give them a higher seeding. That leaves Philadelphia and Arizona on the outside, where the Eagles picked up a head-to-head tiebreaker over the Cardinals this past Sunday.

3. The Vikings, Buccaneers, and Redskins have all been eliminated from playoff contention, as the 6th-seeded 49ers have 8 wins already, and none of them can manage any more than 7.

4. When it comes to the bottom of the NFC, three teams are tied at 3-9: Tampa Bay, Atlanta, and Washington. The divisional tie between the Falcons and Buccaneers goes all the way to common opponents, as they split head-to-head and both have a 1-4 divisional record. However, against common opponents (CAR, NO, the AFC East, and the NFC West), Tampa Bay wins out with a 1-6 record while the Falcons are 0-7. The good news? Both of them rank ahead of the Redskins with better conference records, 2-7 (TB) vs. 2-6 (ATL) vs. 1-8 (WAS). Remember, conference record comes behind common opponents for divisional ties.

When the season began, there was definitely some speculation as to which team was going to end up with the #1 pick in the draft next May. The prevailing sentiment was that the Jaguars were the frontrunners for the top pick. Some thought that the Jets were going to go winless and snag the top pick (God knows how many people were rooting for it). Maybe if you waited until a couple weeks into the season, you might've pegged the Buccaneers, Vikings, or even the Steelers as the team that was going to blunder their way to the front of the line.

I significantly doubt that anyone would've suspected our current polesitter to be anywhere near the top of the draft order. 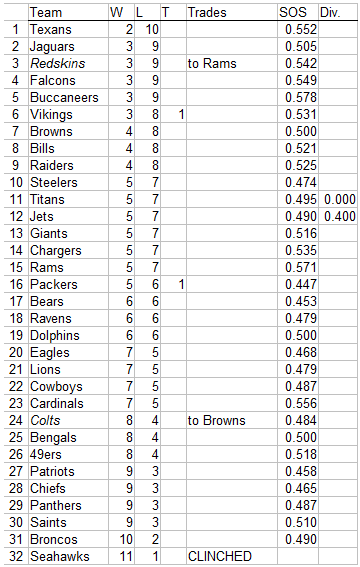 (Strength of schedule is found by totalling the records of all 13 opponents on a team's schedule, with double weight given to divisional opponents. Ties are calculated as half a win for SOS purposes. Divisional record breaks any ties in SOS, followed by a coinflip. Teams that clinch a playoff berth draft based on their performance in the playoffs, picking no earlier than 21st.)

That's right: the Houston Texans, who had won the previous two AFC South division titles and started the year looking to extend their reign, are now alone at the top of the draft order thanks to their tenth straight loss against the Patriots. The Jags are right behind them picking second, and the Redskins look to be handing, at the very least, a top-5 pick to the St. Louis Rams in return for the trade that got them the #2 pick last year.

It's getting to the point where it almost doesn't matter who wins in the games that the Seahawks aren't playing. Such is the luxury of having a team that's leading the conference by such a healthy margin - especially since our next game is against a divisional opponent that could potentially grant us the #2 seed. Because of that, we can start turning our attention a little bit towards who our potential playoff opponents might be. Even if we get to host the games, it still would be nice to have the right opponent coming to the CLink. Thus, here's how we want Week 14's games to shake out:

Sunday morning: Falcons (3-9) at Packers (5-6-1)
Attrition dictates that the Packers should win this to keep the NFC North a race to some degree, but there are a few fans who are a bit worried about the eventual return of Aaron Rodgers being a threat to our playoff run. I'm not quite as worried (at least, not as much as I am about the Detroit), but since the Lions have the division all but wrapped up and one more loss will essentially snuff out the Packers' hopes, Go Falcons.

Sunday morning: Lions (7-5) at Eagles (7-5)
As mentioned just above, I'd rather have the Packers or Bears representing the NFC North than Calvin Johnson and Ndamukong Suh. Philly has been trying desperately to leapfrog the Cowboys in the standings for a while; let's give them some hope. Go Eagles.

Sunday morning: Chiefs (9-3) at Redskins (3-9)
I know we've all observed the inability of the Rams to turn a high draft pick into something worthwhile, but that doesn't mean we want the Redskins to hand them what would currently be the #3 pick and have another chance at it. It's the longest shot of the week, but nevertheless: Go Redskins.

Sunday afternoon: Rams (5-7) at Cardinals (7-5)
Arizona's been kinda feisty the past few weeks, their loss to the Eagles last week notwithstanding. Losing this game would seriously complicate their playoff hopes, and have the added bonus of pushing the Rams down the draft chart with their own pick. (C'mon, guys, don't be greedy now.) Go Rams.

Sunday night: Panthers (9-3) at Saints (9-3)
It was said earlier in the year that we were all going to be Panthers fans, as they played against most of the opponents that we considered threats to our season. Well, it's Week 14 now, and the Panthers have now graduated into one of those threats. Now that we have two games and a tiebreaker over both of them, we can pretty much root for whoever we want. Might as well make it easy and root for the home team each time - especially since I'm much more concerned about Carolina's defense than that New Orleans offense we just bottled up last night. Go Saints. (And in case you're wondering, a tie doesn't really help us: it would put both teams at 9-3-1, which would still make them both capable of overtaking us if disaster strikes.)

Monday night: Cowboys (7-5) at Bears (6-6)
Want a couple of laughs? Find a Cowboys fan and ask them what month it is. The Bears are probably the most unthreatening team that still has a realistic shot at the postseason, so let's hope the Cowboys have their trademark December swoon so that Chicago still has a chance at the division. It'd be nice for them to have to play here for once. Go Bears.

That'll do it for this week's rendition of The Watch. This Sunday's contest against the 49ers has the potential to sew up both the division and a first-round bye - and the only reason there isn't more at stake is because the two teams that are two game behind us are playing each other. There's a very real possibility that I'm not going to have much to talk about in this article a couple weeks from now.

Oh, and as a sidenote: I know there's a lot of talk in the Los Angeles area about Backstage, but if that's too far a drive for you or you want to try a different hangout spot, I would definitely recommend Novel Cafe on Wilshire & Western. That place was going bonkers last night, and they had some great food and drink specials during the game. It was pretty inexpensive, too; even with a generous tip I was able to get out of there for only about $25. (Then again, I don't drink, so that lowers the price quite a bit.)