Share All sharing options for: Observations from Friday's Mock Game

I was an idiot this year and forgot to reserve my spot on the berm for training camp. Luckily, my fandom punched my pride in the face. So I pulled out a piece of printer paper, found the only Sharpie in my house, and made myself a sign to bum my way into practice. A big thanks to the 12 with an extra wristband and a heart of gold. Much love.

- For those who went to practice or watched the livestream, I imagine there's a certain degree of concern for the offense after watching Friday's practice. To put it lightly, they didn't look sharp. I'm certainly not giving them a free pass but forgive me for not panicking; it was the first "game situation," it was raining, several key starters didn't practice or play much, and the opposing defense is really freakin tough. I'll save my judgement of the offense's status until the preseason games.

- I didn't focus on the QBs today. None of them did anything to really surprise or disappoint me.

- Marshawn Lynch didn't get many looks in the mock game but looked beastly anyway, duh doy. He clearly has a much better understanding of the zone blocking scheme than Christine Michael or Spencer Ware. Both rookies showed their youth in struggling to find the right hole to hit.

- Michael absolutely explodes with the ball in his hands. That sounds cliche but Michael's athleticism stands out in a big way - and that's saying something considering the talent populating this roster. His overall game is still raw though. I expect Robert Turbin to return from injury as the clear backup to Lynch.

- Today was good and bad for rookie Luke Willson. Early in the mock game he had a miscommunication with Russell Wilson that lead to an ugly incompletion on third down. For some mysterious reason I'm thinking the ball was where it supposed to be and the receiver wasn't. The kid bounced back a bit with a nice sliding catch for a touchdown in a two-minute situation for the 1's only TD of the day.

- Sean McGrath knows he's making this team and plays like it.

- The hype around Jermaine Kearse appears legitimate. He seems to have a rapport with Wilson and is catching the football with a lot of confidence. He had one fantastic grab today over the middle - elevating, extending over his head, and weathering a tough shot from Alan Bradford. He could be a focal point for the offense in preseason games. 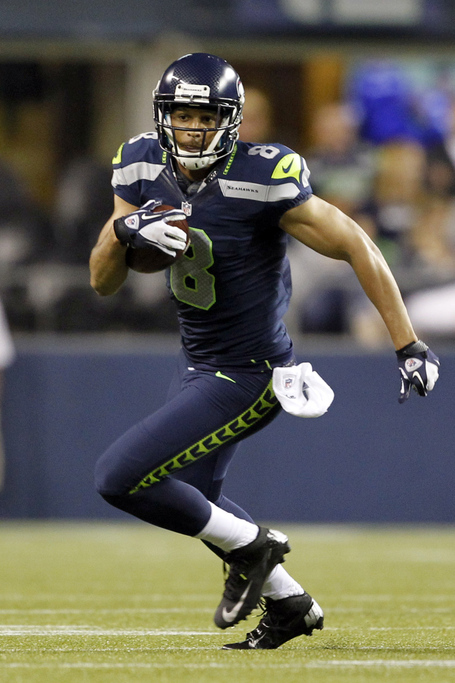 - Stephen Williams has reportedly had an excellent camp and played Z with the 1s today in the absence of Sidney Rice. Wilson targeted him three separate times on vertical routes without success. The first came on a throw back across the field which resulted in a nasty fall to the ground (via Winston Guy). The next came against Brandon Browner on an absolute dime from #3 - tight coverage but Williams should have caught it. On the final pass he managed some separation against Richard Sherman, but as we've so often seen, Sherm recovered to bat down a slightly underthrown ball. My quick-take on Williams is ideal height/speed/vertical deep threat, sound route runner, inconsistent hands.

- Bryan Walters is doing his best Charly Martin impression but I just see too much receiver talent to envision him making the roster. Nice guy to have on speed dial though.

- I'm not as high on Phil Bates as some. However he's definitely an intriguing prospect. On the final drive of the scrimmage he made consecutive catches along the sideline using his frame to shield the ball. The second of which was particularly impressive - snatching the ball out of the air.

- Harper didn't see many balls and let the only memorable pass, a sizzler from T-Jack on a slant, go through his hands. To my eyes it looked like he didn't get his head around (route running) rather than an outright drop. Harper needs to develop and I hope the Hawks allow him that opportunity. I doubt he would make it through to the practice squad.

- There are quite a few good looking young offensive linemen but as a whole they look sloppy and unrefined. Tom Cable has basically said as much. It's not surprising given the projects undertaken and how early it is in training camp. Hopefully we'll see some improvement with each passing preseason game. I think the OL played a big role in the offense's overall struggles today.

- I keyed in on JR Sweezy at RG with the 1s and James Carpenter at LG with the 2s. Sweezy protected surprisingly well against Michael Bennett on several passing plays. He had a bit more trouble with the length of Tony McDaniel. Still, Sweezy continues to develop and that's an exciting prospect with his athleticism. How well this guy has transitioned from defense to offense just blows my mind. Thank you Tom.

- James Carpenter vs Jesse Williams was fun to watch. Power v power. One run to the left converged on them like a black hole. It resulted in one giant mess of a two yard gain. No doubt the coaches wanted to feature that matchup. I want both those guys playing on Sundays this year. Carpenter especially is just a monster.

- I've been hearing about how the Sam and Leo positions are somewhat interchangeable in this defense since the day Pete Carroll arrived in Seattle. However, that dynamic hasn't manifested itself on the field so much with Gus Bradley as defensive coordinator. Based off of today's practice, it looks like Dan Quinn is transitioning back to Carroll's original vision for those positions. We also saw quite a few 3-4 looks.

- Bruce Irvin played mostly SAM with the 2s. As we saw last season, he's extremely dangerous on stunts. He got into the backfield on one such passing play today. Needs work in coverage but the movement skills are there.

- O'Brien Schofield should contribute right away. He's a solid pass rusher who can drop. I expect Malcolm Smith to platoon with Irvin/Schofield this season at SAM. Speaking of Smith, he flashed around a bit, as per usual.

- Camp surprise Benson Mayowa played Leo with the 2s and played well. I couldn't find an arm length on him but I'm guessing 33+ inches. He has great flexibility and a knack for finding the edge. He'll take some developing but this could be Seattle's 2013 UDFA steal. It's easy to view surprise UDFAs as "happy accidents" but on a certain level you must credit Carroll and Schneider for finding these guys.

- KJ Wright's first step is incredible. Even in basic coverage drills, KJ consistently breaks first among the LBs in the direction the QB "throws." He's remarkably comfortable in space for how long he is and should accel as the Hawks' weakside linebacker.

- Allen Bradford played Mike with the 1s and I'm finally starting to warm up to him as a linebacker. The returning similarities to a 3-4 defense really play to his strengths. He can certainly bring the thunder and his core strength stands alone among the LBs.

- Jordan Hill and Michael Bennett manned the DT spots in nickel packages. Hill really does have "a way" about his pass rush. He's just extremely active and well, effective. I must admit I was a bit disappointed with Bennett. He couldn't get much going and appeared a little worn out. We'll see how he looks in the preseason.

- Tony McDaniel showed some disruption at 3-technique in the base defense. Carroll noted him in his press conference. He's winning the competition there and I'm reasonably optimistic about how he'll perform. He's got a lot of length and strength - both qualities we know this coaching staff covets on the defensive line.

- Whoever the hell is #92? Brandon Mebane? Sounds made up. He'll be out of here in a week.

- Jesse Williams and Jaye Howard both performed well with the 2s. Williams plays as advertised - big and nasty. It's not often you have a fifth round rookie who will so clearly make the team and warrant playing time. I was high on Howard as well entering the 2012 NFL draft. The guy has a great first step and displayed some technique today that he sorely lacked last season.

- I dunno if you've heard, this secondary is pretty decent.

- Winston Guy is tough to gauge. On the one hand he plays like he's worthy of being Kam Chancellor's back-up. However there's a maturity factor, which I hate questioning, but does concern me with him. Today he upended a leaping and exposed Stephen Williams, then escalated the situation by trash talking Williams after he was slow to get up. Earl Thomas dragged him aside and Red Bryant had some words for the young strong safety. I hope Guy gets his head screwed on straight because he has the talent to earn playing time this season.

- Jeron Johnson jumped a Russell Wilson pass down the sideline and almost came down with the pick. There's a reason he's still around.

- Will Blackmon is a good corner. It's too bad the final roster isn't 57 players.

That be all I got. Go Hawks!