It's 10:22 in the morning. I'm seven hours away from a flight back into Burbank. And the Seattle Seahawks are 3-0 for only the sixth time in franchise history.

Time for Week 3 of The Watch.

It's the third week of the NFL season, and storylines are already starting to emerge around the league. Most of those stories come in the form of "What's wrong with the _______?" queries after a team thought to be a playoff contender gets off to a sluggish start. Fortunately, the Seattle Seahawks are not a subject of one of those stories. They're atop the power rankings of ESPN, Yahoo! Sports, and NFL.com after a 45-17 pasting of the Jacksonville Jaguars that yours truly was in attendance for. (More on that later.)

However, looking at the way the conference rankings would stack up right now, the Saints' two early divisional wins would give them the upper hand in playoff seeding. Observe: 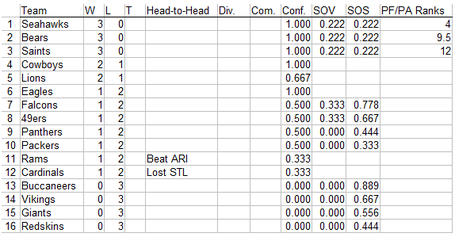 (For overall conference standings, teams are ranked first by W-L record, then by head-to-head results if applicable, followed by conference W-L record and divisional W-L record. We'll start looking into the deeper tiebreakers - net points and offensive/defensive ranks - starting Week 5 when the teams start to separate a bit more.)

If the playoffs were to start next week, we'd have a 1-2 team squeaking into the final Wild Card spot. Meanwhile, the 49ers, Rams, and Cardinals are all mired in the bottom half of the conference standings. Amazing what one week can do to a rival.

In draft news, the big splash from the previous week was the Browns trading RB Trent Richardson to the Colts for a 1st-round draft pick next year. That means that we now have two teams who won't be making a pick in 2014 draft, as the Redskins still owe the Rams a first-rounder. And with Washington off to one of those troubling 0-3 starts, they'd be handing the Rams a top-5 pick if the draft were held tomorrow. Eep.

Here's how the rest of the draft order shapes up:

Right now, it looks like the Browns traded the 3rd pick from last year is being traded for the 21st pick next year. Not the worst possible outcome for trading a first round pick (**cough**AaronCurry**cough**) but it did get a few people to scratch their heads and wonder why they're giving up on Richardson this quickly.

Before we get into the rooting guide for week 4, I'd like to share my experience from this past Sunday at Centurylink Field, when I got to see my first ever Seahawks game in person. I think the whole day could be summed up in two words:

As someone who has lived in places other than Seattle for most of my life, the talk of the 12th man and just how loud the stadium got was something of a fable out here. To actually be in the stands witnessing it, though, was something completely awe-inspiring. My friends were actually trying to downplay the noise a bit - last week was the big game, they already got the record, the Jaguars aren't as good - but I got the sense as the game progressed that the Seahawks could've been playing a Pop Warner team and the place would've gotten just as loud and rowdy as it would in a playoff game.

And I'll remember a bunch of other sensory memories of that game just as much as the crowd noise. The mass of humanity swarming the concourses more than an hour before kickoff. The green ponchos dotting the stands as Mother Nature couldn't decide between a light sprinkle or a steadier downpour. The smells of kettle corn and barbecue from the concession stands. And of course, getting a firsthand look at Russell Wilson fooling everyone - including those of us in the stands - with the beautiful play-action that set up the first touchdown to Zach Miller. The game wasn't what I would call a nail-biter, and that was intentional - this being my first Seahawks game, I made sure to pick a "safe bet" - but I still heartily enjoyed myself, and I can't wait for the next opportunity to take a trip up to the CLink and partake in another experience like the one I had last Sunday.

Now then. Week 4 is already looming, and we as Seahawks fans are anticipating the road tilt we'll be having against the Houston Texans, and the potential of our first ever 4-0 start. But there are 14 other games going on, and many of them have the potential to affect our situation as well. On that note, here's how we want next week's games to pan out to most benefit the Seahawks:

49ers (1-2) @ Rams (1-2)
Really, it depends on which team you think will do better for the rest of the year. Conventional wisdom says the Niners, but they're in quite a bit of disarray given their apparent lack of running game, Kaepernick coming down to Earth a bit, and Aldon Smith's rehab absence. Still, watching the team that was going to pose as our year-long rival getting off to a 1-3 start sounds hilarious. Go Rams.

Giants (0-3) @ Chiefs (3-0)
How quickly a team can turn around - in both directions. The Giants don't seem to pose any threat against us right now, so it just boils down to how much you want to see Tom Coughlin's dour face after a loss. Personally, that sounds fun. Go Chiefs.

Cardinals (1-2) @ Buccaneers (0-3)
I'm going to be really magnanimous here, because I'd prefer not to have the "NFC Worst" label on our division again after seemingly shedding ourselves of it last year. Besides, wins by St. Louis and Arizona means that San Francisco would be all alone at the bottom of the division. Go Cardinals, just this once.

Eagles (1-2) @ Broncos (3-0)
Denver seems to be our biggest opponent for "best team in the league" discussions. Philly is unlikely to knock them down a peg, but wouldn't it be nice if they did? Go Eagles.

Cowboys (2-1) @ Chargers (1-2)
A loss by the Cowboys puts them at 2-2 and keeps the NFC East relatively open for all four teams. Go Chargers.

Dolphins (3-0) @ Saints (3-0)
It's the first real test for both teams in this matchup. Obviously, the Saints will just keep hogging that #1 spot in the seedings until and unless they fall to someone. No better game than this one right now. Go Dolphins.

I'll see you guys next week, when hopefully we'll be celebrating the best start our team has had in its 37 years in existence. Until then, Tim Connolly signing off with the only catchphrase this site ever needs - GO HAWKS!!