Tell the Truth Monday (on Wednesday)

Share All sharing options for: Tell the Truth Monday (on Wednesday)

The Seahawks scored 31 points before surrendering one, and Jacksonville spared themselves a goose-egg with a 2-yard touchdown drive following an ill-advised Russell Wilson pick. This game was never close, is my point, so really, there's not a ton to really gripe about from this week. Seattle's defense was suffocating, Seattle's offense was explosive, hitting on nine plays of 20 yards or more, including three plays of 30+ yards, and that's not counting a pass interference call on a bomb to Stephen Williams that netted Seattle a big chunk of yards...

Special teams, apart from a partially blocked kick, played well too. It was a blowout in the truest sense of the word, and a byproduct of this is there's not a ton to 'tell the truth' about in a negative sense, specifically from this game. That said, I set out to make this a weekly series, so I'll 'tell the truth' about some things I didn't like and throw in some things I did like. Here we go.

To start off, the first thing I wrote down in my notes to mention here was that the Jaguars seemed to have Russell Wilson's snap count down pat. David covered that sufficiently already earlier today, but suffice to say, the Jags were getting absurdly excellent jumps on the snap and were getting off the ball faster than the Seahawks were. When defenders are timing a snap count in which they don't know better than the players that do know the snap count, that's slightly disconcerting.

I will say that this seemed to happen much more frequently during the beginning of the game and tapered off as things went on. Can Russell Wilson learn to alter his cadence and rhythm? Sure. Do they want him to? Probably? Not sure. As it had been posited in the earlier threads, perhaps early on, Wilson is keeping things simple with his cadence to attempt to cut down on false start penalties and to allow the line to really get into a rhythm during the game, particularly since Russell Okung is out and James Carpenter is finally getting up to speed.

In zone blocking - particularly running - timing is absolutely essential and each step of each lineman is choreographed together, so getting 'off' on the snap quickly and in a totally synchronized manner is important. In pass blocking, it's a similar situation, but it's particularly tough for the tackles to see the football while awaiting the snap, meaning they often must rely on the audible count. Wilson probably kept his cadence fairly basic to ween Paul McQuistan into the position on the outside.

The weening didn't really help that much, to be honest. Pete Carroll sang McQuistan's praise after the game but it was pretty clear he struggled on the outside. Jacksonville's wide-9 alignments (putting the defensive end at a particularly wide angle) gave both McQuistan and Breno Giacomini fits, and there were a few occasions where both players literally looked surprised that there was someone running at Russell Wilson, because their kick-step and slide was so slow and ultimately futile.

Exhibits A & B on two plays in a row below, and both happened during the Seahawks' excellent scoring drive to end the first half (which I'll break down in further detail later this week):

On the first one, both Breno and Paul are a full step or two behind in reacting to the snap and Jacksonville's defensive ends easily get past them both. In true Russell Wilson manner, the Seahawks' diminutive QB jukes and slides back, making both defensive ends crash into each other cartoonishly, knocking each other out while Russell stands there laughing and pointing (possibly embellished).

Wilson scrambled for a first down, but process wise, what the hell is with the slow kick steps to stem the oncoming rushers? It's four man rush. It legitimately looked like both of them forgot what they were supposed to be doing - Breno particularly, who has that 'oh shit there's a guy coming' look on his face (if you could see his face, I mean). 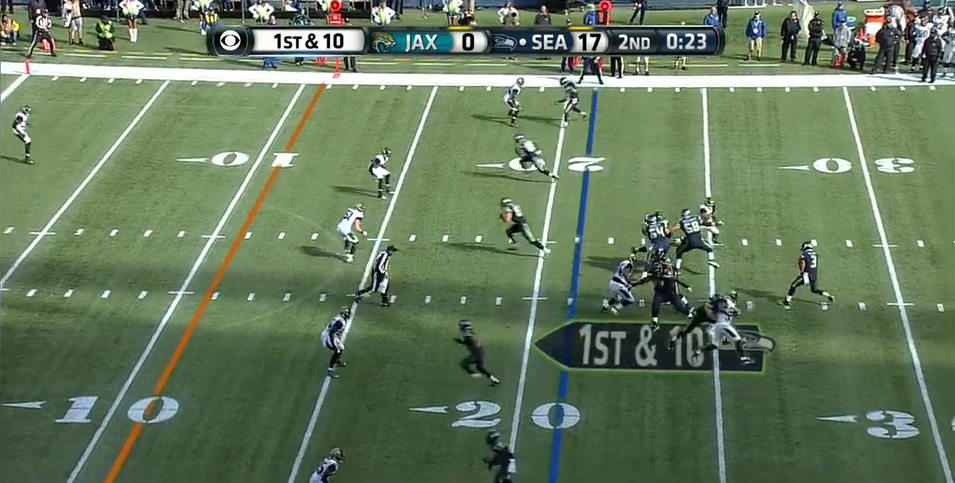 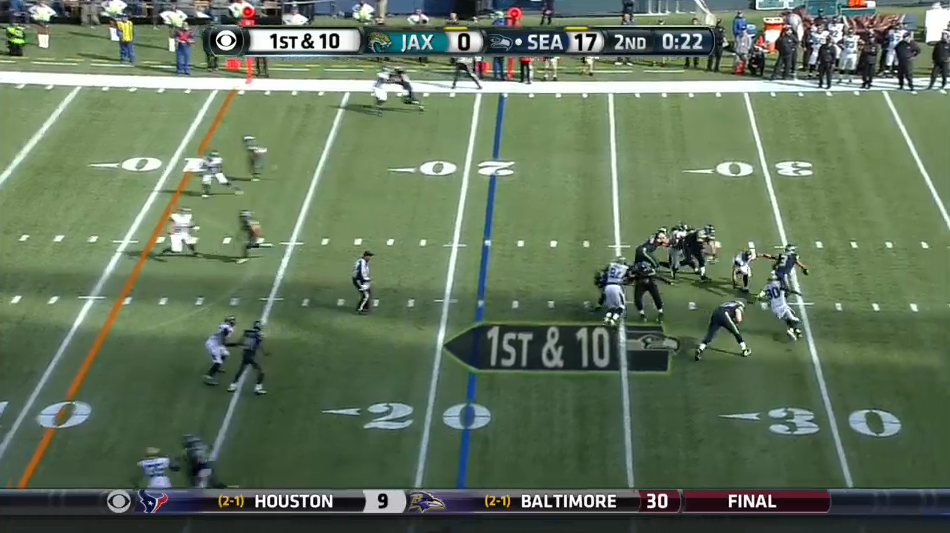 The subsequent play, Wilson steps into the pocket to deliver a strike to Sidney Rice, who's running a post route, but again, McQuistan is badly beaten around the egde - which was a problem against the Niners and Aldon Smith too. 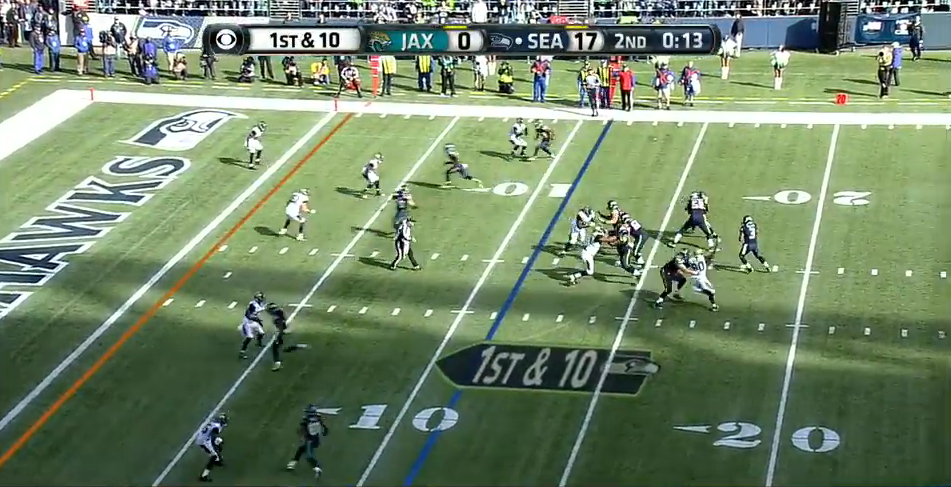 Pete Carroll made sure to mention several times in press conferences since the game ended that both Alvin Bailey and Michael Bowie played great on Sunday - with Bowie getting snaps at both tackle spots and Bailey getting action at right tackle. Part of me wonders if we'll see both starting this weekend. That.... would be interesting. Not necessarily in a 'scary' interesting way either, more in a genuine "I wonder if they'd be better?" kind of interesting.

Overall, I've seen a lot of people point to the offensive line's play as the main weak link thus far for Seattle and while that's actually probably true, I don't necessarily feel worried about the overall performance in this one, considering it's come out that Breno had a knee issue (and Paul McQuistan probably shouldn't be playing tackle). I thought pass protection looked adequate, apart from what I pointed out above, I think the interior held up, giving Russell ample time to deliver a few redline throws, and if you watch the All-22, Wilson had some excellent throwing lanes in this game, which is always an important but overlooked factor.

As for run blocking, I'd agree with David's post this morning that there are strides to be made. I think James Carpenter's game was a mixed bag - one-on-one domination on a few plays buoyed by major mistakes on others.

Above, you can see Carpenter lead the way for Lynch, clearing a relatively giant path for him to run through. Jason Babin manages to grab Lynch's ankle as he runs by, causing Lynch to dive, but as the replays showed, Lynch stretched the ball over the line to get in. However, the ball was called down at the one, Pete Carroll had already exhausted his challenge, and the Seahawks set out trying to punch it in on third down.

Carpenter blew his block on the subsequent play, allowed penetration (in fairness, Jacksonville sold out against the run and got penetration just about everywhere on the line), and Seattle had to settle for a field goal. This was kind of a microcosm for the day for Carpenter - some really great blocks in there, which he can certainly build on, but consistency is the thing I'm looking forward to getting from him.

Seattle had another blocked punt. Watching the replay of it only makes you scratch your head. It almost looks like Seattle was going for maximum coverage on the play by blocking as if it were a screen-pass. Three to four guys on the line more or less "Ole'd" the guy in front of them to start running downfield and one of Jacksonville's special teamers managed to get a hand on the punt.

I suppose you could take this play together with the blocked punt from the San Francisco game, though, admittedly, that play was a fluke that should never have even been allowed to happen (Seattle should've been called for an illegal formation). Either way, you could say that Seattle needs to get their punt team coverage cleaned up a bit because I know Pete Carroll absolutely hated that they let Ryan's punt get blocked.

Overall, though, I thought Seattle executed in all three phases. The defense ended up giving up 17 points but seven of those points came on a two-yard drive and seven more came in total garbage time. I'm not sweating it.

- Christine Michael looked awesome. I can't wait until they start playing him in earnest.

- It was good to see Brandon Browner get out there and shake off some of the rust. He played well, I thought, especially considering the amount of time he's missed.

- Clinton McDonald looked like a man possessed. I guess he doesn't want to get released again. The interior line looked nice in general - on back-to-back plays at one point, Brandon Mebane bowled through the center to blow up a run play in the backfield, and then McDonald bowled through the guard to sack Chad Henne.

- Seattle played a lot of off coverage with their corners later in the game - bailing right at the snap or right before it. I think this was a personnel thing - both Jeremy Lane and Byron Maxwell are probably better playing off the ball than in press - and I think it was a conscious decision to not let any big plays get over their heads.

- Earl Thomas is fucking fast. On one play later on in the game, there was a miscommunication or missed assignment between Bobby Wagner and Mike Morgan, that meant Cecil Shorts III got past Seattle's linebackers with nothing but daylight in front of him. Earl Thomas broke as the pass left Henne's hand, but he was already on the opposite side of the hashes from the play so he had a ton of ground to make up. When you look at the play on the All-22, Earl looks like he's running in fast-forward. He makes up ground quickly, catches up to Shorts, and pushes him out of bounds, saving the touchdown.

- Sidney Rice and Golden Tate straight balled-out in this one.

- That catch by Doug Baldwin on the go-route was insane.

- J.R. Sweezy is quietly having a couple of great weeks playing at right guard. He's been assignment correct, from what I can tell, and has been holding his blocks well, hasn't gotten walked back into the pocket, and does a good job with his cut blocks.

- Zach Miller - he does a little of everything. It's actually worth your time to just go back and watch the game on 'condensed' and just pay attention to Miller.

- Kellen Davis, or Mega Golden Tate, as we've come to call him on the twitters, had a few catches. Can you imagine if he becomes a viable target at 6'7, 265?

- Seattle's go-to nickel rush package was Avril-Bennett-Schofield-Clemons. Schofield would line up in a two-point stance at around the 3-technique position, and often just rush/dart straight ahead, allowing Clemons to stunt underneath him. On one play like this, Clemons got a QB hurry, and on another, he saw the stunt wasn't there so he essentially pushed Schofield into the pocket and collapsed it. Imagine this grouping once Bruce Irvin gets back on the field. That's the 'spinner' role we've heard about, and Irvin can move all around prior to the snap and rush from different angles.

That's what I got right now. My week has been crazy busy so I haven't had as much of a chance to break stuff down as I normally do (and obviously that's why I didn't do this on Monday).