(Press play and then continue reading.)

2008 was the year of loss. This was the year of 12 Seahawks losses…the worst association with 12 you will ever see. It was also a year of really tough personal losses: I lost my job at CBS Radio, I lost my grandmother, I lost the love of my life. It was like being locked away in prison for crimes of love, or work ethic, or talent that I never committed. It was the lowest point I think I’ve ever been to. But therein lies the beauty of sports. Why we need sports. We need it so we don't forget. Forget that... there are places in this world that aren't made out of stone. That there's something inside... that they can't get to, that they can't touch. That's ours. It’s hope.

2010 was a new hope. That was the arrival of Pete Carroll and John Schneider. Carroll, who suffered through terrible years in NY and NE, scandal at USC, but came out clean on the other side. From his arrival here, there has been a reexamination of literally every conventional wisdom, strategy, and practice we had yet seen in the NFL. Carroll made it simple: get busy competing, or get busy dying. 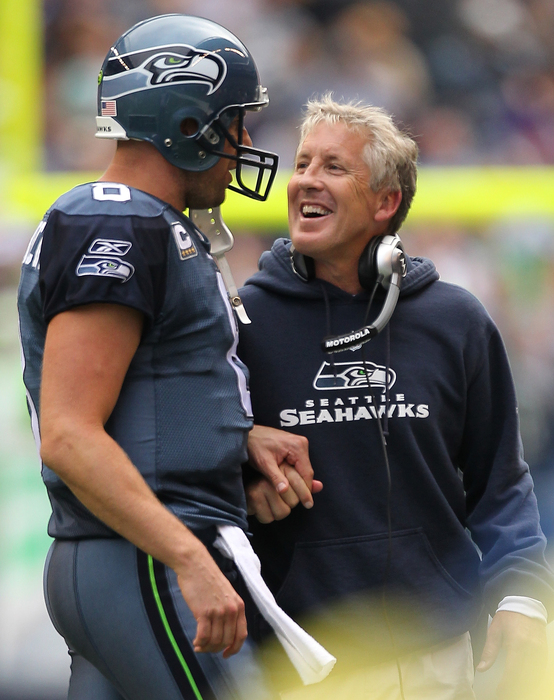 The results weren’t immediate. A couple of 7-9 seasons in Carroll and Schneider’s first two years here. I do believe those first two years were the worst for Carroll, and I also believe that if things had gone on that way, this place would have got the best of him. But Carroll never lost faith that a championship team is simply a result of pressure and time. That’s all it takes really; players putting pressure on themselves to perform their own job at the best of their ability, and time. That, and a big goddamn running back.

2012 was special. In 2012, the Seahawks had become quite an obsession for me…especially the innate ability John Schneider seemed to have finding gems in the draft. I became quite the rockhound myself. I had followed all of the college players in anticipation of the Hawks’ draft that year. I would come up with all of these long-winded essays on the birth of the "Elephant/Leo" at USC, and the college player who best embodied the specifications of a Leo in that draft class. I would post most of those writings on my Facebook account. I had created a draftboard prior to the 2012 draft that included roughly 30 players…five of which became Seahawk draftpicks, including Bruce Irvin, Bobby Wagner, Robert Turbin (three of the first four picks). I thought that was pretty impressive. That post, and all others on my Facebook, went unnoticed. Nobody cared. 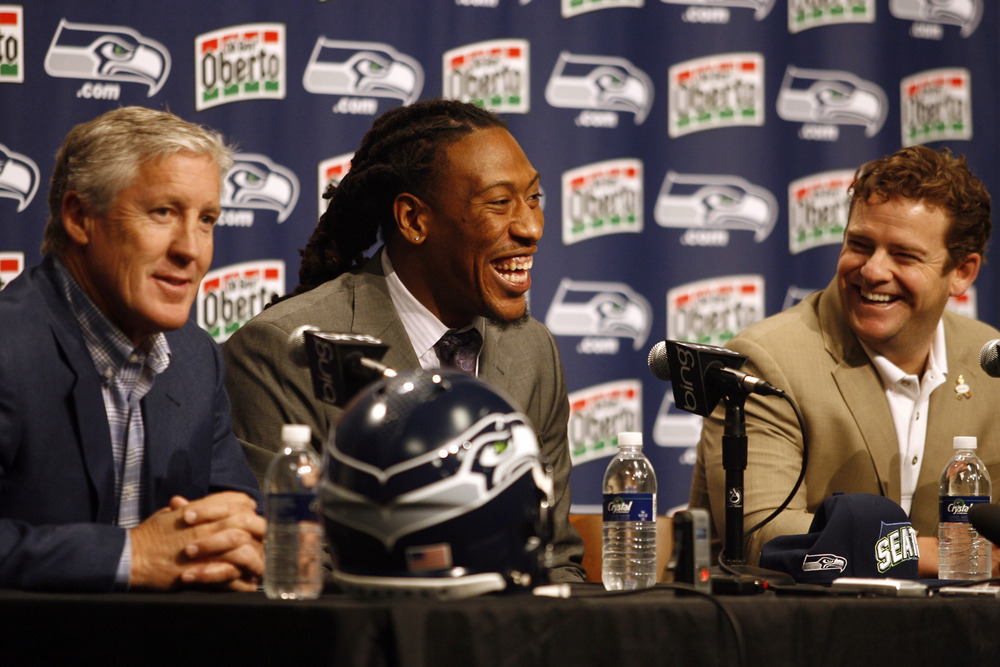 And even when people did notice, it seemed they noticed simply to argue. I can quite clearly remember arguments with friends from college after the draft about how good the class would be – I loved it, they hated it. Or, into the preseason, arguing about the fact that I thought the Seahawks should start Russell Wilson over Matt Flynn – they didn’t. Then, in midseason 2012, there was this consistent cynicism that the Seahawk defense wasn’t elite. These were all arguments I ACTUALLY had with friends. I seemed to be the lone voice of optimistic reason.

Almost worse than having to defend the Seahawks against those opinions, were the selective memories of these friends after their cynicism had been proven certifiably wrong. And then the indignation when I would give them that look of, "I told you so." It became such a frustrating pattern. Count that amongst the reasons I completely shut down my Facebook account last year.

Also amongst the reasons I closed my Facebook: I had bought in totally to Twitter. If you don’t know the expression, "Facebook is for people you used to be friends with…Twitter is for people that you SHOULD be friends with," I can confirm that it is absolutely true. Twitter, and specifically Seahawk Twitter, became my outlet. And my inlet (#Phrasing… in a not-dirty the way-that-it-sounds way). It’s just this ever expanding reservoir of interesting information and discussion on this topic that we all have come to adore: Seahawk football. 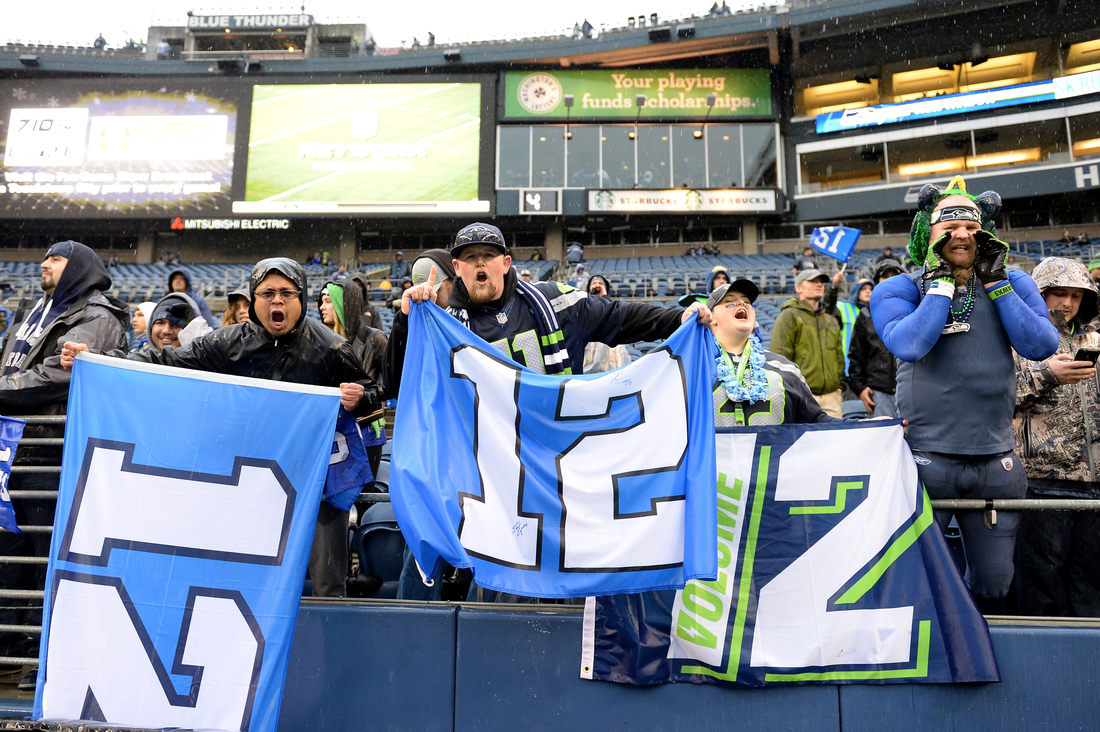 In addition, Field Gulls (specifically, initially, Danny Kelly) became this incredibly welcoming venue for my Seahawk musings as immediately as my first fanpost went up on the site during the playoff run of January 2013. Like, "you mean all this shit that I get really geeked about, you guys like??? Like, more than people that actually know me??" It was like going home. Then the kicker of it all…you actually get to meet these distant strangers-become-peers, and then the peers become friends, and the cycle repeats.

And all the while this is happening for me personally, the team that brought us all together is putting together its strongest season ever. Whatever was thought/said/forecast of these players before joining this team, under this leadership…throw it out the window. What began as a roster from the island of misfit toys has become the deepest roster in the league, and to a man an entire roster of over-achievers. Over-achieving the scouting reports, over-achieving their own physical "limitations", over-achieving their own lofty expectations, and over-achieving the league. I tell you, these players have soared higher and farther than anybody in a gray place dares to dream. It is like some beautiful bird flapped into our drab little cage and made these walls dissolve away, and for the briefest of moments, every last 12th man in Seattle felt belief. 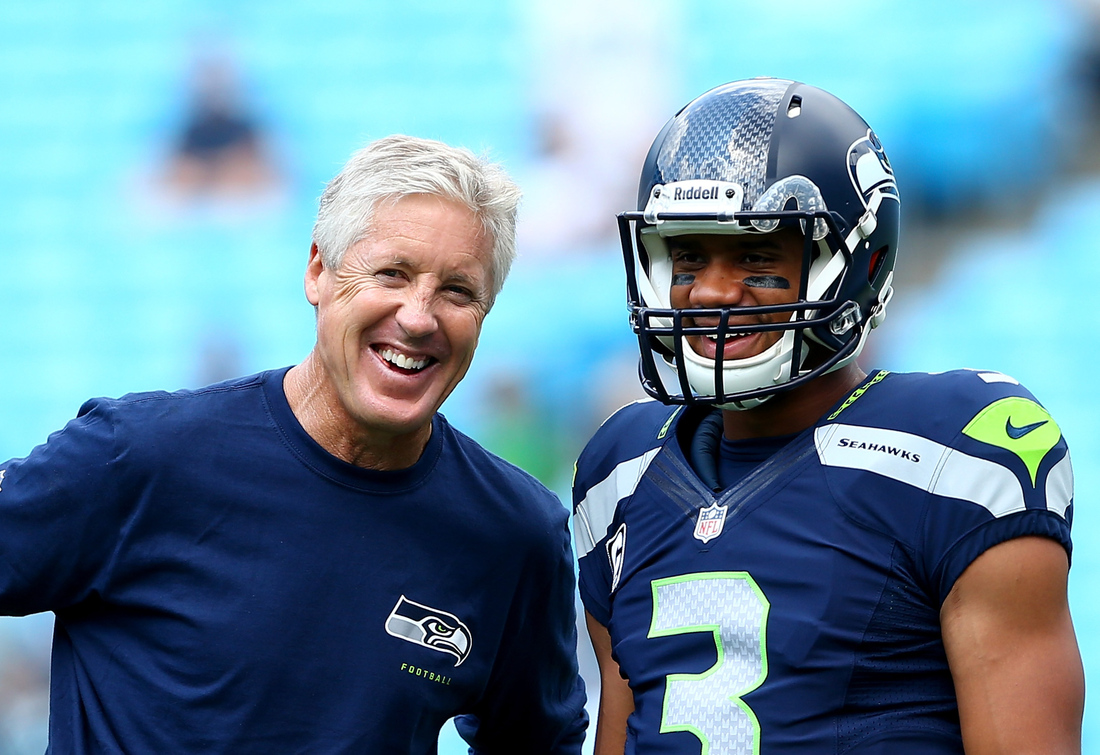 But it isn’t even just in Seattle. It’s all of Washington…from Vancouver in the South to Jacson Bevens up in Bellingham. It’s all of the U.S…from Kenneth Arthur down in California, to Hey Guys it’s Bigtimer in New York City. It’s all over Europe…from Magnus Bendixen in Denmark to Thomas Beekers in the Netherlands and Rob Staton in the UK. I’m sure other teams have their share of international proliferation, but I don’t care about theirs. I just like to marvel in ours. It’s just so damn cool.

The marvel of how widespread the nation of 12 is (and will be) only pales in comparison to how little help we get in spreading the message from the NFL media. I can understand why the media don’t understand the Seahawks; just this week, with Marshawn as centerpiece, I see why some of the writers took him for snobby. He has a quiet way about him…a walk and a talk that just isn’t normal in the NFL. He runs the ball like a man in a park without a care or worry in the world. Like he has on an impervious coat that would shield him from tacklers. Yeah, I think it is easy to say…we all liked Marshawn from the start. 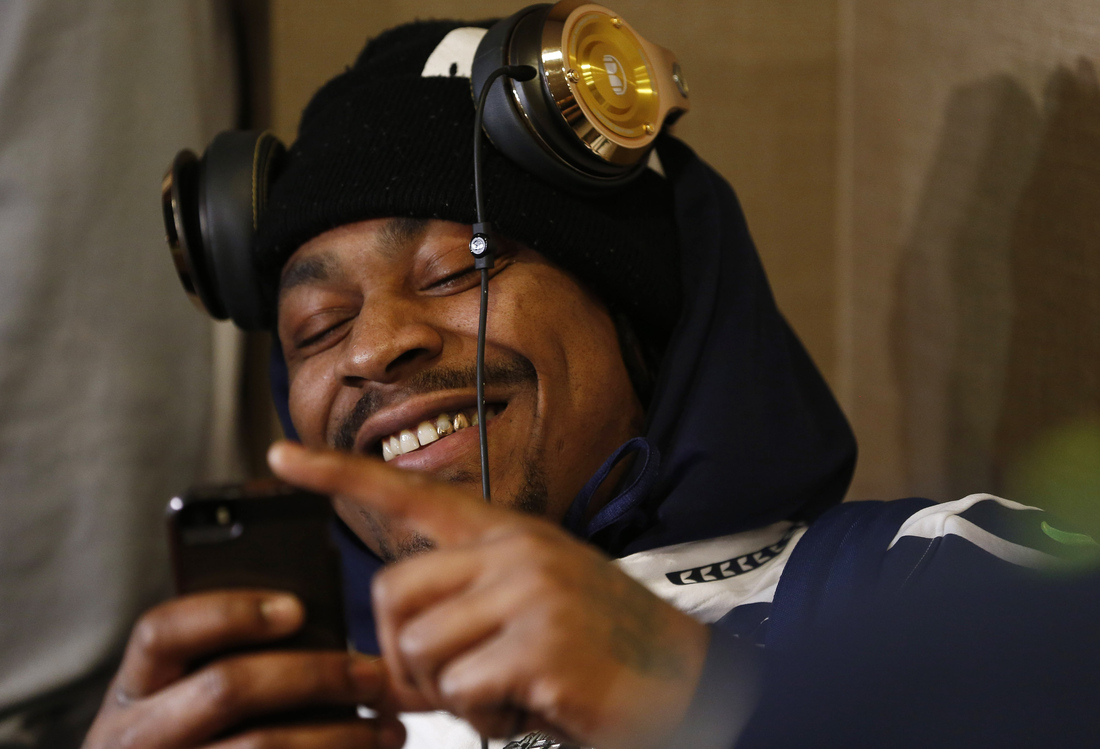 I liked most of these players from the start. When you come from being castoff and forgotten, and you work and fight and strive, with passion and intelligence and resilience, you become the type of players and the type of team that a city will always remember. It’s the qualities and traits that I like most in myself, and that I hope will be seen again on a bigger stage someday.

Hope. There was that word again. Hope is a good thing, maybe the best of things, and no good thing ever dies. 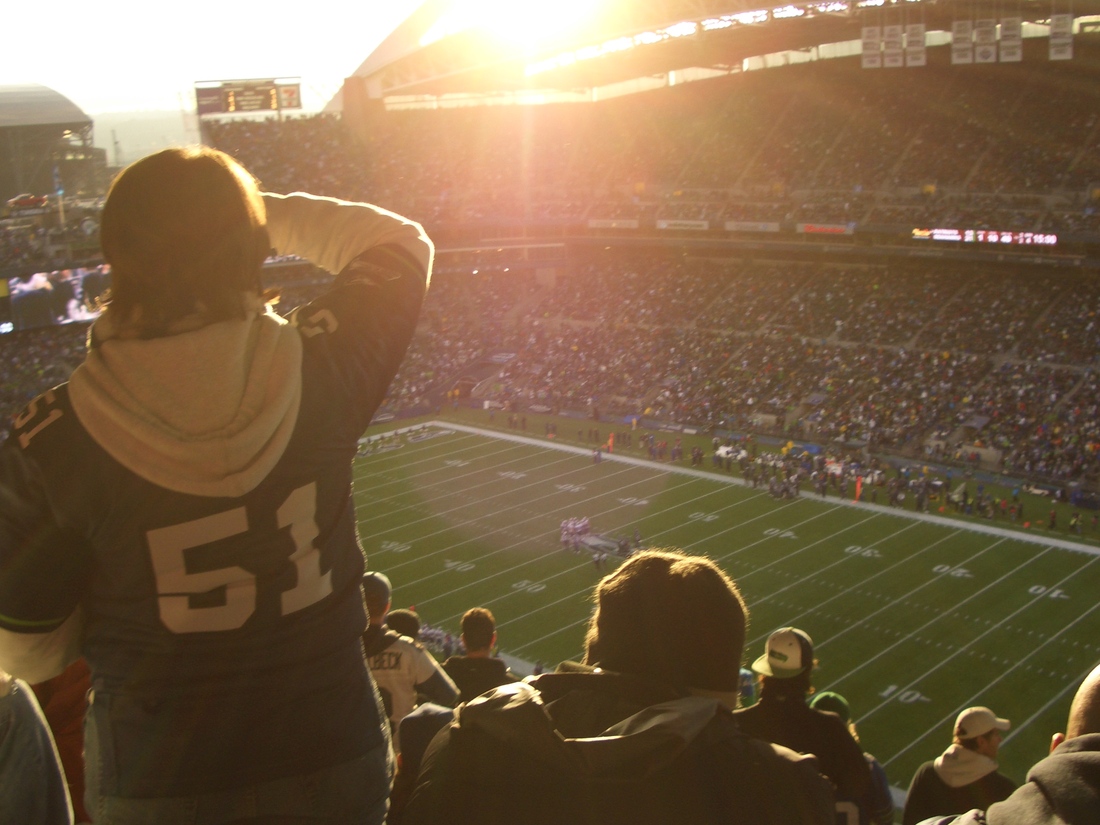 Because of what the 12th Man has been to me and inspired from me these last two years, on this Super Bowl Sunday, I will break bread not with the family of my birth or the friends of my youth, but with the family of 12. In presence of Matt, Luke, Patton…all new friends through Seahawks…and in the spirit of the hundreds of you that see fit to listen to anything I have to say on Field Gulls or twitter simply because we have found a synchronistic belief in this city, in this team, in this season, in this moment, I will spend this Super Bowl where the 12 become 1. Win or lose…we did it right, and we must dwell in this. This is our vindication. This is our redemption.

I find I'm so excited I can barely sit still or hold a thought in my head. I think it's the excitement only a 12th man can feel, a 12th man near the end of a long journey whose conclusion is uncertain. I hope the Seahawks can make it across the goal line. I hope I can see my new friends deliriously happy and shake their hands. I hope the Super Bowl Champion banner is as college navy blue as it is in my dreams. I hope.