In an excellent article by Robert Klemko over at MMQB, Pete Carroll relates a conversation he had with role-model and mentor John Wooden (aside, one of Carroll's defining moments as a coach -- the reason that he remolded his philosophy and developed the Win Forever program -- was when he realized that Wooden's first National Championship was in his 16th year of coaching; Wooden would go on to win the National Championship in 9 out of the next 11 seasons). Carroll had asked Wooden whether he changes his philosophy year-to-year.

Said Carroll, "That's my feeling now. You either have your philosophy or you don't. You stay with what you believe in, you bring it to light as creative as you can. The philosophy never changes-sometimes the look of it changes, because the players change. The players will become more in tune to what's expected of them. I think that's how this works. We'll see."

Carroll echoed that sentiment in an interview with CBS from the NFL Owners' Meetings, and talked specifically about his plan to repeat as Super Bowl Champions. Essentially, he's just going to do what he's been doing, and what he did while establishing a dynasty at USC.

"It's really hard to get there and it's really hard to maintain it,'' Carroll told USAToday. "The challenge of sustaining is greater. It's been demonstrated that teams can get there but for the most part, they can't stay there. There's all these natural things that happen to a team. There is attrition and expectations all those things that have to deal with that success that make it very difficult. So there are really, really great expectations to get that challenge on and demonstrate how to do that.''

"We've worked really hard on our mentality to deal with success."

"I've been through this (at USC)... you know, on a level that you can at least compare. So, I'm really excited to see our guys take to it. We have a way to do this, and I'm looking forward to it.

"It doesn't matter what the other teams do, in the division or anybody. It's going to be about what we do. We have to see if we can manage this exceedingly well, and then take it one day at a time, forever. It's not about next year's Super Bowl, it's about the first day - on the 21st, are they ready to go to work? Then, we make a great April 21st of it. And then go to the next day. Then do that with a discipline and a focus that obviously other people have had a hard time doing. There's a million distractions and all that stuff - screw it, we're going to do it."

As Carroll told Klemko, "We set a direction on having the greatest offseason of our lives, individually. That doesn't mean you cant go out and have fun and live the life. You can work out and still be on the Tonight Show. The most important thing that will happen is if we can recapture the work ethic that made us what we are. Nothing else really matters.

"If a guy's not having the best offseason of his life, he's going to get beat out, I think. That's kind of the way we roll."

As per usual, Carroll is looking to perpetually foster a culture in his program where literally no player ever feels comfortable. He pits them against each other. He manipulates. He creates what he views as a competitive cauldron. 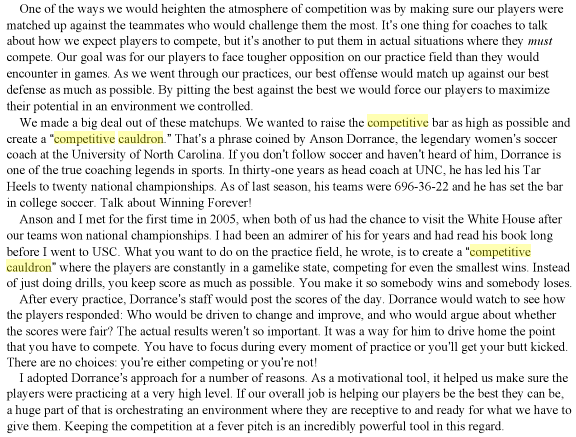 Carroll on how he defines and understands competitiveness, or what he calls 'grit':