Richard Sherman wants to choke Michael Crabtree out for the rest of his career *figuratively, I assume*

Share All sharing options for: Richard Sherman wants to choke Michael Crabtree out for the rest of his career *figuratively, I assume*

There is now video from the premiere of American Muscle which features a cameo by Richard Sherman explaining his spat with Michael Crabtree from last season. It was shot months ago, but the re-hashing of the Sherman-Crabtree beef has shot back to the forefront of the media cycle. Just to collect what was reported on the story and put it all in one place, here's the background.

First - the context. Sherman makes The Tip, the play that sends the Seahawks to the Super Bowl. Here's what it looked like from NFL Films:

Sherman, after celebrating with his teammates briefly, quickly runs over to Crabtree, who is walking away, slaps him on the ass, extends a hand, and says/yells "Hell of a game! Hell of a game!"

Depending on your point of view, he was gloating (his timing... and history... would suggest as much), looking for his props (which seems to be the case, per a recent recounting), or being sincere in intentions (his tone sure sounds sincere, but again, his timing was awful if he was really looking to be a good sport). Regardless, we don't know what Sherman's intentions were, but we know how Crabtree took it: 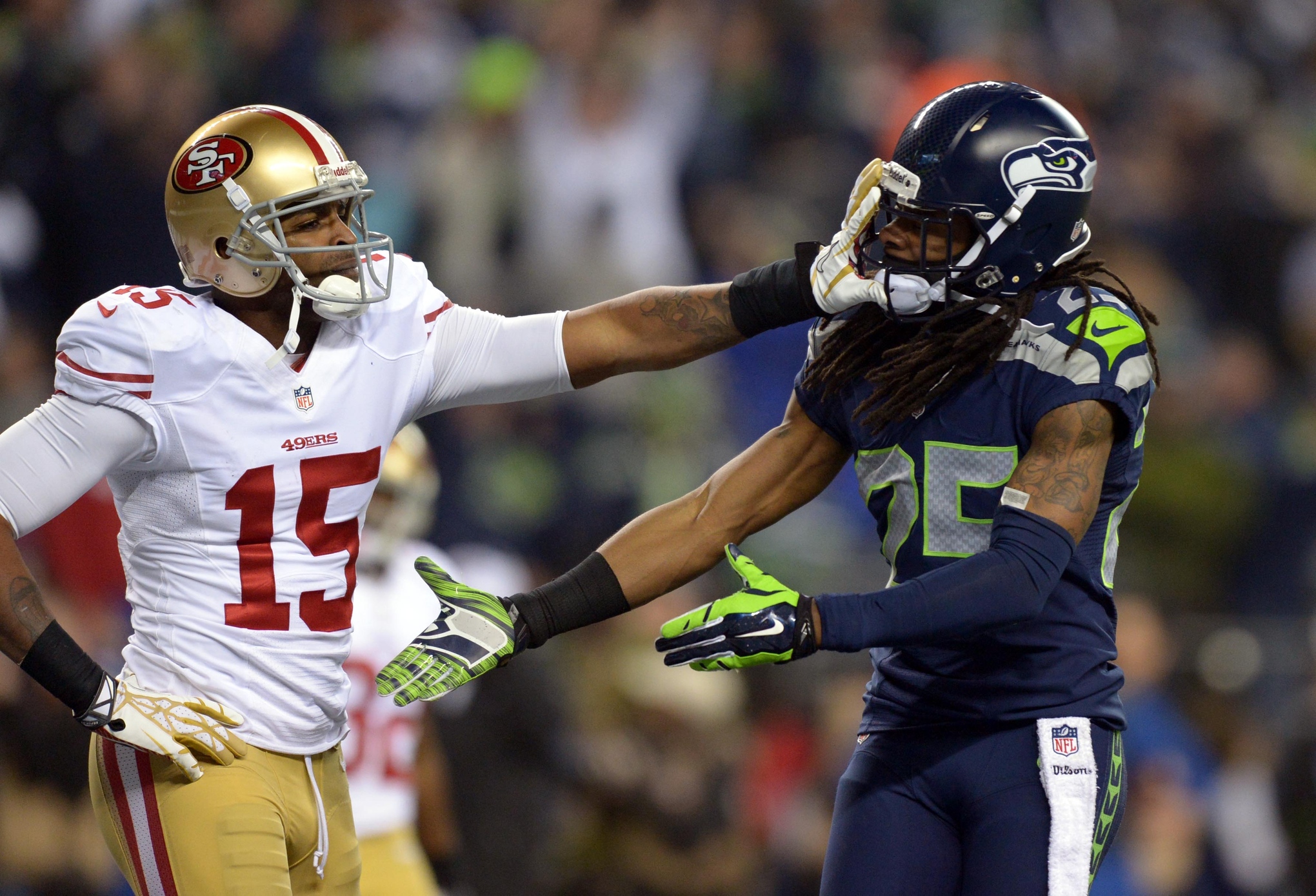 Obviously, the entire world knows what happened next: Sherman was interviewed by Erin Andrews and ranted about how "sorry" Michael Crabtree is as a receiver.

As alluded to above, former NFL player Willie McGinest recently shared what he knew of the incident on a podcast with Rich Eisen, who was teasing the video segment you see above.

Do you know why he was pissed (after the game, during the interview), Rich? Did he give you the full story?

What happened was - it was a pool party of some sort at a charity game for Larry Fitzgerald. Sherman came into the event and he was shaking hands. He's friends with a lot of the San Francisco 49ers. So he's shaking hands with some of the guys, saying "what's up?"

Whatever had happened prior in one of the games - a little talk [between Sherman and Crabtree] - Sherman had forgotten about it, and he went up to Crabtree.

-- This is what I'm told from guys that are really, really, REALLY close to the situation --

And he was like, "What's up Crab?" And Crab said, you know, certain things I can't say, "Get your so-and-so hands out of my face", and Sherman was like "dog, what's wrong?" Richard had totally forgotten what had taken place. And Crabtree continued to go on, and on, and on, and kind of challenged him to say, "I should kick your you know what right now". And they got going back and forth.

Once it started back and forth, [Sherman] was like, "You know what? I don't want to disrespect Larry's event, when we see each other, I'm going to kick your you-know-what on the field. blah blah blah".

So, this game, the NFC Championship happens -

I see where you're going. This gives extra context to the extension of the hand!

(... by Richard Sherman, after the play, pictured above). As an aside, this is the part that makes total sense to me. In effect, the handshake was a followup to Crabtree's disrespectful refusal to shake his hand at Fitz's party. We could debate Sherman's motives or intentions till the end of time (not that it really matters), but that's my read on it. It was McGinest's read too, based on what he was told.

So now it's become the twitter thing, everyone's going back and forth, [but] it [was originally] like, "If I get you, give me my props, if you get me, I'm gonna give you yours."

So, it comes down to the final play, Sherman wins the play, he goes over, "It's over, we won, give me my props, blah blah blah, good game," and not only did [Crabtree] mush him, some words came out as well, and that's when Richard Sherman lost it.

A lot of people don't know that there were a lot of words exchanged before Richard Sherman went on his rant, and it was disrespectful.

That's McGinest's version of events based on his sources, but they match up with essentially everything else out there on it.

"Richard was at the charity event with people like Snoop Dog and (former 49ers receiver) Kyle Williams,'' Branton Sherman said. "Richard's a friendly guy, and he saw them sitting around a pool and went over to shake everyone's hand.

"When he got to Crabtree, Crabtree slapped Richard's hand away and stood up like he wanted to fight. Everyone was like, 'Calm down, Crabtree.' Richard said, 'Why are you tripping out. We're off the field.'

"Crabtree wanted to fight but everyone got in the way and backed him down.

"Richard told me about it down the road. He told me he would do Crabtree in the media, and he did. (FOX) caught him right after the game.

"They have a personal vendetta against each other."

Of course, Branton is biased, and we know how reliable first-person accounts can be. For the other side of it -- if there is one -- according to a anonymous-sourced report by Dom Cosentino of NJ.com, it was Sherman that appeared to start the fight.

A source who was at the Fitzgerald charity event - and who has no familial or professional relationship to Sherman or Crabtree - witnessed part of what happened and said it looked more like it was the other way around.

"The handshake part is legit," the source said, "but it was Sherman who tried to start the fight with Crabtree. I remember 'cause Sherman kept getting in his face and Crabtree was just laughing about it."

That may be. Perhaps Sherman did get in Crabtree's face and "try to start a fight," but every report out there does corroborate the fact that Crabtree refused to shake Sherman's hand, which is undeniably a gesture of disrespect. Sherman probably should have laughed it off, but we've seen how he reacts when he feels disrespected. He's made a career on talking trash to those he feels disrespect him: Jim Harbaugh, A.J. Green, Tom Brady, Pierre Garcon, Jim Harbaugh, Trent Williams, Jim Harbaugh, the list goes on.

Bottom line, Sherman didn't appreciate this unmistakeable "f*ck you" from Crabtree, and that's where things got heated. Regardless of who "started it," -- Crabtree may have been salty about what Sherman had said to him in a previous game and felt that was his relaliation -- the background of the incident explains what happened on the field after the tip was securely in Malcolm Smith's hands. What happens next will go down in sports history.

Oh, and most people don't actually realize it was his second interview after the tip. This interview is way better, in my opinion.

Let's get a replay of that hug:

And, directly after the hug, here comes the live FOX TV broadcast interview.

Good times. Definitely one of the most memorable moments in Seattle sports history.