Michael Gervais on the psychology of pressure

"It felt like we were sharing a brain; the language was in sync, the ideas were in sync. This balance between technology and modern understandings grounded in rich science, but also grounded in the traditions of the ancient wisdoms. And, it was really refreshing. At the end of it, he said, 'what do you say we build a masterpiece together?'" - Michael Gervais, recollecting the first dinner he had with Pete Carroll

Share All sharing options for: Michael Gervais on the psychology of pressure

Pete Carroll hired Michael Gervais as the Seahawks' official psychologist and he proselytizes all these ideas on, probably, an every day basis. Carroll is very careful about the messaging that he sends his players constantly, and you can hear Gervais say many of the key words that Carroll repeats frequently.

The concept that Gervais talks about in this video is finding a discipline in self talk, in your thoughts, getting rid of self-appointed pressure and, to put it into a catch phrase that Carroll has borrowed, 'play in the absence of fear'. No self-doubt, no moment is bigger than the next. Trust the process. Trust what you've practiced. Control what you can control and that's the only thing you can worry about. You hear Seahawk players say this all the time.

As I wrote just following the Seahawks' Super Bowl win, this is a big deal for the Seahawks and it is a central, central part of Pete Carroll's 'program.'

Carroll has meticulously and deliberately developed, over the past decade-plus, the culture and mindset of his team(s) to adopt the philosophies of his own Win Forever doctrine. In Carroll's own words, "what WinForever means ... is aspiring to be the best you can be, or as I like to refer to it, maximizing your potential.' But Winning Forever is not about the final score; it's about competing and striving to be the best. If you are in this pursuit, then you're already winning." 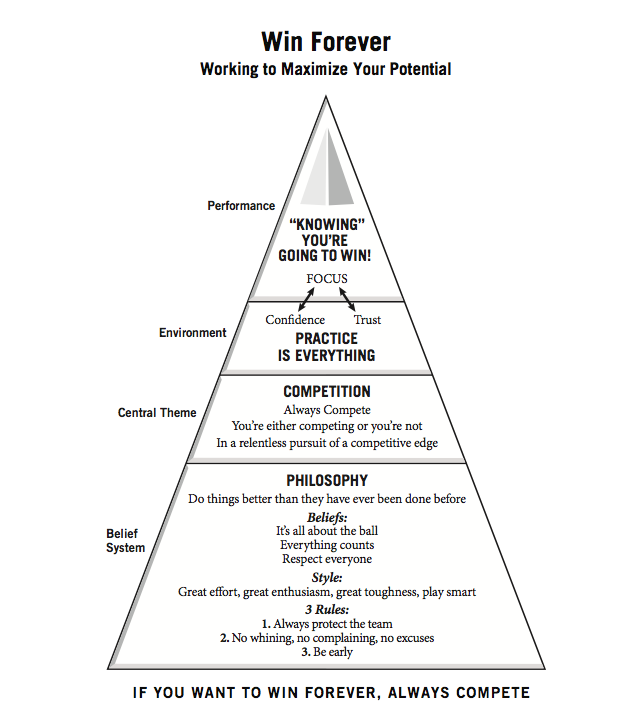 He has meshed Win Forever with many aspects of Timothy Gallway's The Inner Game of Tennis, which has been a huge impact on Carroll's entire world-view. The Inner Game is focused on quieting your mind and expelling all doubts and playing in the absence of fear. I would actually really recommend taking the time to listen to this video below that gives a synopsis of the book, because it's was a huge influence from which Carroll developed his philosophies.

As noted above, Carroll has also contracted Dr. Michael Gervais, a sports psychologist, to work with the team closely (he works closely with Russell Wilson weekly), and the Always Compete mentality is pervasive in VMAC.

If you're interested in this kind of thing, here is some more -- and again, for background into Pete Carroll's system, this is pretty invaluable context: