It's 10:15 PM. I had to tweet a local sports radio personality today about the proper pronunciation of the word "behemoth". And the Seattle Seahawks are 2-1.

Week 4 of The Watch is upon us.

Last year, the Seahawks were among the last group of teams to get a week off, and that allowed us to have a very clear picture of what needed to happen in order to clinch everything we wanted to clinch. This year, however, the season is still quite young as the Hawks go into their break, so whatever happens in the upcoming games will have little immediate effect on the team's prospects. Especially since two other divisional rivals - the 3-0 Cardinals and the 1-2 Rams - are also dormant this week. That makes this week's edition of The Watch a little light on the forward planning, as only seven of the 13 games on this week's schedule have any real effect on the Seahawks going forward (and two of them only tangentially so). There's still a lot of gridlock in the playoff picture, however, so there's quite a bit to talk about.

Last week couldn't have gone much better for the Seattle Seahawks, results-wise. Winning their own game against the Broncos washed away the sour taste we had in our mouths after the loss from the week before, and avoided a rather ignoble statistic (namely, that the Seahawks have never made the playoffs after a 1-2 start). The Rams lost a heartbreaker against the Cowboys, and the 49ers were handled adeptly by the Cardinals. Arizona still leads the division at 3-0, but with them also being on a bye we can rest easy knowing they can't extend their lead on us. The NFC North looks once again to be a slugfest, although a perennial contender in the group is uncharacteristically struggling, and the NFC East has the potential to be a boat race, if not for a team that everyone thought was going to be a lot worse than their record has them right now.

Here are the standings for the NFC after three weeks of play:

With six teams at 2-1 and seven at 1-2, there's bound to be a lot of convoluded tiebreakers. Here's how they all get figured out:

1. Arizona and Philadelphia are the last two undefeated teams in the NFC. Since they naturally tie for conference record, the first viable tiebreaker is strength of victory. The Cardinals have beaten San Diego, San Francisco, and the Giants, for a combined record of 4-5. Meanwhile, the Eagles have beaten Washington, Jacksonville, and Indianapolis, which is a combined 2-7, thus giving Arizona the top seed.

2. Atlanta and Carolina are now tied for the NFC South at 2-1. Having not played each other yet, being perfect in the division so far, and having both played (and beaten) Tampa Bay, conference record ends up being the deciding factor. The Panthers are 2-0 against conference opponents, while the Falcons are only 1-1.

4. This leaves the Bears, Cowboys, Falcons, and Seahawks all vying for the two Wild Card spots. Dallas is the first to drop out, as they have one conference loss while the others are undefeated. Strength of Victory is where the other three teams separate: the Seahawks have a 3-3 strength of victory (vs. Green Bay and Denver), the Bears take second Wild Card with an SOV of 2-4 (San Francisco and the Jets), and the Falcons fall to seventh because their two wins come against opponents with one win between them (New Orleans and Tampa Bay).

5. There's a seven-team logjam at 1-2. Because division standings take precedence, the North, West, and East divisions need to be resolved first. (The Saints are all alone in the NFC South at 1-2.) The 49ers beat out the Rams with a common opponent tiebreaker (SF beat the Cowboys, the Rams lost to them). The Giants beat out Washington on strength of victory (2-1 HOU vs. 0-3 JAC), while the Vikings beat out the Packers by virtue of conference record (1-1 vs. 0-2). Between these four, Minnesota has the strongest conference record. San Francisco and New Orleans tie there, but the 49ers beat stronger opponent (2-1 DAL vs. 1-2 MIN), and the Giants are winless in the conference. For the other three teams, the Rams have a conference win, the Packers' win came against the 1-2 Jets, and Washington is winless in the conference and beat a winless opponent.

This could very well be the most hotly contested race for the #1 pick we've seen in a long time. Here's how the draft order looks so far: 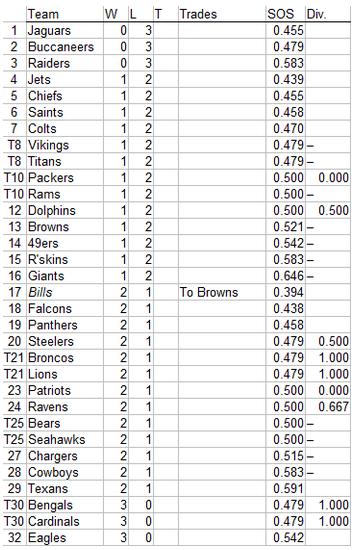 (Strength of schedule is found by totalling the win-loss records of all 13 opponents on a team's schedule. Divisional opponents are given double weight. Divisional record breaks any ties, followed by a coin flip.)

After jumping out to an early 17-0 lead against the Eagles in week 1, the Jaguars have been outscored 27-119 since. The Raiders managed to make a game out of their recent tangle with the Patriots, but ended up falling short and are also at 0-3. The Buccaneers have looked every bit the hot mess that they resembled in the early going of last year. With none of the three teams facing each other on the schedule, it's theoretically possible that all three of them could go the entire season without a win. Of course, that's a pretty astronomical long shot considering that only one team has done it with a 16-game schedule, but none of them have shown any real proclivity to pull out of their own individual tailspins any time soon. Here are the remaining games on each team's schedule:

How many wins do you see coming from each team? The Jags might snag a game from the uninspiring Titans, and might catch the Dolphins and Giants napping, but that's only three. The Raiders' only hope looks to come from the two AFC East opponents they have yet to play. The Bucs have two winnable games - Washington and Minnesota - and that's only if the Vikings are still in QB and RB turmoil by the time they play them in Week 8. Keep your eye on this situation, as it has the potential to turn into one of the more entertaining sideplots of the season.

With no Seahawks game to get personally invested in, and only one divisional opponent playing, the pickings this week are a little bit slim. Nonetheless, if you're looking for the Seahawks to be in as strong a position as possible when they get back into the game, here's what you'll want to root for in the current slate of games.

Thursday night: Giants (1-2) at Washington (1-2)
Neither team figures to be in the playoff conversation this year, so rooting for a winner here has little to do with seeding and more to do with short-term needs. Seattle is flying to the dirt minefield that is FedEx Field in week 5, and to that end I'd rather not play against a desperate team. Even in the NFC East, a 1-3 record might be enough to doom a team to irrelevance, and I'd rather not see that happen just yet. Go Washington.

Sunday morning: Panthers (2-1) at Ravens (2-1)
Could the NFL schedule makers have had any worse luck than they'd had the past couple of weeks? Literally the day after the Ray Rice story exploded, there were the Ravens on prime-time network television. Two weeks later, Baltimore now goes up against a team that's had its own trouble with misbehaving players. Speaking purely on an emotional level, I'd probably root for this game to be cancelled on account of locust infestation, but since that's unlikely to happen I'll go with the standard rule of rooting for the AFC over the NFC. Go Ravens.

Sunday morning: Packers (1-2) at Bears (2-1)
I'll come right out and say it: the Packers do not scare me this year. And not just because of the runaway victory we had in the season debut, but simply because I don't think this Packers team is any better than the one that went 8-7-1 last year and barely snuck into the postseason. The Bears, on the other hand, have an offense(!) that's starting to look legit - even with Jay Cutler at QB. Time to knock them down a peg. Go Packers.

Sunday morning: Lions (2-1) at Jets (1-2)
Could this be the year that Detroit finally wins a division title? Last week showed that it's really only a two-horse race, and even though I just talked up Chicago in the last game, they're not what I'd call a serious threat to upset the applecart. Personally, it'd be cool to see it happen, but as long as Suh and Fairley are still on that defense, I want them to stay as far away from Russell Wilson as possible, and that means no meeting in the playoffs. Go Jets.

Sunday afternoon: Falcons (2-1) at Vikings (1-2)
The only way we'll see either one of these teams is in the postseason. And while Atlanta may not be a contender this year, they're definitely the scarier team of the two. Go Vikings.

Sunday afternoon: Eagles (3-0) at 49ers (1-2)
Once again, we're put in the uncomfortable decision of choosing between a hated rival and a team that could challenge us for homefield advantage (if not the division). While I'm not going to root for the 49ers just to make sure they're in as deep a hole as possible, this will be the last time I give a team with a better record than Seattle the nod unless the circumstances are similarly severe. Go Eagles.

Sunday afternoon: Saints (1-2) at Cowboys (2-1)
Don't look now, but Dallas is just a game back of the division lead. After their disastrous loss in Week 1, there was serious talk of the Cowboys going 0-16. I don't think they're going to end up winning the NFC East, but someone's got to put some pressure on Philly - besides, the Saints are much like the 49ers in the sense that we need to throw as much dirt on them early as we can so the chances of them concussing one of our receivers in the playoffs again are nil. Go Cowboys.

That'll do it for The Watch this week. Even this early into the season, the fights for the division and homefield advantage look to be daunting. We'll see if Seattle comes out of this week smelling as well as they did in the previous one.