Seahawks vs. Packers: The Experience

Sean Larson was at CenturLink Field on Thursday night for Seattle's big win over the Packers. This is the story of the game through his eyes from the nosebleed seats.

Share All sharing options for: Seahawks vs. Packers: The Experience

When I woke up yesterday, I had no intention on going to the Seahawks game. The last time I had looked at tickets, you couldn’t get in for much less than $400 per seat. As much as I wanted to, that was just out of the question.

Then, while sitting at my desk at work, I figured I’d humor myself and check one last time, just out of curiosity. I went to StubHub, and my eyes lit up. Ticket sellers were getting desperate to sell their seats and prices were falling. I scooped up a couple nosebleed seats for a little more than $200 per seat, the most money I’ve ever spent on a single sporting event. I instantly began to freak out on the inside.

I had already left the office early to go take in all the pre-game festivities down in Pioneer Square, but suddenly I had tickets to the hottest sporting event in town since the NFC Championship Game back in January. We walked around, snagged some food ($3 for a giant hot dog on the street is a great value in my eyes) and took in a little of the pre-game concert. I get that they’re a local band, but I honestly thought my ears were bleeding listening to Soundgarden. Their first song sounded more like the sound of a dying horse rather than music.

Rather than wait for Pharrell Williams and his hat, I headed into the stadium around 4. We made the climb to our seats in 316, row W, seats 41 and 42. The view was actually great. We had an awesome view of the field where we could see all the plays develop and had a nice view of downtown and the Space Needle while soaking up the late sunshine. 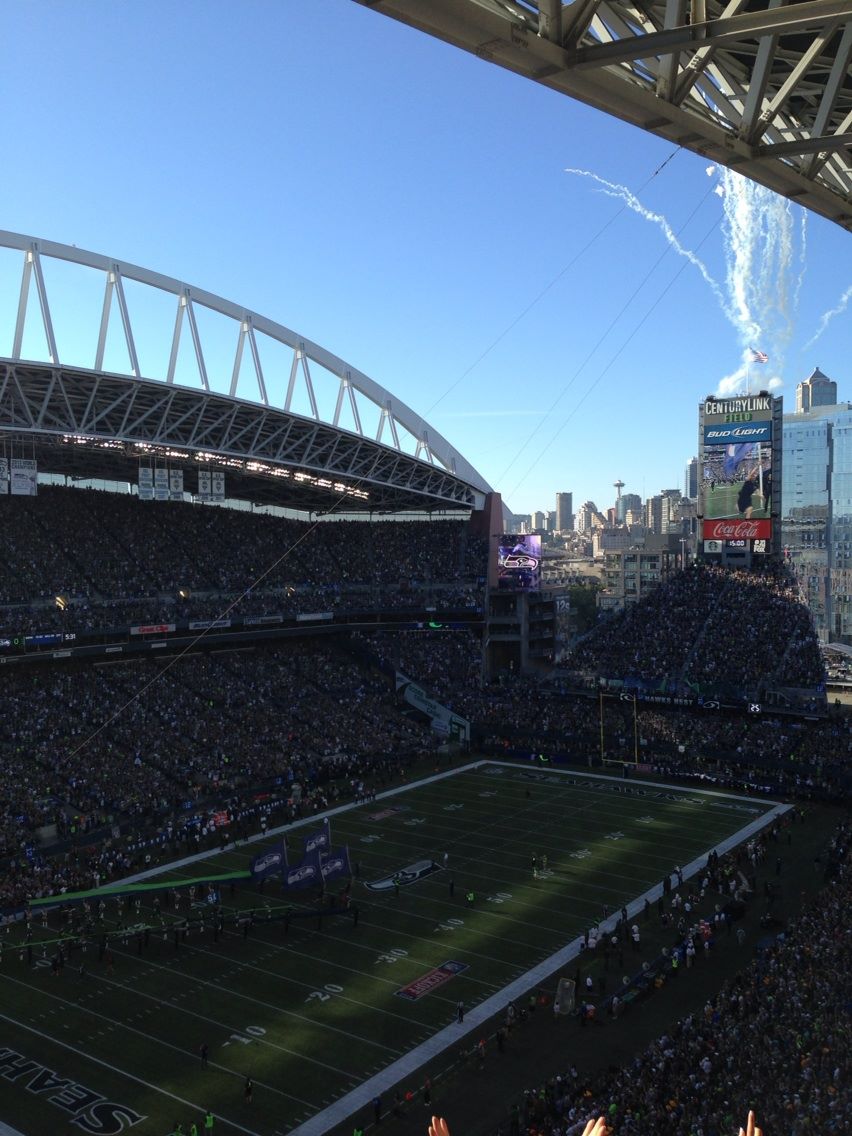 By 5 pm, there was not an empty seat in the house. The pre-game ceremonies began by the Hawks Nest pulling a giant Super Bowl Champions flag over the section. Let me tell you, if I paid hundreds of dollars to this game and couldn’t even see the banner unveiling because I was stuck under a giant flag, I’d be pissed. But hey, it looked cool for everyone else. The black drape over the banner dropped, and there it was. Seattle Seahawks. 2013 World Champions.

One last look back to 2013: A new banner for @CenturyLink_Fld's rafters. It's Super. #SuperBowlChamps https://t.co/fyY2eJWkKo

I’ve been fortunate to witness some great moments in person at sporting events. I’ve yet to witness something more special to me than being at the Rose Bowl when Oregon beat Russell Wilson and Wisconsin for their first Rose Bowl win in 95 years. Russell, I love you, but thank you for not spiking the ball quick enough because I’m sure you would’ve thrown a touchdown pass had they given you one second to work with. This ranks right behind it though. I’ve never seen a championship banner unveiling in person, much less the first one ever in my team’s history. That moment alone made the price of the tickets (and my Ramen dinners for the rest of the month while my bank account recovers) worth it.

Then, the game got underway. As the ball was teed up for the opening kick, CenturyLink Field got LOUD. Like, ears are hurting, can’t hear yourself think loud. Green Bay’s first plays from scrimmage, along with the first 3rd down of the season were a couple of the loudest moments of the game. When the Seahawks took over and everyone sat down, I was convinced I actually had temporarily lost a bit of hearing. I went to college football games for five years at Autzen Stadium, known for being one of the loudest stadiums in the nation. I thought I knew what "loud" meant at a football game. I was mistaken.

The loudest individual moment of the game to me seemed to be when the Packers decided to go for it on 4th and 5 on Seattle’s 41. I think being in no-man’s land, it was the right call at the time, but it backfired on Green Bay and totally swung the momentum. I’m not saying the Packers had momentum on their side at that moment, but it had still been a back-and-forth game to that point. Had Green Bay kept driving to the end zone, it would’ve been a 20-17 game in Seattle’s favor. Instead, the Seahawks took control and put their foot on the gas pedal. Green Bay’s only other score of the night would be a short touchdown pass with 9:37 remaining and Seattle already leading by three scores.

The Packers fans all started to leave as it became clear there would be no last second desperation passes to the end zone. Might as well beat the traffic, right? There are few things sweeter than seeing the look of defeat in your opponent’s eyes, and that goes for fans, too. Although I must say, most of them were quite friendly and the couple next to us congratulated us on a good game as the final seconds ticked off.

Now, I sit back at my desk in the office, drinking two Red Bulls and trying to limit the amount of talking I do as I’m pretty sure I sound like I smoked two packs of cigarettes at the game. Go Hawks.